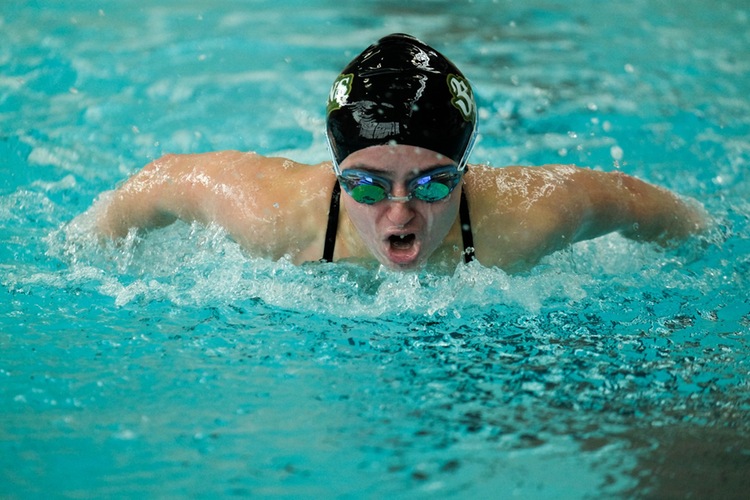 The Lady Barons of Franciscan University’s swim and dive team took to the pools one final time to compete in the AMCC Conference Championships, a four-day series of events which began on Feb. 14 and concluded on Feb. 17. Ultimately, the team placed fifth out of six conference teams, under new Head Coach Chris Zedick, collectively posting a total score of 171 points.

Junior Sarah Tohill, the only permanent diver on Franciscan University’s swim and dive squad, came in second among all divers in the 1-meter diving series. She posted a total score on 281.95.

It was up to last year’s record-holder, decorated senior swimmer Elizabeth McNulty, to defend her first-place finish in the 200-yard butterfly; she did so, posting a blistering time of 2:21.49. McNulty further took first in the 200-yard breaststroke, posting a new university program record with a time of 2:38.85. She found the podium again later in the week’s competitive proceedings, placing third in the 100-yard butterfly with a time of 1:01.14.

The 400-yard medley proceeded shortly afterward, a relay in which each swimmer takes on a 100-yard stretch with a different stroke. The Lady Barons’ team of senior Emily Allsteadt, senior Abby Commarford, senior McNulty and Shannon Wieszczek took fifth overall, finishing with a time of 4:56.02.

The combination of Commarford, Allsteadt, McNulty and Wieszczek took on the 800-meter freestyle, where they also finished sixth at a time of 4:22.11.

Allsteadt took on the lengthy 1650-yard freestyle, where she posted a time of 20:28.89, good for seventh place among her conference competition. She further placed seventh in the 500-yard freestyle, with an impressive 6:00.18 finish. Allsteadt rounded out her productive AMCC Championship results portfolio with a 10th place finish in the 100-yard backstroke at a time of 1:14.29.

2018-02-25
Previous Post: Student Sports Column: So you think Christ can’t dance
Next Post: New movie “I Can Only Imagine” debuts on campus