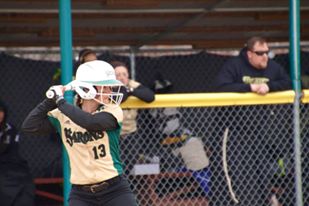 Despite the games ending 16-1 and 17-1, respectively, the Lady Barons played well on defense, holding the bases several times in cold and windy conditions.

“Lindsey (Finch) played very well defensively,” said Head Coach James Walker. “Anna King did a really good job defensively as catcher. … They were a good-hitting team. Our pitchers didn’t always hit their spots and when they didn’t, that team makes you pay for it.”

The Lady Barons made few errors defensively and made key plays to snag outs when it really mattered. Finch, a sophomore, caught several hits at shortstop to make the out in both games, eliminating the opportunity for the opponent to bring in more runs.

King, a freshman, remained solid as catcher behind home plate letting almost no pitches past her.

Junior Jordan Cunningham started pitching the first game, but after the Lady Spartans caught on to her pitching style, senior Molly Clarahan was substituted in to pitch at the top of the third inning.

Cunningham made her switch to second base known as she snagged a line drive and made the out at first base. Clarahan held the Lady Spartans off for the last two innings only allowing one more run.

Freshman Amanda Pulice pitched the entire second game, catching a line drive, and making several outs. The Lady Barons continued to exhibit impressive defense in the top of the third as they shut down the Lady Spartans by only allowing a single that inning.

Sophomore Cecilia Lademan scored the only run in the second game as junior Renee Shumay cranked a double out to the fence in right-center. Lademan hit the same gap getting a single two batters before Shumay.

“(McHenry) was probably throwing in the mid-sixties (miles per hour),” Walker said. “She’s really good – a returning pitcher of the year. And even as bad as the scores were, I do feel like we got better today. As good as the pitcher was, we put the ball in play quite a bit, and that’s something we worked on yesterday, making sure that we identify her pitches and put them in play.”

The Lady Barons continued to fight hard in both games, even though they were behind. The wind and cold did not discourage them from playing their hardest.

“We really never quit,” said Walker. “The girls never quit. No matter what the score is, we play hard, and as long as we keep playing hard, good things are going to come.”

The Lady Barons next host a doubleheader against Penn St.- Altoona on April 5 at 3 p.m.