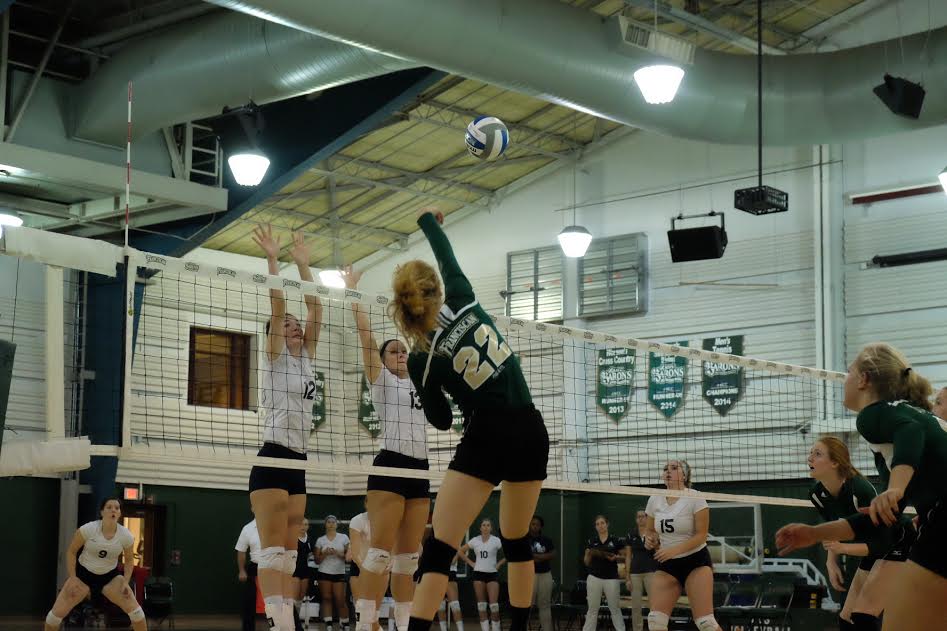 The Lady Barons volleyball registered a 3-1 win over Mt. Aloysius on Wednesday evening, taking a 3-2 conference record into the AMCC postseason tournament.

“The game took a couple of years off my life,” said head coach Kelly Herrmann. “I just want to see the girls be successful because they deserve it and they work hard. Those girls love volleyball and they love each other … I was really proud of how they battled and stayed positive.”

In the third set, the Lady Barons took a short-lived 7-3 lead before the Mounties rallied and earned an 11-9 lead. Franciscan was able to keep the score close, down 18-17, but they couldn’t clinch the lead again, giving the Mounties their only set of the evening, 25-21.

In the final set, Mt. Aloysius took a 7-3 lead, but the Lady Barons quickly tied the set 11-11. Mt. Aloysius made another jump to lead 20-15. Freshman Maddy Demos took the service line and pulled the Lady Barons score to within one; they then took a 23-22 lead after an attack error by Mt. Aloysius. Every point was impactful as the Mounties evened the score at 23-23.

Franciscan earned their first match point off after a kill by sophomore Maria Ciola, but Mt. Aloysius responded by taking two more points to lead 24-25. Freshman Roz Pridemore and sophomore Becca Haven took back to back kills to earn a second match point for Franciscan, at 26-25.

Sophomore Theresa Moore took the service line for the last serve of the game, and an attack er-ror by Mt. Aloysius concluded the game 27-25, giving the Lady Barons the 3-1 win.

“Managing our errors is the key. Volleyball is a game of errors,” said Herrmann. “I really liked how we blocked the ball … The whole team did well. There were way too many serving errors. Some areas we were on, we were just off in that area, but you have days like that so we’ll get better.”