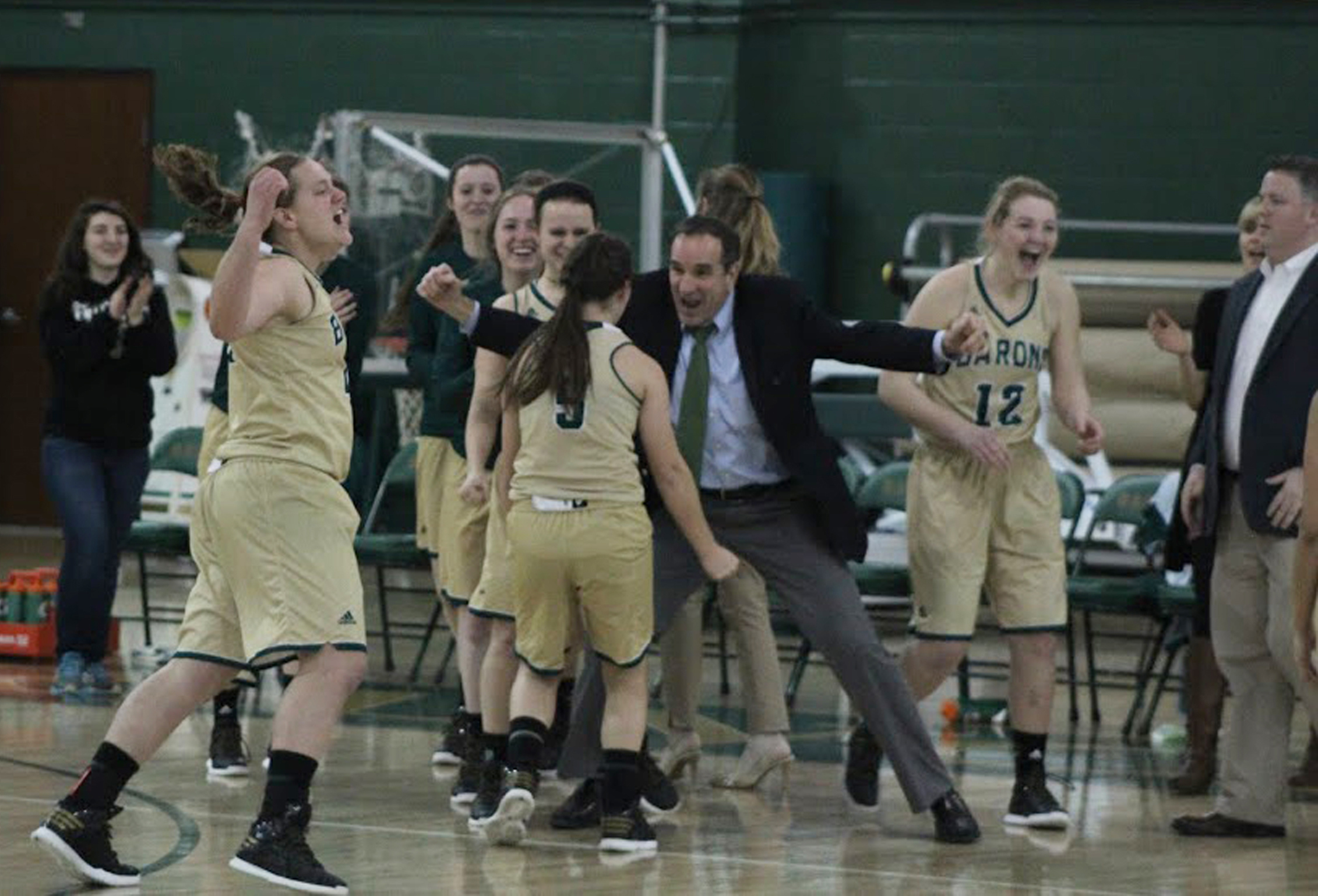 Franciscan University’s women’s basketball team was able to make a late comeback at home Wednesday to upset the University of Pitt.-Greensburg, winning by a final score of 64-60.

The Lady Barons came into the matchup sitting at seventh place in the conference while the Pitt.-Greensburg Bobcats began the night tied for second place with the University of Pitt.-Bradford.

In the teams’ previous matchup, Pitt.-Greensburg was able to win comfortably on its home court with a final score of 69-48. Franciscan’s win Wednesday marked the first time in program history that the Lady Barons were able to beat the Bobcats.

“Tonight we got great contributions from so many people,” head women’s basketball coach, Suzy Delaney said. “I am so proud of our ladies tonight to come back from down 12 and play so clutch in the final 10 minutes.”

Most of the drama and excitement came in the second half, but, to end the first half, junior guard Monica Dawyot was able to sink a long three-point basket at the buzzer, sending the Lady Barons into the locker room with a 24-24 tie. The junior had one of the best games of her career with 10 points, four rebounds and also four steals.

“I was especially proud of the complete effort we had from Monica Dawyot tonight,” Delaney said.

However, the Lady Barons struggled to start the second half with the same level of intensity, allowing Pitt.-Greensburg to build a 13-point lead over the first nine minutes. Freshman guard Sarah Schriner was able to start a Franciscan comeback with 10 minutes and 28 seconds remaining in the game.

“When we were down 12, Schriner jump-started us with a key three-point play,” Delaney said. “She came up big throughout the second half.”

Schriner had 13 of her 15 total points coming in the second half, improving on some poor performances in the last couple of games.

However, the Lady Barons comeback was not complete without the leadership of veteran sophomore guard Iliana Gonzales and senior forward Lacey Huck. A combination of jump shooting, lay-ups and free throws by both players kept putting the Lady Barons ahead in the last two minutes as the Bobcats were able to keep up, point for point.

Gonzales was the second leading scorer on the night with 13 points while Huck contributed 10 points and eight rebounds.

“We had foul trouble for Lacey tonight,” Delaney said, “and we don’t win without her playing the final eight minutes with four fouls and coming up with great defense and two key baskets.”

Taking a look at conference standings, Pitt.-Greensburg drops to third place and the Lady Barons now move into sole possession of sixth place with five conference games left. Franciscan remains in the playoff hunt, hopeful for its first-ever appearance in the conference tournament.

The Lady Barons look to build off this win and continue their strong team play on the road against Penn St.-Behrend Feb. 7 at 2 p.m.