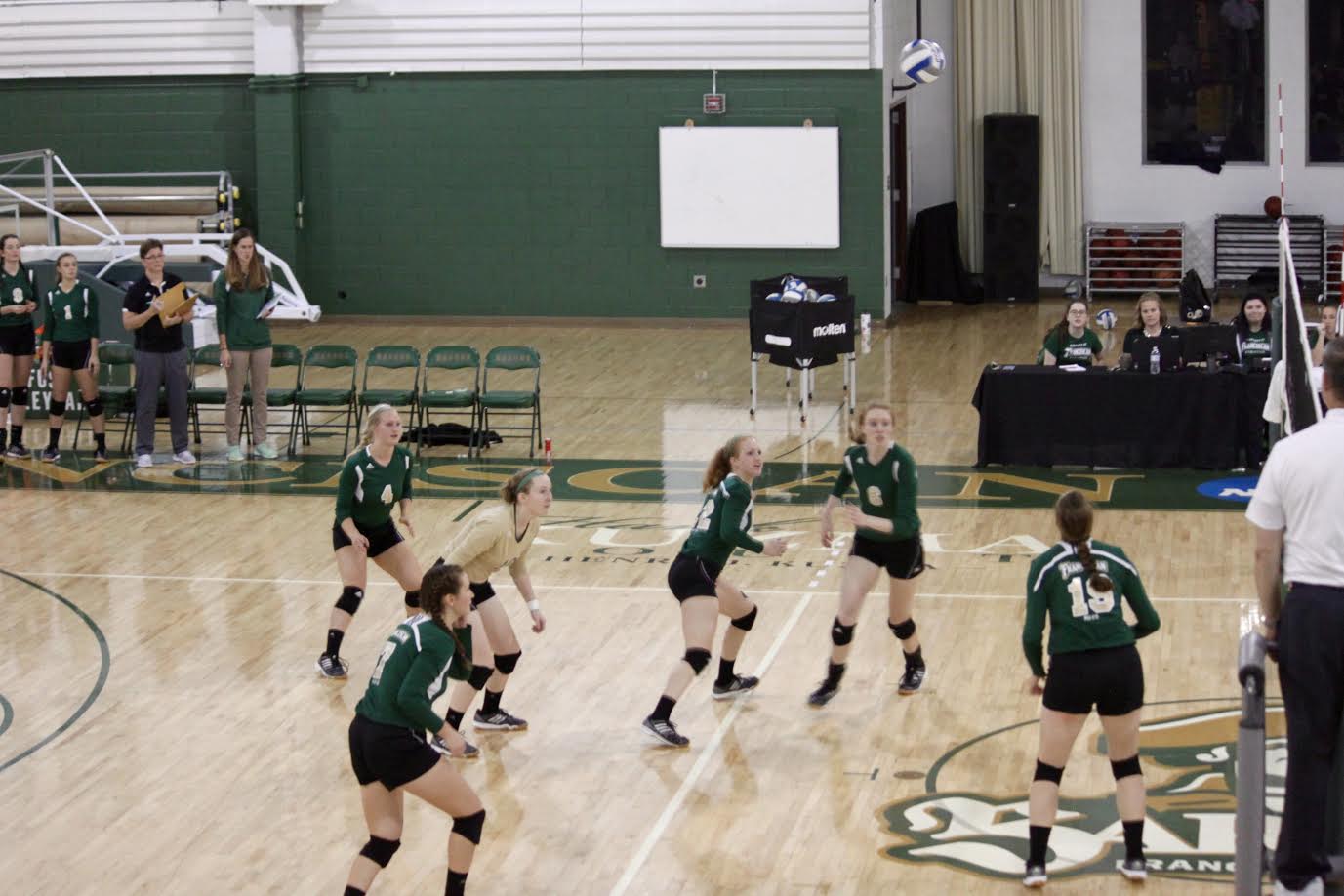 In a tough match against the visiting D’Youville Spartans, Franciscan fell 3-2 in the 2016 AMCC quarterfinal volleyball match on Wednesday, Nov. 2.

The Lady Barons concluded their 2016 fall season with a 7-21 overall record. It is their sixth season in the AMCC tournament.

Franciscan struggled at the beginning of the first match, as the Spartans established an 11-5 lead. The Lady Barons were able to nab a few points before a kill from D’Youville’s Julie Fleming put the Spartans up, 18-15. A Spartan service error gave the ball back to the Lady Barons and sophomore Maria Ciola served seven straight points from the service line, giving the Lady Barons a 22-18 lead. A kill from D’Youville allowed them to earn the serve, but Franciscan kept fighting and won the set 25-22, taking a 1-0 lead.

The Spartans’ offense came out strong in the second match, building a 10-3 lead. However, sophomore Theresa Moore took the service line and served four straight aces, narrowing D’Youville’s lead to 10-7. After a couple of sideouts, freshman Maddy Demos took the service line and served up an ace to get Franciscan within a point of D’Youville. The Lady Barons were not able to catch up, only scoring one more point in the set. The Spartans’ 10-point run concluded the set, 25-12.

Clutch serving by Demos at the service line gave the Lady Barons a 16-9 lead in the fourth set. Demos lost her serve, but a kill from freshman Maddie Raffa and a three-point push at the service line from senior Rachel Potopa extended Franciscan’s lead to 20-10. The Spartans were able to earn 3 points, but the Lady Barons continued to push for a 25-13 win and took a 2-1 set lead in the match.

In the fifth and final set, Franciscan took a 4-0 lead before the Spartans tied it at 5-5. Two straight points from the Lady Barons gave them a 7-5 lead, but again the Spartans tied it and took two more points, taking the lead. Back to back kills from freshman Roz Pridemore and Ciola tied the set at 9-9 before D’Youville took 4 straight points to take the 13-9 lead. D’Youville then took a kill and took advantage of a Lady Baron hitting error to conclude the match and earn the Spartans a win. They also advanced to the AMCC semifinals.

Ciola led Franciscan with 15 kills for the evening and Raffa had 11. Potopa handed out 19 assists while Haven had 18. Ciola posted a double-double with 24 digs and senior Mary Moore added 23.