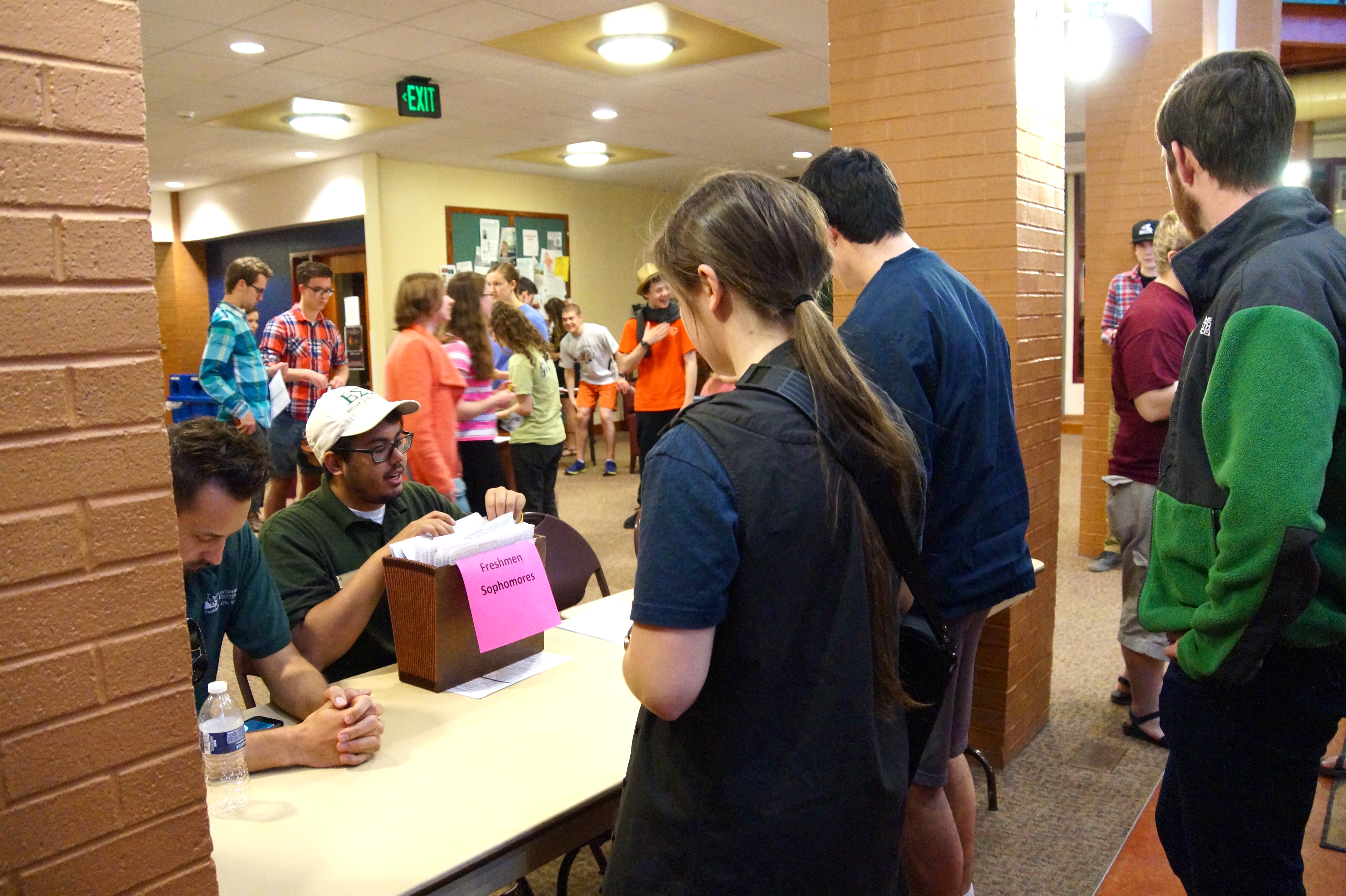 Franciscan University’s Student Life opted to go with a lottery-based system for this year’s housing fair in the J.C. Williams Center on April 15.

This was a switch from a previously used method of a first-come-first-served basis. This semester, students were assigned a lottery number based on their class ranking and were given a time based on that number to select their housing.

The higher a student’s class ranking, the better the time he or she received. If a younger student wished to room with an upperclassman, he or she was allowed to attend the better time.

Most residence halls had fewer spots open for seniors and juniors than they did for underclassmen. For instance, St. Thomas More Hall only had two beds available for seniors. Most of the upperclassmen that live in the residence halls are in households.

The fair went from the atrium into the Gentile Gallery. The general mood of the event was positive, with residents waiting patiently and resident assistants and other members of Student Life overseeing the event.

Resident assistant Katie Hernon said that compared to past housing fairs this system was “much more efficient and running super smooth.”

In past years, people would devote the entire day of the housing fair to obtaining the spot they wanted. For hours before the start of the fair, students would camp out in front of the J.C.

Friends would switch off for classes throughout the day, but the line would stretch from the doors of the J.C. to the steps leading up to St. Francis Hall. Students would talk, nap, study and play guitar and Frisbee.

The event might have been considered memorable but was by no means efficient. Many students have complained about and even dreaded the original method of the housing fair. However, this year, students reported being satisfied.

“It’s a lot better this year, no one is sleeping outside,” said student Rachel Recuero.

In past years, students would arrive at the fair as early as 3 a.m. This year, no one went to extreme measures as they were assigned a time.

Being randomly assigned a time has seemed to bode well with the student body.

The residence directors of each of the halls were stationed around the inner perimeter of the Gentile Gallery accompanied by a couple of their resident assistants. Only a few students were allowed in the gallery at a time. By about 7:30 p.m., most of the Upper Campus residence halls were out of upperclassmen spots. Most of the older students will be housed on Lower Campus.

Leo Bond, residence director of Trinity Hall, said, “(This is my) first time at Franciscan’s housing fair. It seems to be going very well. I’m surprised how quickly we are running out of space. (I guess) that that is the advantage of being in household.”

Students who live in the Assisi Heights, on household wing or in St. Thomas More Hall’s lofts and suites are housed prior to the housing fair.

Bond said, “Students should feel eager to give feedback … but there haven’t been any major complaints.”