March for Life 2018 an experience of hope and community 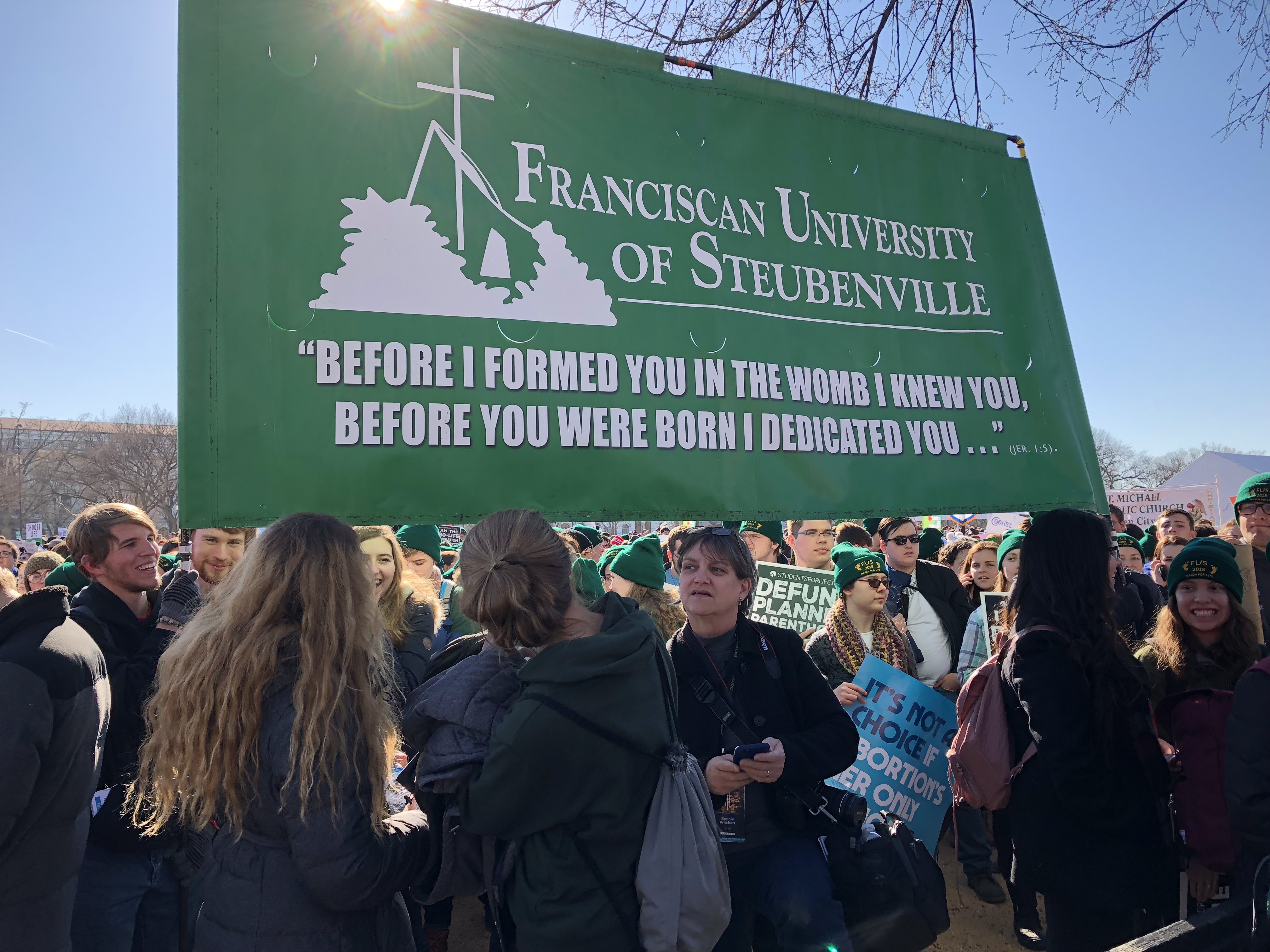 The 45th annual March for Life was one filled with great support and spirit for the nearly 500 students and faculty who traveled to Washington, D.C. to support the movement to end abortion.

The 24-hour trip began with an amazing holy hour in Christ the King Chapel, lead by the Rev. Nathan Malavolti, TOR, before the students loaded eight charter buses to head for Washington, D.C. Malavolti gave a reflection in which he stressed the truth that all the faithful are “called to be warriors.”

Malavolti reminded the students about to make the trip that they were sinners and in need of forgiveness, tying into the theme for this year’s March, which was “Love Saves Lives,” by explaining how the pro-life argument is no longer about logic but it is about changing hearts.

Malavolti finished with words of encouragement, exclaiming, “We are warriors. Someday this sick chapter in our nation’s history, that of abortion and this culture of death will be just a footnote in our past.”

He explained how everyone must become aware of the intrinsic evil that is abortion and how the students were going to march in order to “remind our legislators of their obligation to defend the right to life.”

Leaving at around midnight, the students and friars arrived at the largest church in America, the Shrine of the Immaculate Conception, at 6 a.m. There was plenty of time before the 7:30 a.m. Mass to explore the basilica, and several groups even found their way to the crypt for morning prayer. There was such a large crowd of students, families and other marchers gathered for mass that people were standing all along the walls and even in the foyer.

Bishop Edward James Burns of Dallas, Texas, celebrated the mass along with the Rev. Sean Sheridan, TOR. The Rev. Nathan Malavolti, TOR, the Rev. Jonathan McElhone, TOR, and the Rev. Shibin Kurian were among the numerous priests who had come with their schools and parishes for the march and helped distribute communion.

After the Mass, the students and faculty from Franciscan gathered on the basilica steps and took a group photo, then, despite a lack of sleep, headed downtown full of energy to march on Washington.

According to sophomore Dominque Cognetti, coordinator for this year’s march, there were about 450 students and religious on the buses this year, and that was not including those students who drove themselves down. “This is the biggest the March has been in a long time. I felt such a renewed sense of hope this year that the Lord is going to provide good things this next year. We are the pro-life generation, and pray by pray we are seeing a change!” exclaimed Cognetti.

One of Cognetti’s favorite parts this year, she said, was when the president spoke during the pre-March rally. “He mentioned the bill that will prevent after the abortion takes place, if the baby is alive, you cannot kill it.”

Freshman Allison Morisey agreed, exclaiming, “Donald Trump is a blessing to this country. Our president stands with us and for babies. Never in my life have I had a president who represented me.” Trump was in fact the first president to ever speak at the March for Life.

Aside from the president, the rally also featured representatives from the Eastern Orthodox Church, Catholic speaker Sister Bethany Madonna of the Sisters of Life, Pamela Tebow, mother of football star Tim Tebow, pro-life members of the House of Representatives, such as Paul Ryan, and more.

Cognetti shared how she loved the presence Franciscan brings to the March, and how “this year I felt so blessed to be able to walk humbly with my fellow students and friars. I truly felt God’s presence as the sun was shining and we were marching for something we believed in.”

Freshman Aidan Howard said, “As the opening prayer stated, we do not march to promote our selves or position or to represent a particular ideology. Rather we march because it is absolutely necessary that the truth of the sanctity of life be understood at every level of society. Part of why the march is so powerful is because it shows that we are succeeding, and it is a blessing to be a part of it.”

Morisey pointed out that there was a “lack of resistance” this year: only at one spot during the march were protestors seen. She continued, “This makes me think we are really making a difference , which is awesome!”

The 2018 March for Life was without a doubt one to remember. The great mass of people, approximately 700,000 in all, has shown the nation what it is like to be a warrior for the voiceless unborn.

Freshman Rosemary Stefanick, who worked the event as a photographer, said she “had the blessing to experience it in a way I had never before seen. I was witness to the passion and care of every soul there, capturing their love for those (babies) they have never met and never will. Through love, we have found the solution.” Stefanick continued with a quote from Pope Saint John Paul II: “Do not forget that true love has no conditions. It does not calculate or complain, but simply loves.”

As Burns said in his homily before the march, “We cannot grow complacent, and we cannot be silent when it comes to standing for life.”