Masterminds behind the scenes of a Fieldhouse Mass 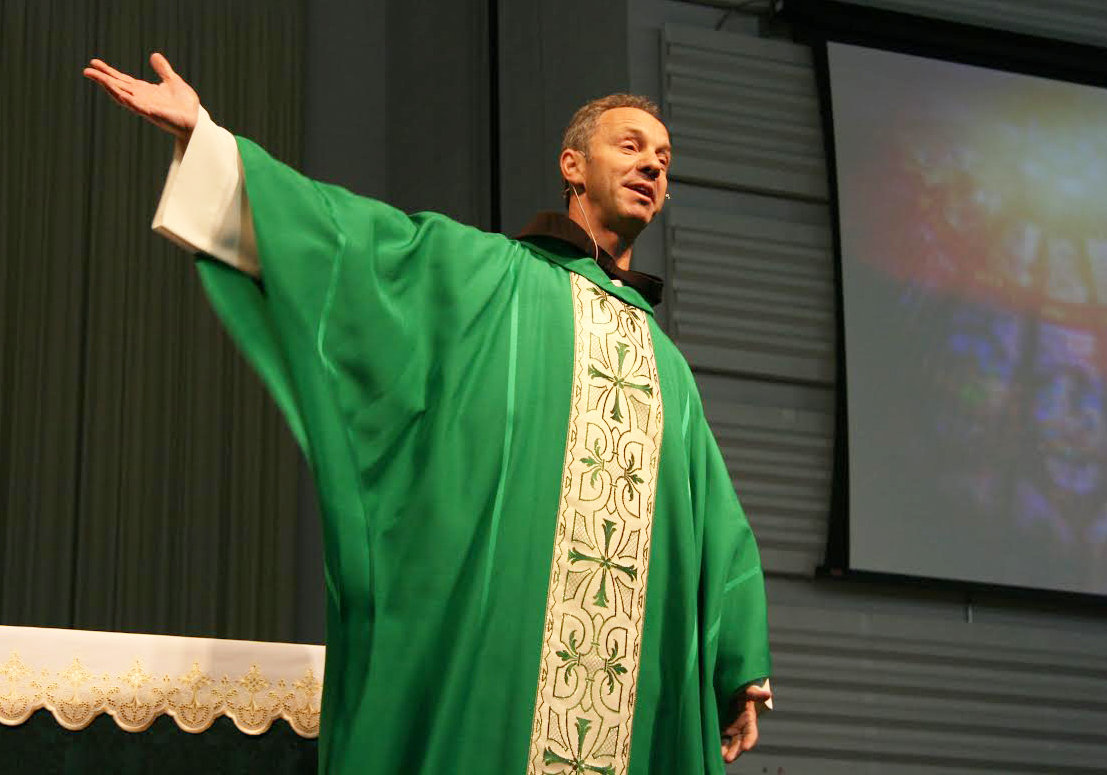 You walk into the Fieldhouse and the stage is set with beautiful flowers, an altar in the center, flowers everywhere, chairs neatly placed in rows. Suddenly the gym is now a church.

Does this happen in the blink of an eye? No, this comes from many hours of hard work, many different departments involved, and many individuals that make up the staff that is able to transform the Finnegan Fieldhouse into a place to celebrate Mass.

Dave Fatula, the events coordinator, said that the altering of the Fieldhouse into a place of worship is no easy task.

“Trying to make a gym into a church, it’s very difficult,” said Fatula. “We can make the eyesight look good, but if you look up, you’ll see it’s a gym, but we don’t have a place to put everyone, (so) we have to use a gym.”

The setting up for a Fieldhouse Mass is a collaborative effort between 20 students working on events team, and about 16 working on Liturgy Committee for Christ the King Chapel.

“We take our orders from the Chapel, and they tell us what we have to do,” said Fatula. “There is a ton of work that goes into it.”

“A lot of the work is put in before Mass begins, so that our eyes can be on the participants,” said Downs. “If they need anything, then we are always available.”

Downs said some of the staff jobs include bringing out the mats to cover the gym floor, placing chairs, putting up the pipe and drape around the Fieldhouse, and setting up the stage with the altar and chairs.

Fatula said the stage is set up by a company called Runaway Sound, which does a lot of the work for the summer conferences set up in the Fieldhouse as well.

Fatula said there are three different types of Fieldhouse Masses: Household Life Masses; bigger Masses, such as Homecoming weekend and opening of the semester Mass; and the largest, Holy Week and Baccalaureate Masses.

Downs said depending on the size of the Mass, Events will place a different number of chairs.

“It’s kind of like putting together a puzzle,” said Downs.

Ginny Bender, a senior theology and catechetics major and student head of Liturgy Committee, said Liturgy Committee’s job is to bring everything necessary for a Mass over from the Chapel an hour and a half before Mass, dress the altar and transform the stage into a place to celebrate Mass, and to make sure the Mass runs smoothly.

“We’re the kicking feet of the swan,” said Bender.

Bender says most of her prep work happens at the beginning of the semester, when she receives a list of Fieldhouse Masses for the semester. When there is an upcoming Fieldhouse Mass, she contacts the Fieldhouse to reserve racquetball courts to serve as vesting rooms for the priests before Mass, and contacts Dave Fatula if there is anything necessary to tell him.

While it is still a gym and not a beautiful church, Bender said she appreciates the enthusiasm of those present for Mass.

“I really love to stand in the crow’s nest, and see all of campus praying together. You don’t normally get to see close to 1,000 people praying together, especially because of our 350-person chapel, so it just feels like I’m one with the body of the Church,” said Bender.

Melody Doudna, a junior education major and co-head of sacristans, said her job as sacristan is to get everything prepped about 2-3 hours before Mass in the Fieldhouse. She, along with her co-head, junior theology and catechetics major Jacob Konkolics, load all necessary vestments, books, and sacred vessels onto carts and the rest of Liturgy Committee helps bring everything over to the Fieldhouse.

“It’s really important to have that teamwork.” said Doudna. “I think that’s why we’re all here on Liturgy Committee, to help everything run smoothly, and to give glory to God.”

Doudna said one of her favorite aspects is the behind the scenes work that goes unnoticed by most of the students.

“Even if nobody else notices something, you know that it’s done right for the King,” said Doudna.

Bella Asci, a junior theology and catechetics major and co-lead of logistics with James Downs, said she too loves the fact that everything Events does is very hidden from view.

“I think it’s good because it keeps us humble and keeps us focused on doing a service for our brothers and sisters on campus (and) for the Lord, especially when it involves the Liturgy,” said Asci.

“It’s difficult for me to pray the Mass because I’m working,” said Lisella, “because I’ve got to think about all these details, and behind the scene stuff, but I’m doing it so that way everyone else can have a good experience, hear the music, and pray, and understand everything that’s being said.”

Lisella has been working Fieldhouse Masses since September of 2013, and has been employed by Aardvark Productions in downtown Steubenville, which does a lot of the work with the sound equipment for the band for the Fieldhouse Mass.

Lisella said although he doesn’t have a title, he calls himself the “audio-visual coordinator,” and he is in charge, along with six other staff members, of setting up the equipment for the band, doing sound check before Mass, mixing the bands, and making sure the priest has his microphone.

“If you don’t hear the beginning of a priest’s sentence, that’s me forgetting to turn on his mic,” said Lisella.

Lisella said he usually works close to six hours for one Fieldhouse Mass. Giving the example of a 4:45 p.m. Mass, Lisella usually begins preparing around 11a.m. that day, bringing in sound equipment, and setting up for the Mass.

Like Bender, Lisella said he loves the view up in the crow’s nest during a Fieldhouse Mass, and seeing the student body gathered together under one roof to celebrate the Eucharist.

“I think that’s why the university continues to do the Fieldhouse Masses,” said Lisella, “to gather everyone together in one place.”

Although the atmosphere in the Fieldhouse is different than it would be in a church, Fatula said it is important to remember that Mass is the same wherever it is celebrated.

“In a barnyard or in a cathedral somewhere, it’s still the same Mass,” said Fatula.