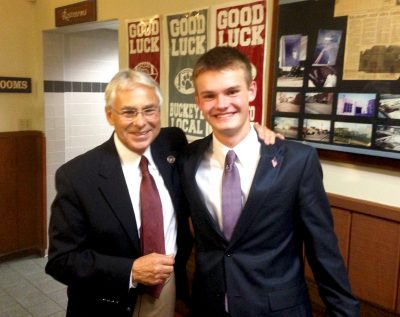 Steubenville’s new mayor wants Franciscan University students to know that Steubenville is a community they are welcome in.

Mayor Jerry Barilla took office on Jan. 1 and hopes that throughout his term, the students and administration of Franciscan University will continue to contribute to the city of Steubenville through economic stimulation and community integration.

“I think the world of Franciscan. If we didn’t have Franciscan here, I don’t know what it would be like without them here,” said Barilla. “They are such a huge impact not only from the faith-based environment, but also from an economic standpoint.”

Barilla said that running for mayor was never something he sought out, but several people he respected approached him, urging him to give it a shot. He was still hesitant, but after seeing a comic strip depicting Jesus calling the apostles to follow him, Barilla thought that maybe he was being called to step outside his comfort zone.

“I looked at the comic, and I thought to myself that Peter and his brother could have said no to Jesus and said, ‘No thanks, we’re comfortable where we are, and we don’t want to go anywhere with you,’ but they got out of the boat and went with him,” said Barilla.

“As I looked at that, that’s what really motivated me to ‘get out of the boat’ because I was comfortable with where I was at and I thought, ‘Maybe it’s time for me to step out into a new adventure and try this mayor thing.’”

As mayor, Barilla wants to see Steubenville grow as a safer and more business-friendly community that achieves a sort of oneness or togetherness. As a major part of this, Barilla wants to revitalize the city’s downtown area, which has been in decline for some time and is just now making strides to grow again.

Barilla cited Nelson’s recent development of popcorn and coffee shops that he hopes will attract students to spent time in the downtown area. In addition, the BookMarx Bookstore has been a steady place of economic stimulation by university students.

Last year’s Steubenville Stimulus Project, put forth by then-senior Tommy Valentine, gave Barilla hope in the urge of students to help Steubenville grow financially. However, he would love for student outreach to be more than monetary.

An example Barilla gave was for university students to engage in community service projects, such as helping prepare recreational parks and facilities for the summer. He even suggested the possibility of students staying for the summer to help put on programs such as arts and crafts at the parks for the youth.

The reason for this stimulus is the lack of healthy activities available for children and teens in the downtown Steubenville area.

“There’s a huge amount of kids from the south end all the way to the north end that live downtown, and they have no water activity and very little supervision for games and involvement,” said Barilla. “They’re just kind of left there, and it’s sad. I mean, that’s how you deter things that happen in the negative realm, if you have activities for people. The more activity, the less fear and problems arise, but without activity, things deteriorate pretty rapidly, especially during the summer.”

Another way that Barilla believes the university can help the city is by setting up satellite classrooms in the downtown area, an idea he first mentioned to the university while accepting the 2014 Founders’ Award.

He believes that having these satellite classrooms would help better connect the university with the city. While the idea never came to fruition, Barilla still hopes that it will happen one day soon and points to other college towns that have done the same.

“In Wheeling and at Kent State University and in other areas, the universities are starting to get more involved with their towns and making it more of one city instead of a division between the two,” said Barilla. “My goal is to see students downtown on a regular basis having fun, enjoying the entertainment, coming down here so that we can become more viable.”

Regardless of whether or not if that ever happens, Barilla remains proud of the role that the university plays in the city and is confident that it can help Steubenville be “a place where those of us that live in light can be the light to those that live in darkness.”

2018-01-30
Previous Post: New minor emphasizes practical application of music
Next Post: Late-game deficit too much for Barons in loss