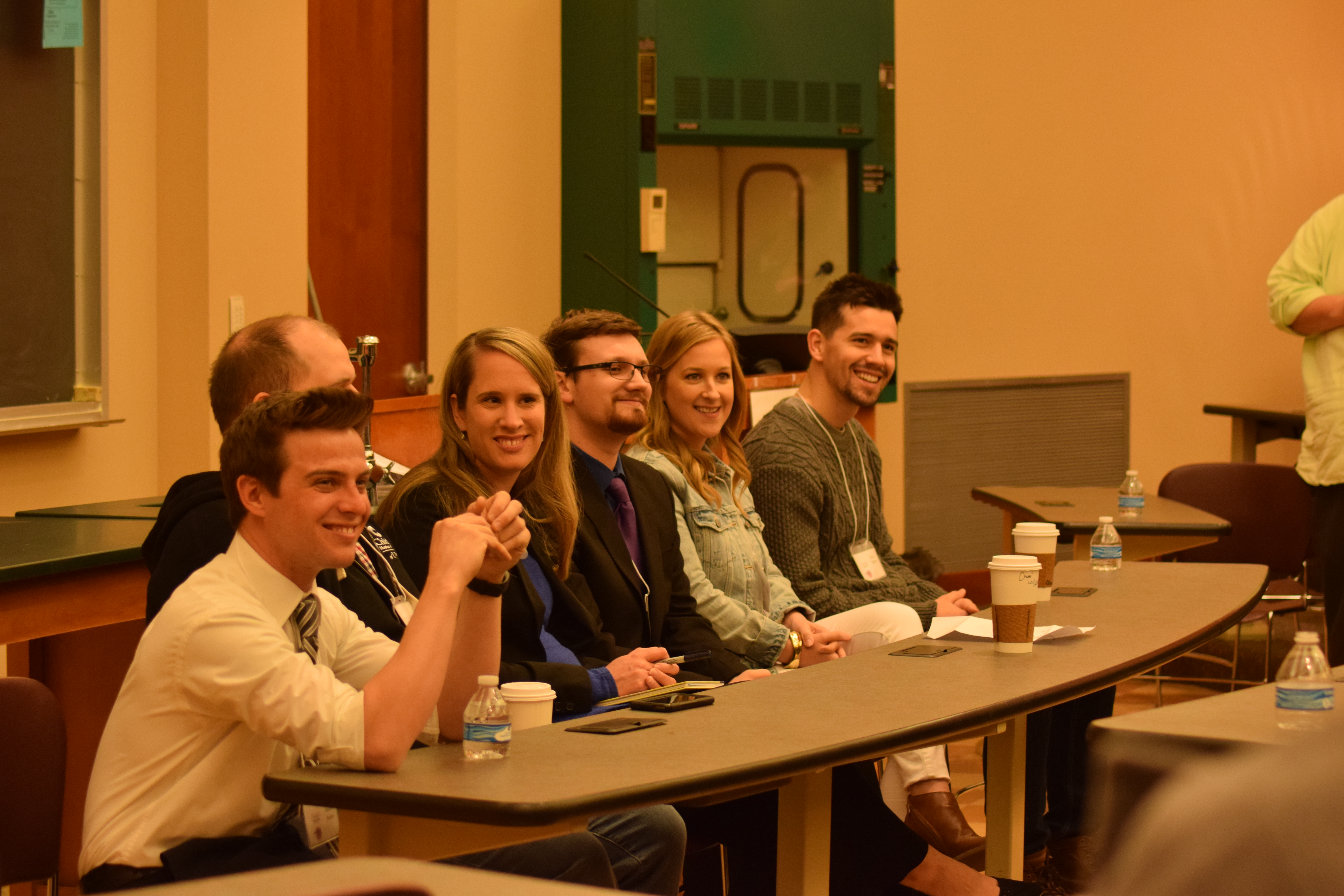 The weekend of April 6 and 7 saw the edification of many future as well as current media makers through the Media and Faith Conference that took place on Franciscan University’s campus in SS. Cosmas and Damian Hall.

Hosted by the Communications Department and the Troubadour, the conference’s theme was “Communicating Truth,” which it did by hosting 20 guest speakers, including university professors, alumni of the university and nationally known journalists, for talks and panel discussions. The Pugliese Auditorium was full for many such lectures, which all ended in question and answer sessions.

The media and faith conference opened with a talk by Barbara Nicolosi Harrington, who holds a doctorate in creative writing. Harrington spoke to a packed audience on the necessity of high-quality movies and not putting them under the genre of “Christian movies.”

Harrington based her talk on Pope St. John Paul II’s “Letter to the Artist” and focused on the relationship between the Church and the arts.

Harrington said the church was once known as “patron of the arts,” but no one would know that now.

The Church needs to instruct the artist in what a human person is, said Harrington, and the artist’s ultimate destiny, or telos.

The demands of art, said Harrington, include the “native ability to bring forth the beautiful.” It also calls for rigorous training, isolation and practice, along with an idea worth sharing.

Harrington said artists have a call to bring forth the beautiful in the best quality, not in the low quality that might arise in some well-intended Christian movies.

Harrington said for a movie to be wholesome and good, it does not have to have God written blatantly across it.

“The power of art is in the subtext, not what you say to the audience,” said Harrington.

Harrington said a well-done movie will have your faith speak through its excellence, since Christianity should not be a “sub-culture” but something we live in our everyday life and work.

Harrington said this means taking chances in creating good-quality movies since “safety is not a Christian virtue.”

The second talk of the evening was Brian Robau, a student Academy Award winning director and an alumnus from the university who spoke on the difference of message and story.

Robau said a story is encountering a person, a life, rather than promoting a message. Stories are what make culture, not a forced message, he said.

Robau also echoed Harrington’s words that a good story does not need God’s name truly present to make it realistic and faith-filled. Robau said much of that comes about from just being authentic.

Robau said the two questions a filmmaker needs to ask is: “Who am I?” and “What do I have to say?”

It’s through answering these two questions, said Robau, the films are able to reflect the personality and authenticity of the creator.

Robau said it is important to approach this “not as a philosopher,” but as an encounter between the film and the audience, and the best way to do that is just being yourself.

Robau focused on highlighting the importance of the students’ own take on life when making films and stories. “All you have to tell is yourself, your own story that only you can make,” he said, continuing with the idea that (it’s) not just your experience, but your point of view.”

Friday night concluded with the Media Research Symposium, where communications students showcased some of their recent projects.

After a brief devotion of the Divine Mercy Chaplet organized by student coordinator Amanda Kenney, conference attendees spent Saturday morning in sessions of their choice.

Options included “Public Relations: Authenticity and Charity in Communications,” and “Digital Broadcasting: What Makes it Tick?” for the first session.

For the second session, attendees chose between “How Catholics Can Communicate Truth, Goodness and Beauty More Effectively in Our Modern Media” and “10 Surefire Tips for Journalistic Success.”

The 10 tips included advice such as “be versatile” from Starrs, who said: “You have to be able to do it all.” Starrs also advised to “learn to speak and present yourself well,” “be curious” and “fight bias by the way you respond with respect.”

Starrs emphasized to future reporters to “try all the rides.”

Do things that scare you,” he said.

Scott’s biggest takeaway point was authenticity. “Remember to be that person in the secular world,” she said.

“Network within the organization. … Notice the need,” she said, and “have a heart for every headline,” giving examples of times where her attention to detail had potentially saved someone’s reputation.

The afternoon sessions opened with a panel discussion between Maria Mitchell, producer of Ascension Presents, Brian Robau, Barbara Nicolosi Harrington, Josh Madore, a manager of Internal Communications in Children’s Hospital of Pittsburgh of UPMC, Marianne Hughes, a communications consultant and ’07 graduate of the university, and Andrew Adams, chief videographer of WTOV 9 in Steubenville and a ’13 graduate of the university. Each individual contributed in discussing working in the secular media.

As several of these people had graduated from Franciscan, they shared what experience they had with leaving “the hill” to go out into the secular media field. Many said they had found more positivity in it than negativity.

Questions varied, but the one that struck up the most interest was how to still be a faithful Catholic and when to include your coworkers in that area of your life.

During this discussion, Harrington spoke up from the audience and said that she believed as Catholics, there is too big of an obsession over the minuscule details, such as when to pray before meals. Harrington said to be a true and faithful Catholic means to serve those around you, to be real with your coworkers, to “show up early to work and make the coffee,” rather than trying to evangelize.

The panel echoed this viewpoint, with Mitchell and Robau sharing that they had found some coworkers generally interested in the faith just because they see how real they are.

The conversation veered away from faith matters to practical matters, such as how to recognize your abilities and your talents.

The panel encouraged the audience that if someone was unsure of how to do something, just use his or her experience to take the next step and take it one at a time, with an almost “fake it ‘til you make it” attitude.

The afternoons sessions also included two separate talks, one entitled “Social Media: Integrity and Authenticity” And the other “What Makes a Story Screen Worthy?”

The panel for “What makes a story screen worthy?” included Robau, Harrington, John Walker, a professor in the Drama Department and Cris Taylor, an adjunct professor of the university who worked in the past as a casting director. The panel was monitored by David Schaefer, the chair of the Communication Arts Department.

Each panel spoke on something they thought was necessary in making a story screen worthy.

The last talk of the afternoon session was given by David Schaefer, who spoke on “Globalization, Truth and Media Literacy.”

Schaefer began his talk by pointing out real news and how to tell when it is authentic by checking multiple sources. Schaefer then moved into talking on the Hyperreal, drawing from the movie “Ready Player One” to show how Steven Spielberg used virtual reality as a content creator.

The conference reached its end in a dinner and keynote address from Paul McCusker, titled “Once Upon a Time: Reclaiming Truth in Story.”

McCusker, a prolific author of over 50 works, spoke on the importance of having standards and ideals by which to judge and write stories — a standard which has been mostly lost in today’s culture.

“If we desire to reclaim truth in story, we need to know what truth is,” he said. “See what it is and that you really believe before you put truth into a story.”