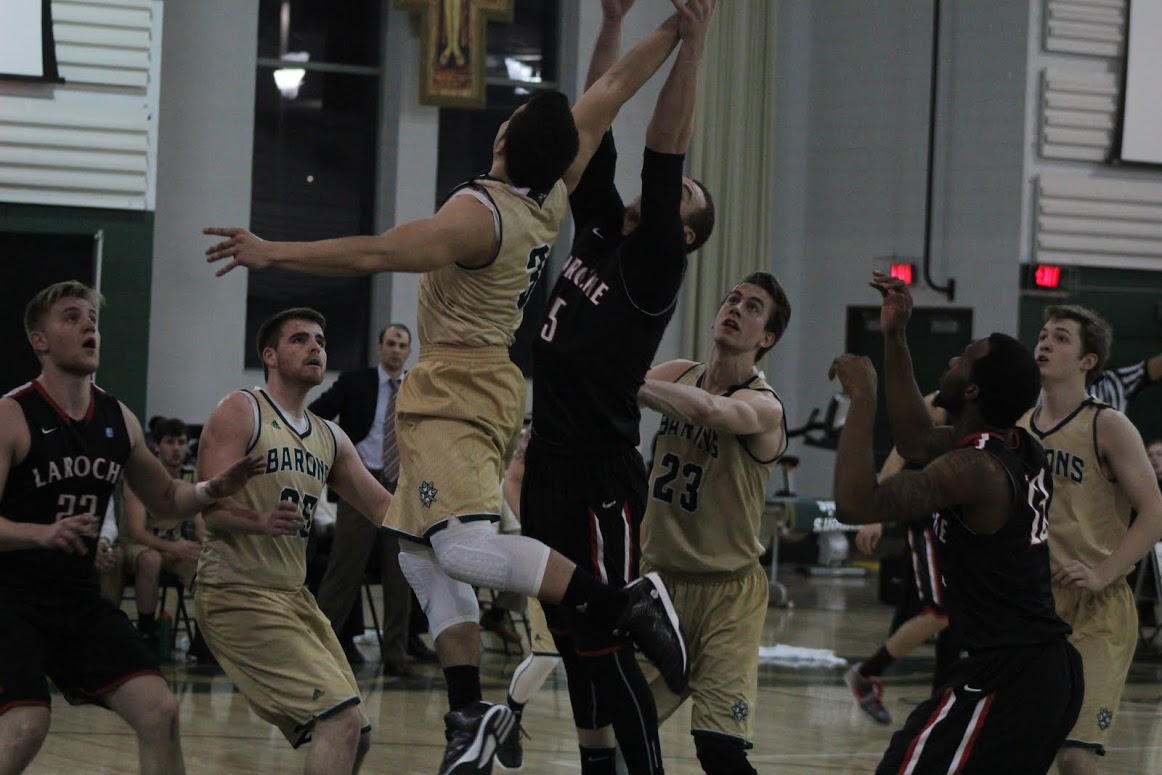 Right from the start of the game, the La Roche College Redhawks had an early lead. Franciscan played catch-up for most of the half and finished three points behind, 26-23 at halftime.

Quickly into the second half, a three-pointer from freshman Keoni Sablan and a jump shot from senior captain Moses Sullivan pulled the Barons ahead of the Redhawks.

From there, the Barons led for a majority of the second half until a series of free throws brought the Redhawks within two points with 7:34 remaining.

The score continued to waver and eventually was tied with 2:26 left on the clock. Then, in the span of a minute, sophomore point guard Jacob Divens got a tough floater to bounce in and sank four free throws to give Franciscan the lead. Freshman Richard Cross sealed the win, sinking two more foul shots with three seconds to play.

“It was exciting,” Head Coach John Lamanna said. “It was a good way to end the season at home, and I’d say our character showed through very well tonight.”

One big playmaker for the Barons was Sablan, whose baskets could not come at more crucial times in the game. The freshman guard finished the night as the team’s second leading scorer with 13 points.

Sablan was accompanied by Sullivan who ended his last home game with 5 rebounds and a team high of 19 points. Sullivan’s ability to drive and finish through contact at the rim also kept Franciscan alive during La Roche’s scoring runs.

“Moses really stepped up and had a great game,” Lamanna said. “He (was) just really efficient, made plays down the stretch and was very timely with his points as well.”

On the other end of the court, the Barons continued to improve defensively, especially in the final moments of the game when two back-to-back defensive stops kept the game from going into overtime.

While the team celebrates its sixth win and looks forward to its last game of the season, Lamanna said the Barons’ aim is to end the season better than they started and break last year’s program high with a seventh win.