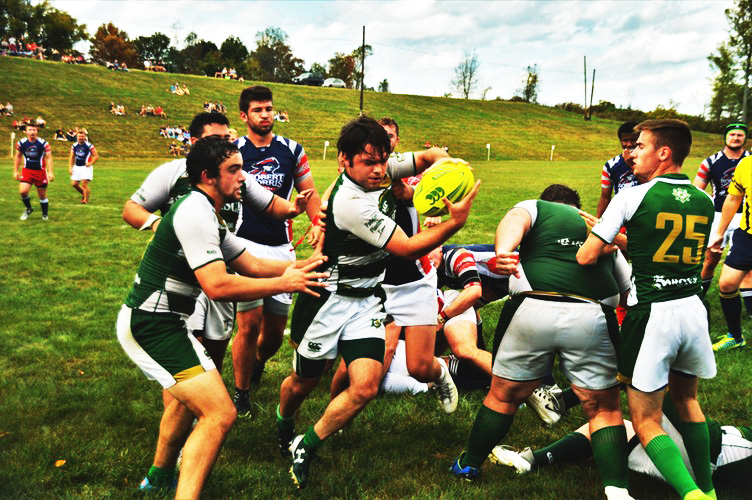 The Baron men’s rugby team, in the middle of the festivities of Homecoming weekend on campus, remained focused on its goal of continuing its season winning streak. This time, the opponent was the very talented Robert Morris Colonials, who have a history of playing well against the Ruggers, taking the last two matches the teams have dueled. However, the Ruggers were not looking to take another loss at the hands of the Colonials, especially on Homecoming Weekend, with so many fans in attendance.

The Barons demonstrated intensity right from the onset of the game in the early stages of the first half. They maintained steady, offensive pressure against the Colonials, pushing the ball into the offensive zone. Finally, they located a break in the Robert Morris defense, when sophomore forward David Prezzia scored the game’s first try, giving the Ruggers a 5-0 advantage at the 11 minute mark of the first half.

The Colonials wasted no time in responding, and at the 13:41 mark they converted their own try, leveling the score 5-5. About 10 minutes later, at the 24:24 mark, the Ruggers again responded with their own try, after junior Matthew Hostutler ran for a try to put the Ruggers back on top, with a 10-5 lead. The Colonials stole the momentum for the rest of the half, scoring the next two tries, both with conversions, giving themselves a 17-10 lead as the first half concluded.

For the first part of the second half, neither team dominated the game with a lot of back-and-forth play. The Ruggers eventually found a hole in the Robert Morris defense at the 10:58 mark, when junior lock Jacob Borden muscled his way through the Colonial defense and the Ruggers scored a try and conversion to tie the game at 17-17.

The Ruggers would add to their lead when another successfully converted try and another conversion, giving the Ruggers the lead at 24-17. At this point, the game looked sealed, but the Colonials of Robert Morris had other plans. With less than 8 minutes remaining, the Colonials scored a try but failed on the conversion, making the score 24-22 in favor of the Ruggers.

As the clock wound down, the Ruggers were put in a tough spot. “Every single RMU try was a direct result of a Franciscan mistake,” remarked head coach Dan Kramer after the game. “They put up 22 points on us today, but it could have been 0 if we had played cleaner rugby” he said.

Coach Kramer was referring to the defense which was roughed up on the day, and it showed in the waning minutes of the game. The Colonials had the ball deep in Rugger territory, continuously knocking on the Rugger goal line. However, the Rugger defense found strength, and with a valiant last stand prevented the Colonials from scoring. Franciscan sealed the win 24-22.

The Ruggers look to continue their undefeated season against Grove City on Oct, 14 at 1 p.m., on Memorial Field. With this game marking the last home game of the season, the Ruggers will be honoring their senior teammates.