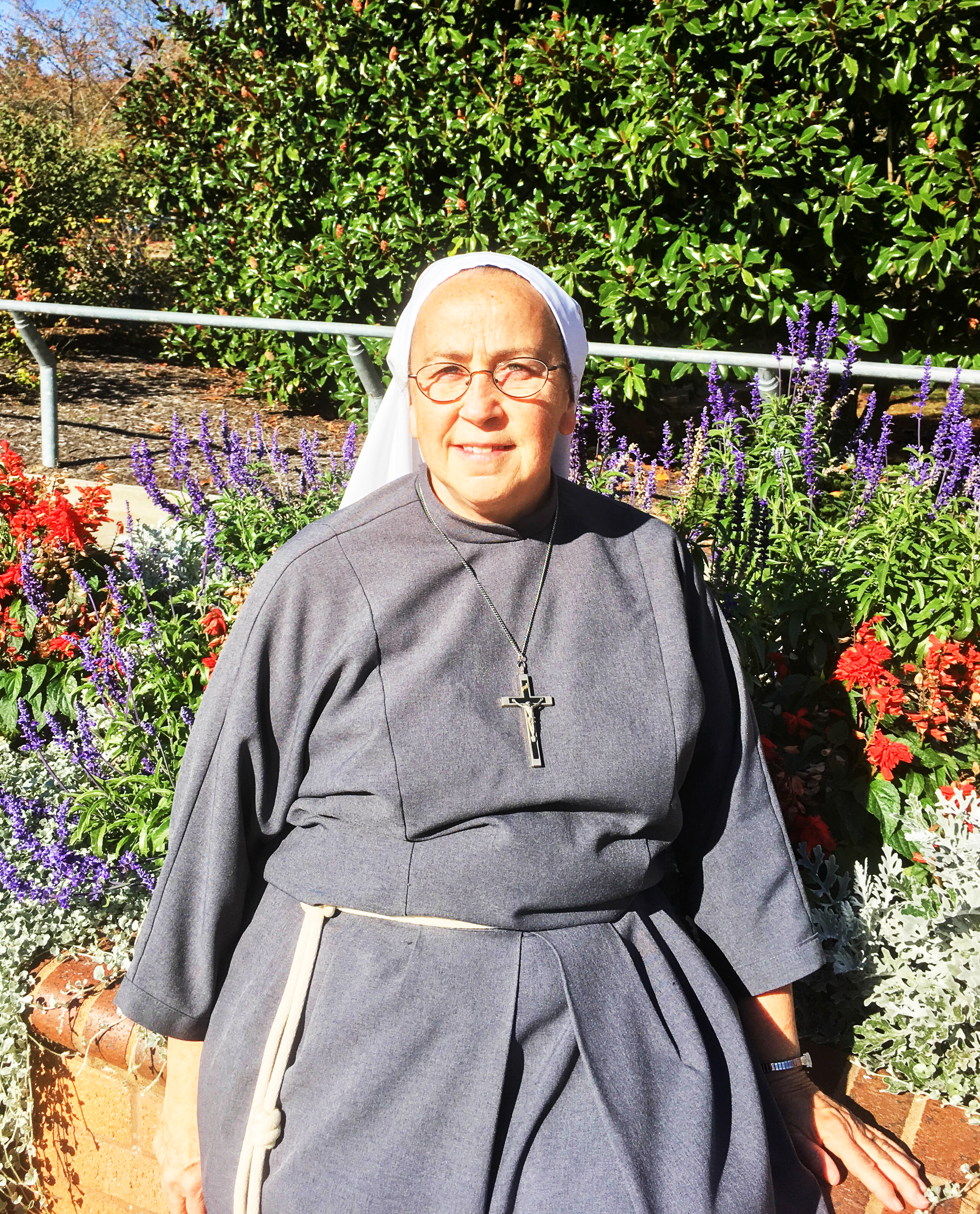 “I auditioned to become the Baltimore Oriole Bird, but God had other plans,” said one of the four finalists for this mascot position. “Obviously it wasn’t God’s fulfillment for me. It just didn’t fly.” Sports enthusiast, gymnastics teacher, skilled dancer, traveler: at first glance, who would suspect that these words describe the new, less-than-five-foot-tall sister on campus, Sister Maria Pio Wiggins, TOR.

Wiggins is one of the four Franciscan Sisters, Third Order Regular, of Penance of the Sorrowful Mother – or TOR Sisters, for short – on main campus this year. After spending the past two years in Gaming, Austria, she has returned to Ohio to be the head of Franciscan’s Women’s Ministry.

In Gaming, Wiggins served as a spiritual director and led women’s formation. While there, she began Wednesday night women’s sessions called Women Seeking God. “We were able to bring together the women of the Kartause, young and faculty staff … and we just spoke about different topics that were important for women,” said Wiggins. “They learned a lot about themselves and about God in the midst of all of it.”

Wiggins was also able to travel more than staff usually do while in Gaming. “The university had these extended excursions because of the terrorism that had happened in that area when we first got there” So, for the parents’ comfort and the students’ safety, the university bused students to locations for weekend trips. Wiggins went as a chaperone on many of these trips.

Out of all of her traveling, Wiggins said that her favorite trips, aside from Poland, were the mission trips to Slovakia, where she went in three consecutive semesters. She enjoyed “just being able to go to the same place, nurture the same people and work with this dynamic priest who was like the JP II of Slovakia.”

Before going to Austria, Wiggins had been assigned to the Mother House and the mission house. Her assignment back in 2008-2010 was on the Franciscan University campus. “I’m re-new here,” she said.

Wiggins joined the TOR Sisters in 2000. “I like to say that teenagers drove me right into the convent,” she said. After growing up as the youngest of nine children in a faithful Catholic family in South Carolina, Wiggins moved to the Baltimore area and lived in “a very powerful Catholic community of young adults who were all working for a LifeTeen ministry, and everything was focused on the Eucharist,” she said.” Living in that setting, I was able to see and hear the Lord’s call in my heart.”

After not having much luck finding “Mr. Right” while serving there, Wiggins asked the Lord in a holy hour to “pick the next guy. And He just humbly said to me, ‘Well, would you consider me? What do you think about me?’, and I wasn’t sure what He was saying when he first said that, but it was this whole sense, this whole invitation to be more fully given to Him.”

As head of Women’s Ministry, Wiggins will use her experience from her time in Austria to make improvements. “As I was doing the ministry in Austria, a lot of the students said to me that sometimes they didn’t know when a lot of the events were happening because it wasn’t consistent; they weren’t as regular as what they could do in Austria, so they asked me to start something new, like having it every week, as well as the big events,” said Wiggins.

Already she has implemented the weekly Wednesday Women at the Well events, and has hosted other fun events, like the recent Corn Maze Craze. The aim of the changes in Women’s Ministry is to do “a variety of things that women would like to do, whether it’s talks or whether it’s … some type of adventure. We’re just trying to meet the needs of the women so they have a few outlets here on campus,” said Wiggins.

Wiggins is honored to be in this position where she can walk with the youth of this campus through life’s struggles and decisions that they encounter at this age. “It’s important to me because when I was this age I had a lot of things that happened to me that were very challenging … I just feel very humbled and blessed that God would put me in this position and that young people would be receptive to somebody that could possibly be the age of their mother,” said Wiggins. “I find that this age level of young adults just sparks my heart … and so I feel very privileged that the Holy Spirit has given me the grace to be able to connect with young women and men at the same time at this critical point in their lives.”