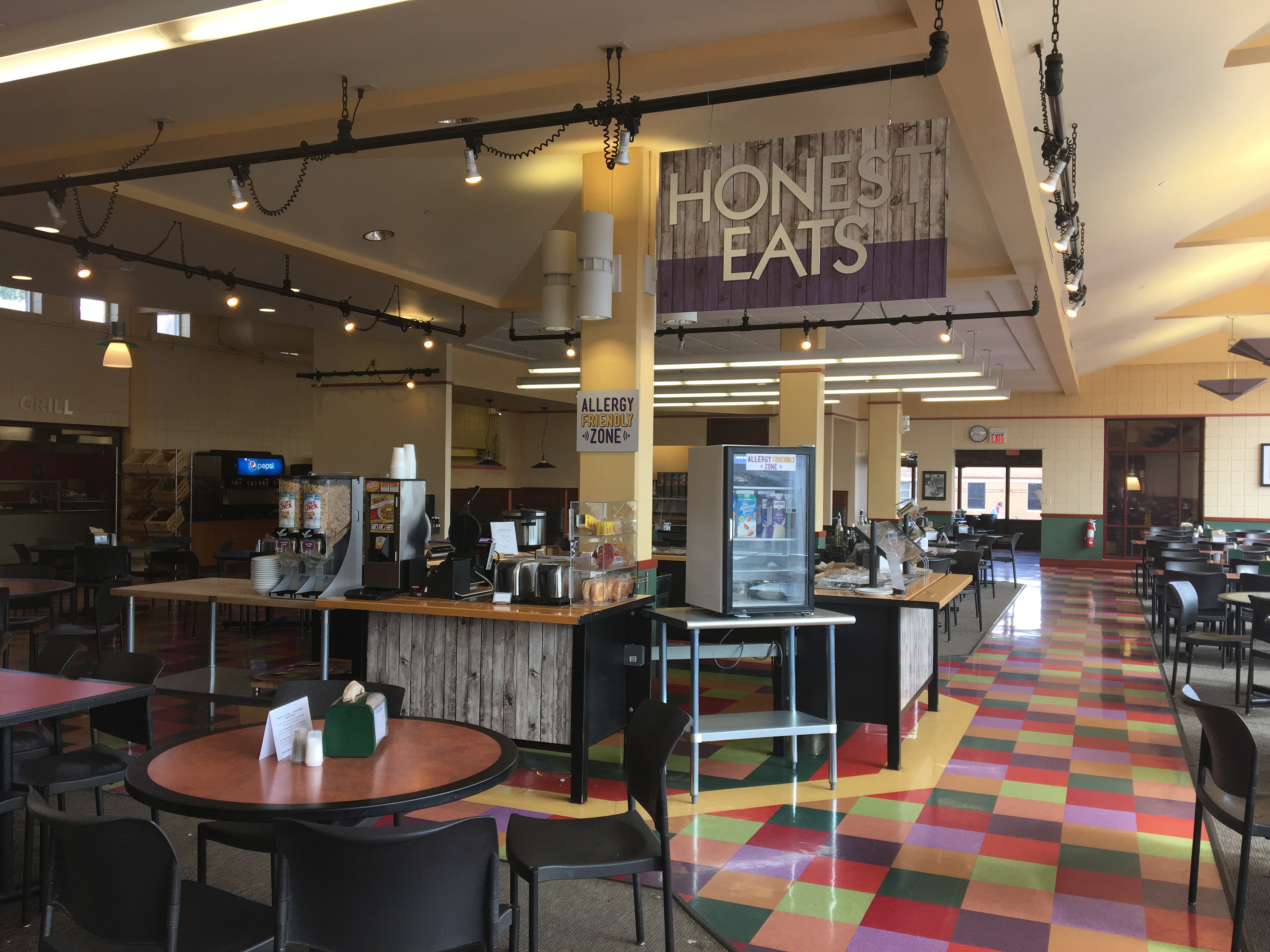 Franciscan University students returned from Spring Break to a few exciting new updates to the Antonian Hall. Honest Eats, the allergen-friendly area, has expanded and is now located at the center of upstairs level of Antonian Hall. Additionally, omelets and waffles are now available at a station all through both breakfast and lunch, and in the evening, that station is converted into a made-to-order pasta bar.

Parkhurst General Manager Lee Dortmund is passionate about keeping things changing. And the changes he makes are intentional and well executed.

“We want the food to be the hero,” Dortmund explained, pointing out the streamlined silver lettering above the Grill that provides a clean, non-distracting look. Similarly, the wooden blocks and glass jars at the ice cream station create a fun visual appeal.

Pointing out the cast iron pans at the Grill, Dortmund added, “It’s kind of like eating at home. If your mom cooks dinner for the family, it’s served in a big pot or a big pan. It’s a family style kind of thing.”

One of the most important things to Dortmund is the freshness and wholesomeness of the food. French fries are cut one potato at a time in a potato cutter and soups are made with homemade stock. Baby carrots are never served because they are processed; instead whole carrots are sliced by hand to be served at the salad bar.

Dortmund said, “One of my favorite things is to not advertise something we’re doing, and you guys come in for lunch, and you’re like, ‘Whoa, What’s that?’ That’s cool to me. It’s a surprise.”

Menus for each week are created primarily by Executive Chef Ryan Gregorius. Shannon Babela, who serves the meals at Honest Eats, creates her own menus, occasionally taking input from Dortmund or Gregorius. “She comes up with a lot of ideas herself,” said Dortmund. “She’s cooked with the allergy-friendly foods forever. She’s very good at it. She’s very safe.”

On the topic of upcoming changes, Dortmund had exciting news. “More than likely in the fall, we’ll start hand-making pasta,” he said. “We did it downstairs a couple weeks ago and it was crazy. All the students loved it.” His goal is to get the student body engaged as much as possible, and he hopes to get students involved in the pasta-making process when that idea comes to life in the coming semester.

Chef Ryan pointed out the common aversion to cafeteria food purely because it comes from the caf.

“No matter how well you treat ingredients, no matter how much variety you give, there’s always the stereotype that it’s caf food. Even if we have different stuff every day, you’re still eating in the same building,” he said.

He explained that in order to combat this idea, “We really strive to keep things as interesting as possible.”

After running through some of the recent changes at the caf, Dortmund joked, “As far as any other changes in Antonian, that’s pretty much it. For now. Until I get bored again.”

2017-03-30
Previous Post: Message of Mercy spread to Franciscan University in multimedia play
Next Post: Austria Adventures: Living in fear is not what God wants