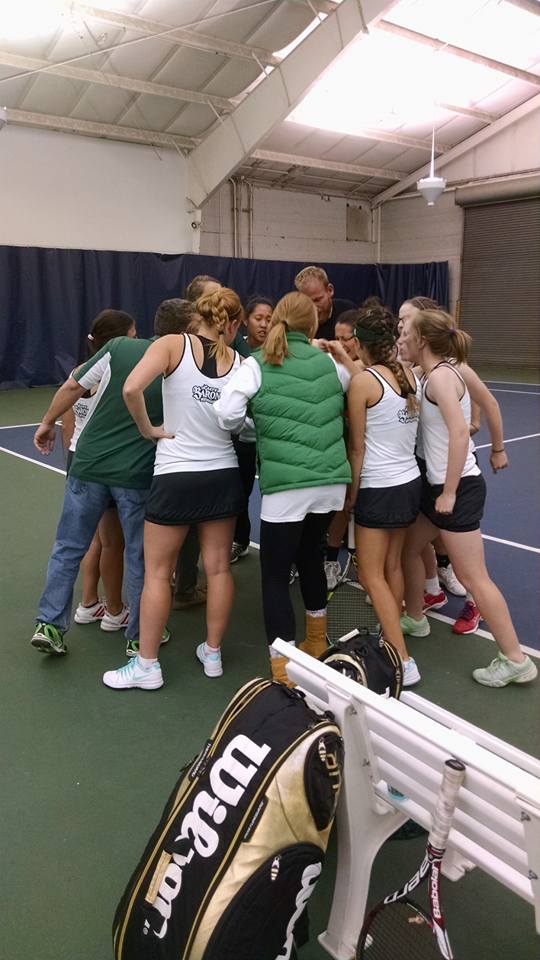 With three three-set matches in progress that could have changed the momentum of the match, Franciscan University women’s tennis lost 5-1 in the Allegheny Mountain Collegiate Conference semifinals to Penn- St. Behrend.

After beating Medaille College 5-0 in the first round, the no. 3 seeded Lady Barons met up with no. 2 Behrend with the Lady Lions receiving a bye straight into the semifinals. The Lady Lions won 7-2 in the regular season match-up but Franciscan was determined to change the outcome and move to the conference finals.

However, the Lady Barons went into singles play down 3-0 as doubles continued their season-long struggle.

“It seems like it’s been the tone of the whole year – doubles, doubles, doubles,” said Head Coach Jeremy Ellis. “One point in doubles would have significantly changed things. At least we would have played to the finish. We had three three-set matches left; it could have gone either way. We just didn’t optimize on our doubles opportunity.”

No. 1 doubles of junior Claire Haddad and freshman Maria Binette struggled right from the beginning, down 7-2 with Behrend about to cruise to an easy win. However, the pair were able to rattle off three straight games before the Lady Lions closed out the 8-5 match for their first point.

Behrend won its second point of the evening on court no. 3, beating the sophomore duo of Maggie Vander Woude and Anna O’Connor, 8-5.

Senior Renata Crespo and freshman Julia Razook were the last ones remaining on the court. The two started out dominant in their match but allowed the Lady Lions to climb back, forcing a tiebreaker to decide the match, which Behrend won 7-1.

“It’s that moment where you play really well because you really aren’t supposed to win but then you start winning and you get nervous,” Ellis said about the no. 2 doubles match. “They got tight and so they let them back in it. The no. 3 girl from Behrend has a big first serve and she gets them in, makes it tough to return. We just didn’t serve as well towards the end of that set and we couldn’t get it together in the tiebreak. That was a big hit there.”

Ellis added that having at least one point from doubles would have helped to boost the teams play and confidence because “having to win five of the six singles makes it physically and mentally tough.”

Franciscan found themselves down 4-0 rather quickly after the start of singles play when Crespo lost her no. 2 singles match 6-1, 6-0. The rest of the team felt the pressure, as each girl would have needed to win her match in order to send the Lady Barons to the finals.

Haddad was the next person to finish. She gave Franciscan its lone point in the match with an exciting 6-2, 6-2 win at no. 4 that was closed out with an extremely long game, which went to deuce multiple times.

“She deserves it,” Ellis said about Haddad’s win. “She’s been a great co-captain so her getting that point was huge.”

After Haddad was finished, three of the final four matches were heading to a third set, giving Franciscan the best chance to make a comeback. Vander Woude’s match at no. 5 singles, however, was the lone match that did not go into a third set.

The sophomore held a set point with a 5-1 lead in the second set to force a third set but her opponent battled back to win the set 7-5 as well as the match.

“All across the board, that’s when the team aspect of tennis really hits because now it’s up to your individual court,” Ellis said. “You feel the weight of being down 0-4. Maggie felt the pressure, but, even though she is a sophomore, this is her first year playing for Franciscan. She’s had a great season.”

The Lady Barons finished with a 10-4 record, 6-2 in the AMCC regular season in Ellis’ first season as the head coach of the women’s program. Only losing one senior to graduation, Franciscan will return with a strong lineup to seek its second conference title.

”I can’t wait for next season,” Ellis said. “It’s been a great first year coaching the girls and I’m excited to continue.”