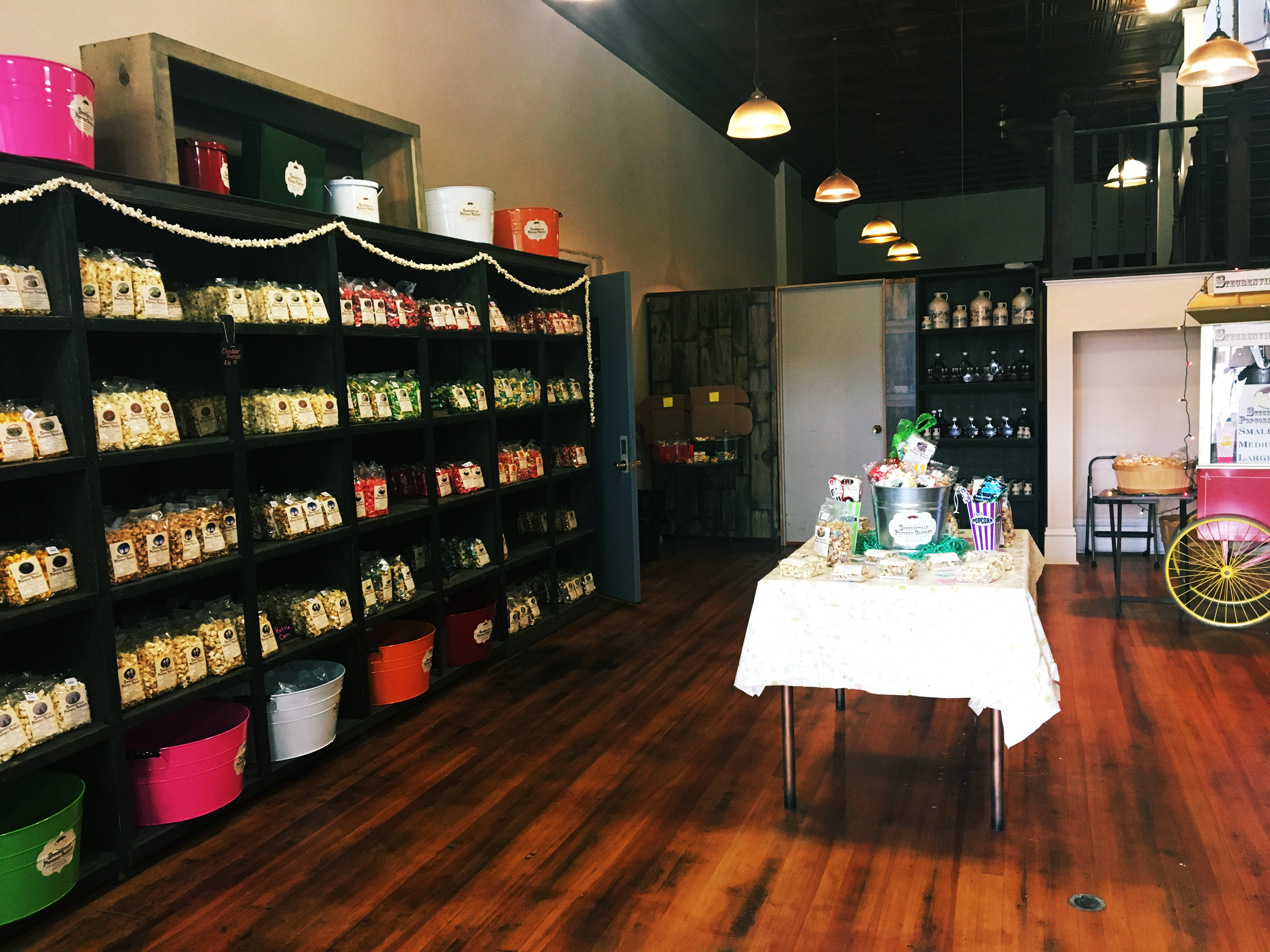 In Franciscan University’s small bookstore, there is a new addition—a shelf, lined with bags of brightly colored popcorn, that sits near the cash register.

The popcorn is made and sold by a small business hoping to make a big impact: the Steubenville Popcorn Company.

The company, which falls under the umbrella of Nelson Enterprises and the ownership of Mark Nelson, makes popcorn that is found in various places in Steubenville, including Franciscan’s bookstore and the Statehouse.

The Steubenville Popcorn Company is just one small business that is part of a bigger cause: to revitalize Steubenville and bring it back to its former glory.

The Steubenville Popcorn Company operates as a cottage industry, under the management of Nelson’s daughter, Therese, but it will soon operate out of a brick and mortar location. This means all of the popcorn is currently made in Nelson’s home, and the magic happens in her kitchen, home to a 5-gallon popcorn maker, a 5-gallon caramelizer and a 10-gallon caramelizer.

As a cottage industry, Nelson said the company is limited to in-state sales, but this will change once the popcorn can be made at its new location.

The company is less than a year old; the popcorn was first sold in May 2016 for a concert at Fort Steuben. Nelson said originally there were only five flavors, but more have been added.

In addition to contributing to the economy of Steubenville as a small business, the Steubenville Popcorn Company aims to aid the history and community of the town.

“Our labels are pretty much what makes our popcorn unique,” Nelson said. “Each type has an image and title relating to some aspect of Steubenville or its history, and the back label has information that corresponds with that.”

Nelson added: “If you don’t know anything about an area, there is little reason to love it. Many visitors and locals alike don’t know the first thing about the rich history of this area or about the resources it has to offer. Our goal is to educate with our packaging, because once you come to know and understand a thing, it’s hard not to start to love that thing.”

Nelson said some of the popcorn names determine the flavor, such as the “Steubenville Brew,” named after the old brewing company; its flavor is cheddar pretzel ale.

Right now the biggest business is through fundraising, and the popcorn can be customized to match school colors, she said.

Nelson said the Statehouse just started buying popcorn. The flavors are relabeled to be more geared to Ohio as a whole, such as one flavor called the “County Combo.”

Looking forward, Nelson hopes to create a religious popcorn line with the same flavors but different labels. She said the cheddar pretzel ale would be relabeled “St. Brigid’s Brew”; other flavors would include a kettle corn called “Pilgrimage Snacks” and caramel for “Mt. Carmel.”

But it is not the only duty on her plate. In January 2016, Nelson’s father bought a historic building downtown and sent her to Pittsburgh to find out how to make popcorn.

The building will host the Christmas shop, the popcorn shop and the coffee shop. Nelson said the coffee and popcorn shops will likely be open to the public by fall. The second floor will serve as extra seating for the coffee shop, by which the Nelsons hope to attract students from Franciscan.

Nelson said, “Building restoration is one of the top ways that local businesses can help revitalize the downtown area.”

Nelson, however, is just one of many young adults who want to rebuild Steubenville and support local businesses. The Young Americans for Freedom club at Franciscan recently launched the The Steubenville Stimulus Project, providing students with a list of local small businesses.

According to its website, “It’s no secret that the economy in Steubenville is suffering. Franciscan University has helped to keep the town above water. But at times it has been just treading water. We can help Steubenville thrive again.”

Whether one wants to support local business or experience a part of local history, the Steubenville Popcorn Company is the place to go.

2017-04-28
Previous Post: Surgeon reflects on physical suffering of Jesus on the cross
Next Post: Austria Adventures: The human experience