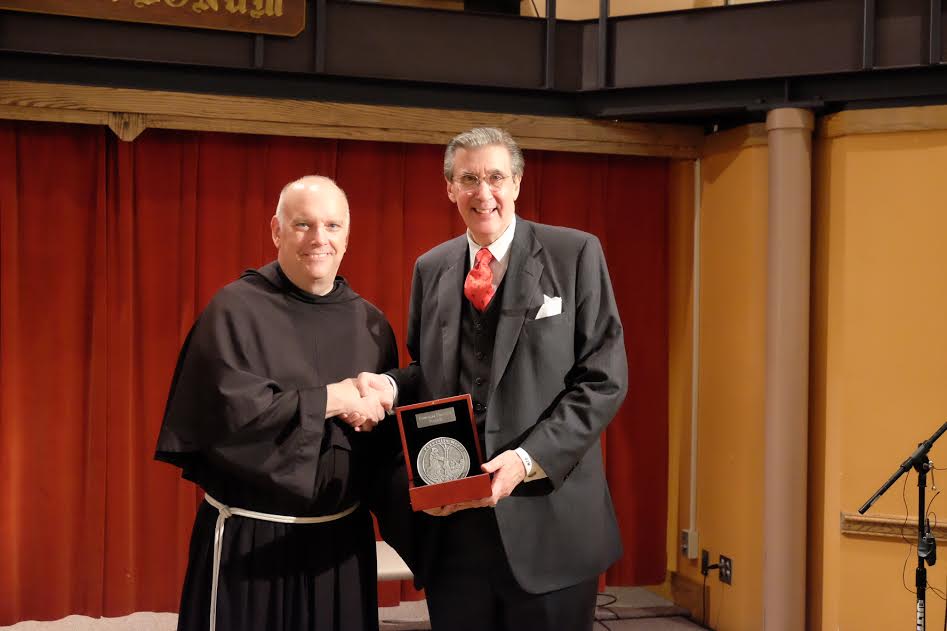 On Tuesday in the Gallery, Aid to the Church in Need received Franciscan University’s Poverello Medal. The medal is the University’s highest non-academic award and is presented annually to a person or organization that embodies the humble virtues of Saint Francis.

George Marlin, chairman of Aid to the Church in Need (ACN) and author of “Christian Persecutions in the Middle East,” accepted the Poverello Medal on behalf of the charity.

ACN reaches those forgotten and suffering faithful in areas of poverty, natural disaster and war. Those on the ground in Syria and Iraq know that not only are Christians being murdered, but holy places and relics are being obliterated.

“They want to destroy every remnant of Christianity in the Middle East,” Marlin said.

The Rev. Werenfried van Straaten founded ACN in 1947, in the wake of World War II. Inspired by the appeals for reconciliation made by Pope Pius XII, Straaten sought to tend to the material and spiritual needs of the suffering German people.

Straaten’s passion inspired thousands of faithful to join the cause, donating food and clothes. Through his tireless efforts he began building a network of support for the suffering Church, starting in the communist countries of Europe and eventually spreading to those tested in faith around the world.

In Dec. 2011, Pope Benedict XVI, recognizing the extraordinary impact of ACN, elevated the organization to a Pontifical Foundation of the Catholic Church. Today, ACN provides material and spiritual assistance to people in over 145 countries.

Through projects such as restoration and construction of churches, transportation for pastoral workers, assistance to refugees and media outreach to promote the Word of God, ACN has helped millions of people worldwide.

The address was eye-opening for those in attendance. Autumn Schimmer, sophomore, commented, “Where are all the feminists when Christian women in the Middle East are being captured, sold, raped and forced to convert to Islam by Islamic terrorists?”

In these dark times, Aid to the Church in Need provides light, hope and “a constant sign that the Church is a dynamic, single, universal body in Christ.”