Professor opens students’ eyes on the meaning of charismatic renewal 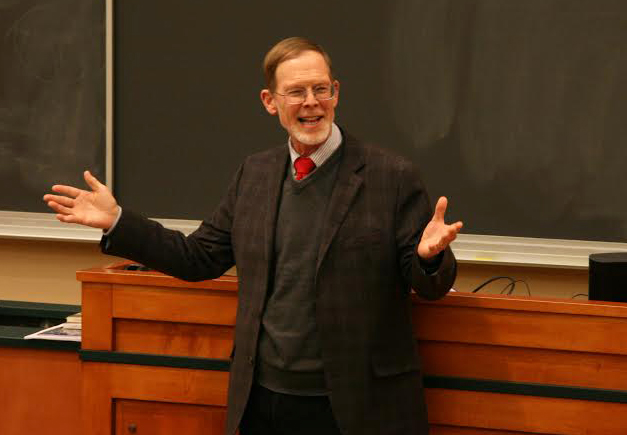 In celebration of the 50-year anniversary of the Catholic charismatic renewal, a theology professor shared some insight on the renewal on Thursday, Feb.16, in Pugliese Auditorium.

Alan Schreck, who holds a doctorate in theology, shared some of the history and spirituality of the charismatic renewal in his talk, giving some insight into the background of the renewal.

“This is not a movement. It’s a current of grace,” said Schreck, drawing on the insight of Pope Francis.

Schreck said that the renewal is not a human movement, since it has no human founder, but is a grace freely given by God. At its heart is the experience of baptism in the Holy Spirit, a term indicating a personal encounter with Jesus Christ as well as a renewal of the graces from baptism and confirmation, said Schreck.

The renewal is based on the principle that there is nothing wrong with asking for more grace, said Schreck, but in fact, Jesus commands asking for grace. The New Testament shows that praying for the gifts, or charisms, of the Holy Spirit was an integral part of the early Church, said Schreck.

“The Church was charismatic from the very beginning,” said Schreck. “(The charisms) were the normal way the Church operated.”

The beginning of the charismatic renewal began at the start of the twentieth century with evangelical Christians, said Schreck. It wasn’t until 1967 that the renewal reached the Catholic Church, when students and professors on a retreat at Duquesne University of the Holy Spirit prayed for the charisms.

After this group’s experience of grace, the renewal spread quickly by word of mouth, primarily on college campuses, Schreck said.

Schreck said, “(The renewal became) the fastest growing Christian movement in the twentieth century. (The Second Vatican Council) opened the door to this current of grace.”

The Church was more inclined to accept the renewal because it embodied the attention to Scripture, involvement in the Church and evangelism promoted by the council.

“This is how wise God is,” said Schreck of God preparing the Church for the renewal.

“I really loved how he put emphasis on the Holy Spirit,” said Callon.

Freshman Tommy Gies said that he appreciated that Schreck explained baptism of the Holy Spirit.

Gies said that he understood the term more fully and could relate it to his own life.

Sophomore Jacob Watson said that he enjoyed learning about the history of the renewal and its “internal workings.”