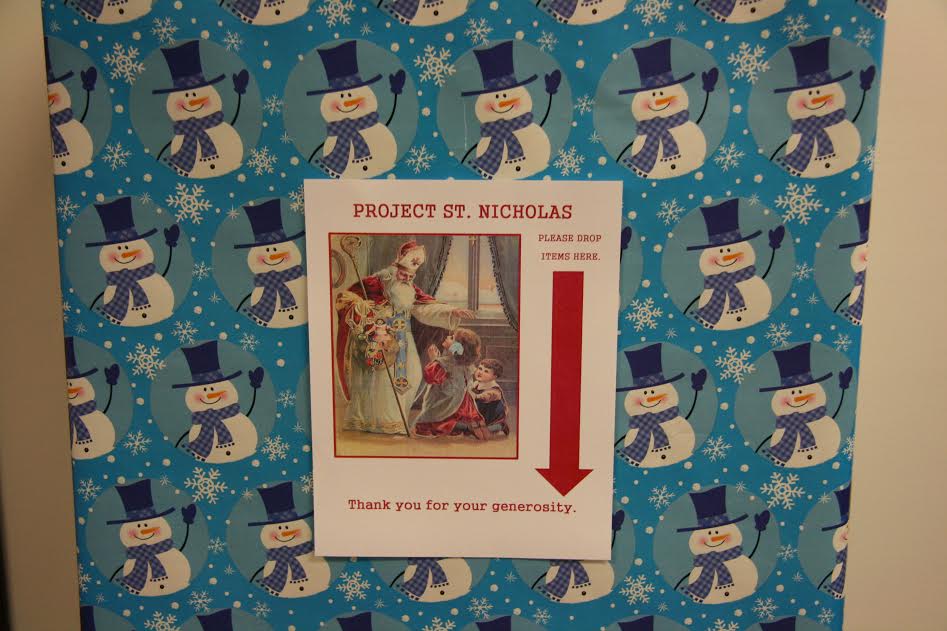 In line with the spirit of giving during this Christmas season, Project Saint Nicholas, sponsored by Franciscan University of Steubenville, is in full swing. The collaborative effort of Christ the King Chapel and the Office of Human Resources aims to collect funds and donated goods for several cooperating charities.

“Last year, we were able to collect over $4,000,” said Pam Salatino, coordinator of chapel ministries administration. For its part, the Office of Human Resources also aims to contribute its yearly quota of gently used toys, games, books, clothing, and the like, to the greater Steubenville area.

The end goal of the project is to deliver the items directly into the hands of the families who desperately need them, during this busy holiday season. “We don’t just hand over checks,” said Salatino.

After the monetary contributions are collected, they will be divided and delivered to Urban Missions and to the Samaritan House.

The Office of Human Resources, facilitator of donations of gently used goods, has been delivering these items by the truckful directly to drop-off points in downtown Steubenville, since the beginning of last week.

“Donations have been very generous,” said Salatino. Through these efforts, she said, “we can give directly back to the community.” She likened the project to the Jesse Tree Program, a project enacted by many parishes throughout the country, one which serves similar needs in communities nationwide.

Since its founding in the late 1980s, Project Saint Nicholas has allowed Franciscan University to play a pivotal role in the betterment of the downtown public. During the project’s early days, rather than overseeing the delivery of funds and goods to the community, the chapel office acted as a kind of pantry. “Families used to come and sort through bikes, toys, clothing and food,” said Salatino.

Over time, it has proven more convenient for the office to sort the goods, delivering them to the community where they are met with a willing reception.

For those on campus who wish to contribute to the cause, donation is as easy as choosing joy. “As a student,” said Salatino, “it just depends what your will is.” She said that the act of donation is a simple, rewarding activity.

Both the chapel office and the Office of Human Resources are still gladly accepting donations. “The final collection cash-wise will be this Sunday, but we’ll still accept donations next week,” said Salatino. Only after the final donations roll in will the funds be split in half for donation.

“We do it because we want to help the underprivileged,” said Salatino, emphasizing the selflessness which she hopes will characterize the attitudes of all who choose to give. “We have a lot of people in our valley who are really hurting, and if we can help the community, it’s a blessing.”

The impetus of the project is the same as the reason behind its year-in, year-out success. “It’s the looks on their faces,” said Salatino, when discussing the project’s longevity. “We’re helping local communities. We’re needed.”

Salatino understands Project Saint Nicholas as a uniting force in the Franciscan University community. “Anything we do, as faculty, staff and students, is in the local community. There is a lot of need here.”

As the project’s description in the chapel bulletin describes, to monetarily or physically contribute goods to Project Saint Nicholas is to love someone in their time of need. Nothing this Christmas season is needed more than the gift of hope, from one soul to another.