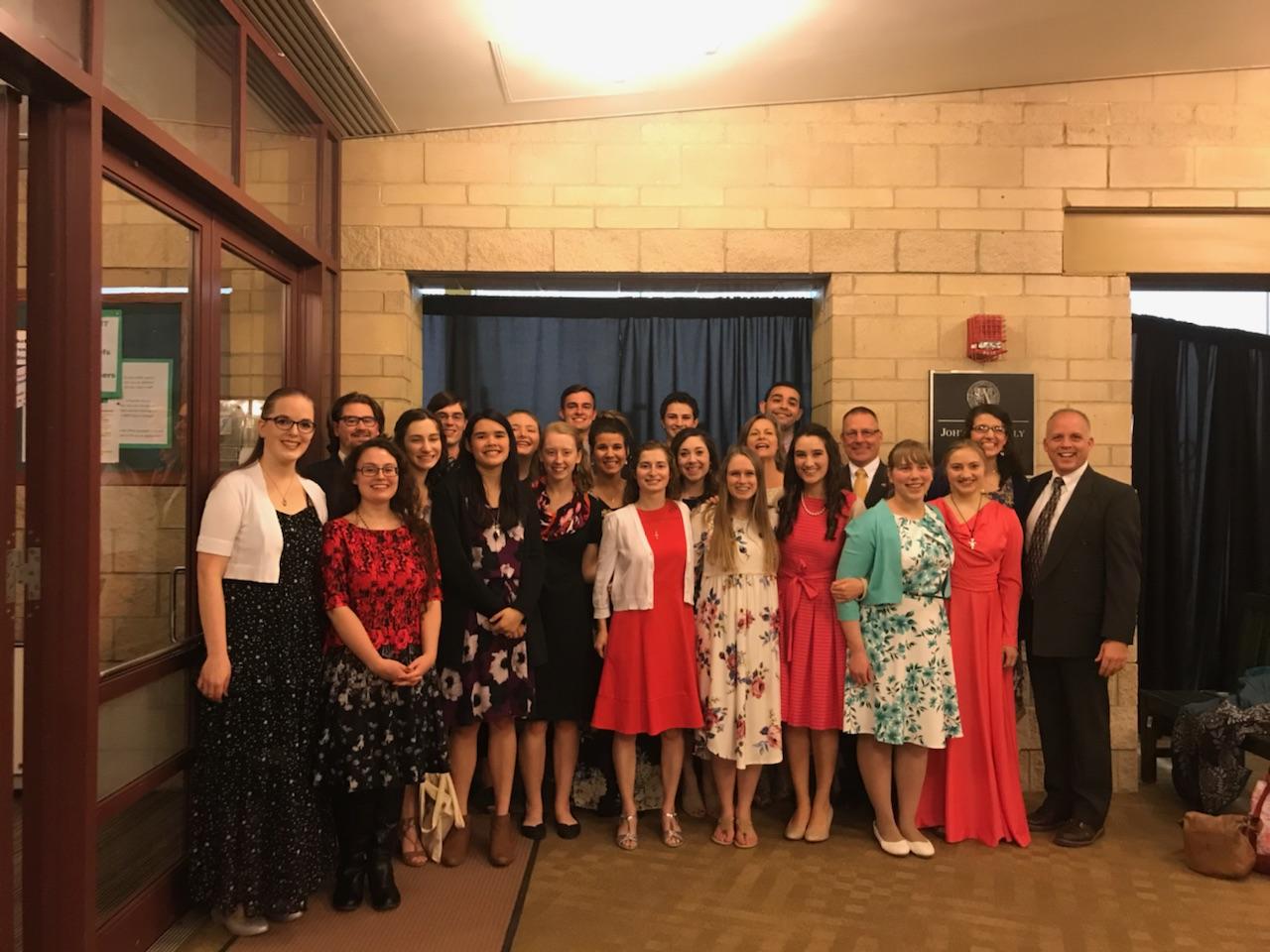 The Easter Vigil is always exciting for Franciscan University, but for seven students in particular, it would mark the first day of the rest of their lives.

The Rite of Christian Initiation for Adults (RCIA) group on campus presented seven students to be welcomed into the Catholic Church this year. Three were baptized at the vigil Mass, and four others joined them for Confirmation and first Communion.

Drake McCalister, professor of Catechetics and director of the RCIA program, said this year was a first for him because the entire group consisted of people seeking to enter the Church, whereas in past years there were also lifelong Catholics only needing to be confirmed. In five years of directing the on-campus program, this is the largest group he has had.

The candidates and catechumens have dedicated almost every Tuesday night since October to this incredible journey of faith.

Danielle Apple, who was baptized at the vigil, said the community of the group was crucial to her. She said, “I thought I was going to be the only person here who wasn’t Catholic, the only person who was going to go through this. … That was really cool, to be with all these other people, all these other students on campus who I see around and know that we’re going through the same experience together.”

The RCIA group also includes each student’s sponsor and a core team of student leaders who help teach different topics. Each meeting begins with prayer and worship, followed by a talk that breaks open aspects of church teaching, from the sacraments to the saints.

Small groups also provide time for each inquirer, his or her sponsor and a core team member to discuss questions about the night’s topic and apply it to their own lives.

“It’s neat to see them respond to the Lord,” McCalister said, as the students “grow deeper in the faith [and] wrestle with questions in that community environment. That’s ideally what the Church should be — not just a place that we celebrate sacraments, but a place of real community and support for one another.”

The year’s preparation culminated in the events of Holy Week, all leading up to the students’ first sacraments at the Easter Vigil.

Apple said it was powerful to know that “there’s a new life in me now and that the Holy Spirit is dwelling inside me now and all the graces that come with that. Being made new, original sin being washed away – it’s so hard to wrap your mind around, but it’s an incredible feeling.”

The excitement of the campus community was tangible that Saturday night, and everyone erupted in spontaneous applause to congratulate the newly baptized and confirmed. Michelle Moellering, a Confirmation candidate, said it was “an emotional moment. Them welcoming everyone, me, into the church. … Everyone couldn’t stop smiling.”

McCalister explained that RCIA is for people who have never had a relationship with Christ before, for Christians who are looking deeper at the Catholic Church and for lifelong Catholics who haven’t received Confirmation.

For anyone on campus who is not Catholic, McCalister said, “I invite them to investigate the Catholic Church and see if, in fact, her claims are true.”

A convert himself, McCalister explained that he knows the joys and struggles of the process. “The reason I’m Catholic today is because of my desire to follow Jesus Christ to the fullest extent possible, and that led me to the Catholic Church,” he said.

McCalister also had a message for all the Catholics on campus: “Remember not everybody’s Catholic!”

He said that Catholics “should be charitably, kindly inviting those they know are not Catholic to investigate the Catholic Church. … Don’t make the poor non-Catholics feel ostracized. Love on them, hug on them, don’t overwhelm them with reading materials.”

The RCIA members’ community did not stop at the Vigil. Apple said, “I need to find out who’s in RCIA next year… and then go and befriend them, and say ‘Hey, I know what that’s like!’”

Moellering said, “Whenever I see (other group members) on campus even now, we always have a smile and a wave to each other, and that’s really nice.”

“I would encourage any Protestants on campus or any non-religious on campus to try (RCIA) out,” said Moellering, “even if you’re not ready to join the Church. It’s a good place to start.”

2018-04-10
Previous Post: Chicago Mission: learning to be Christ and see Christ
Next Post: The show must go on: theatre students to showcase talent in senior one act plays