Reaching the hearts of Pittsburgh’s homeless through communication, compassion 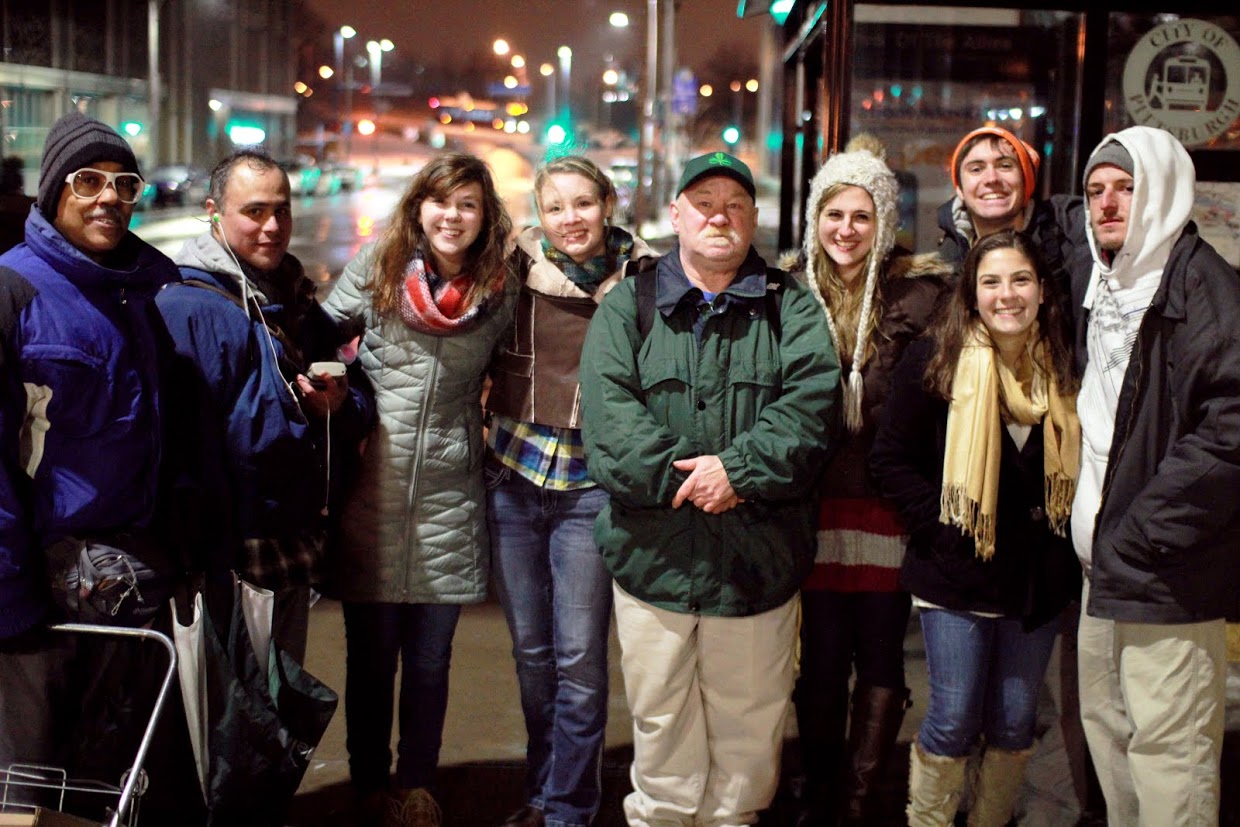 It takes three vans of seven individuals roughly 90 minutes on the streets of Pittsburgh to make an incalculable impact.

Every Thursday evening at 6:30 p.m., students pile into university-sponsored transportation. Sixty minutes and 59 rosary beads later, Franciscan University’s Homeless Ministry goes to work under a pedestrian bridge in downtown Pittsburgh, evangelizing by distribution of resources and an emphasis on personal communication.

After an hour and a half of handshakes, eye contact and introductions-turned-goodbyes, the mission is again fulfilled in the abundance of grateful faces. Some smiles hesitant, most of them broken, all of them grateful, each in itself validates the ministry.

Luis Cunningham, member of the Homeless Ministry core team, said that one of the beauties of this outreach is the fact that the only prerequisite for joining is availability.

Five minutes of briefing is all that is required in order to dramatically better the week of the otherwise communication-deprived homeless.

The vitality of this ministry, Cunningham maintains, is an aspect of the event not limited to the meals provided or the amenities generously donated.

“Food and supplies is entirely secondary compared to communication,” Cunningham said. “The homeless in the area, they can get seven meals a day from other ministries. What they can’t get is the communication.”

The evangelization begins when homeless are encouraged to share in conversation with Franciscan students. Often, those students are reminded just how important their role is by the homeless.

Kevin, one of the homeless, shows up under the pedestrian bridge regardless of the weather. Whether he has a conversation regarding his relationship with family members, the students’ current academic studies or 1960s daytime television (he’s a huge “Leave It to Beaver” fan), the man himself is a testament to the effectiveness of the overall ministry.

Kevin said, “You guys are the only people I talk to during the week sometimes.”

The ministry ends collectively, homeless and students huddled, usually from the cold, strengthened in the bond of prayer.

In acknowledging the risks of a downtown ministry, Cunningham maintains its value and said, “The homeless can feel like they have worth, like they are in some way relatable.”

Ministering to those on the streets whose hearts hurt for compassion more than their stomachs could ever hurt for food remains the goal of Franciscan University’s Homeless Ministry.

In the end, the ministry aims to become the manifestation of Matthew 25:40: “Whatever you did for one of the least of these brothers and sisters of mine, you did for me.”