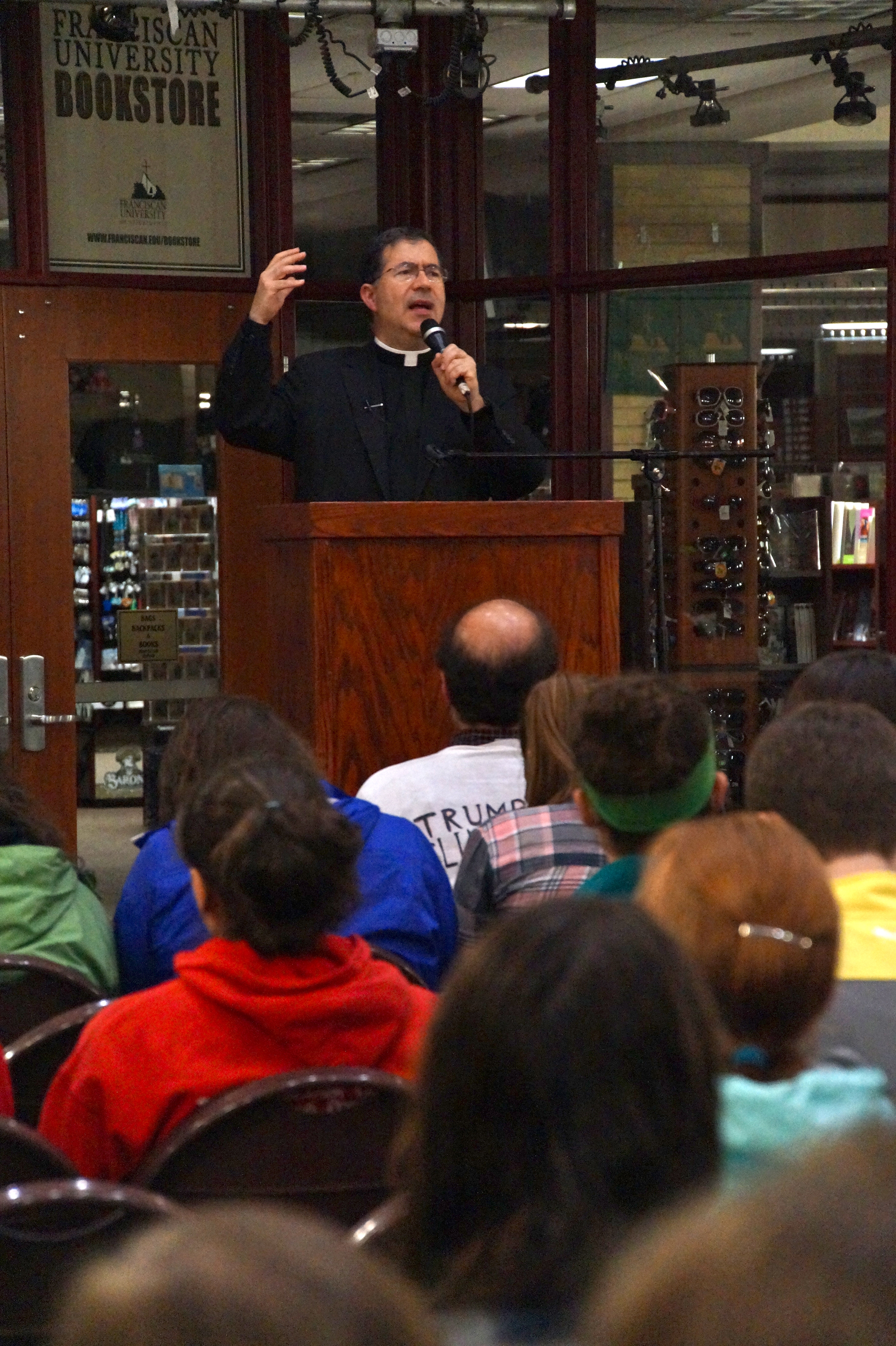 The Rev. Frank Pavone, national director of Priests for Life, discussed the relationship of Catholicism to the upcoming presidential election when he spoke April 11 in the atrium of the J.C. Williams Center.

“If I preached for the protection of unborn life, it seems like I’m endorsing the Republican Party,” said Pavone. “But let me ask you, if tomorrow the two parties switched their points of view, what about my preaching would change? Nothing.”

In his talk, Pavone drew a connection between political action and the offertory said at Mass, saying, “We say ‘earth has given and human hands have made’ because the Body of Christ is a combination of God’s action and man’s action. We don’t just stand around and wait for God to act, and we don’t do it by our own power. It is an act of cooperation between God and man.”

He also said, “Human progress and the growth of the kingdom are not identical, but they are not entirely divorced either.”

Voter registration efforts have to be pursued vigorously and in a non-partisan way, Pavone said.

He added, “We are permitted under church law and civil law to educate our people about where the candidates stand on the issues that are of importance to us.”

Pavone encouraged those in attendance to become involved in educating Catholics on those running for public office, including through the distribution of voter guides, saying, “it needs to be a C3 Qualified (‘non-partisan’) voter’s guide, but we can do it as long as it covers a variety of issues and does not indicate a preference to one candidate.”

Pavone recently testified in the United States Supreme Court in the case of Little Sisters of the Poor against the federal government.

The Little Sisters hold that the mandate requiring employers to provide contraceptives and abortifacient drugs under the Affordable Care Act violates their First Amendment rights and that the proposed accommodation for those who object on religious grounds is insufficient, explained Pavone.

Pavone said, “The accommodation requires us to sign a piece of paper authorizing it to happen through our insurance policies. How does that not involve us?”

Through Priests for Life, Pavone helped to craft an alternative proposal that would allow insurance companies to contact employees directly at which point they could accept or decline the services on their own, he said.

Calling on students to “renew our missionary zeal,” Pavone specifically warned against becoming complacent in the Catholic-friendly culture at Franciscan University.

In an interview with The Troubadour, Pavone further expounded on the role played by students, saying, “We are called to reconcile a sense of confidence in the God who calls us to change the world and in the system that we have in America. Positive, rather than cynical, is the call that the church always places on us. And that can start right here on campus. I always feel very welcome here, and I think that this is fertile ground for this message.”

Pavone brought with him a first-class relic of Pope St. John Paul II given to him by the late pope’s secretary and concluded his talk by using it to bless those in attendance.

Pavone said that Priests for Life aims to bring together “a symphony of ministries,” such as Rachel’s Vineyard, the world’s largest post-abortive healing ministry; Silent No More; campaignprayer.org; politicalresponsibility.com; and Stand True, Priests for Life’s youth outreach.

Tommy Valentine, president of Franciscan University’s chapter of Young Americans for Freedom, said, “He said a lot of things that the campus needed to hear.”

Valentine continued, “At secular schools people have to intentionally seek out community, just by nature of being in a secular place they feel called to go out and do things. Whereas here there is the cliché that we’re in the bubble and we live on the hill. But Christ makes it clear that he gives us community to nurture us so that we can go out into the world.”

Young Americans for Freedom and Students for Life collaborated to bring Pavone to Franciscan.