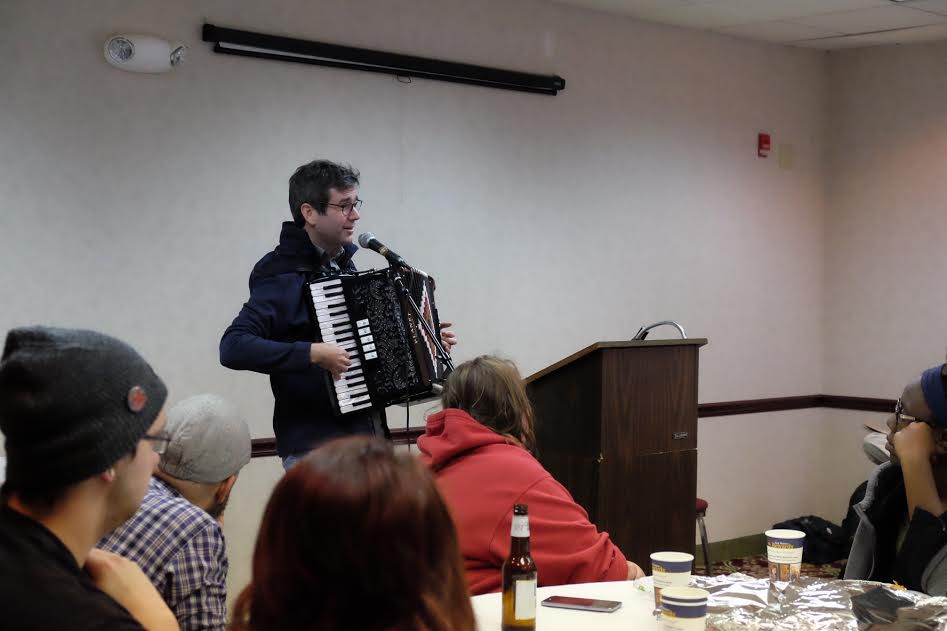 “If you haven’t given your life to Jesus, you’re about to.” Franciscan professor Bob Rice, who holds a doctorate in theology, sought to demonstrate evangelization by means of a somewhat unique medium: confident accordion playing.

Those who packed the Ohio Valley Room of the Best Western University Inn, present to witness Rice’s Thursday evening talk on evangelization and ministry as part of the Theology on Tap series for graduate/nontraditional students, responded favorably to his musical talents and advice alike.

Rice’s message was expounded upon in his forty-minute impactful delivery, but well summarized in the refrain of his accordion-accompanied song: “Let this be a Church again, come back to your home, remind us what these hearts for for, to worship you alone.”

After Rice defined evangelization as God-given good news, he sought to express his appreciation for the congregation of avid believers on campus. “Steubenville attracts a lot of people excited about their faith,” he said. He stressed, however, that such concentrated belief is “certainly not the national trend.”

Evangelization begins, he said, “by letting God change us.” That change, he continued, must manifest itself in the invitation “to bring Christ to others in the way that we live.”

Misconceptions regarding religion and heaven, Rice said, largely prevent individuals from correct understandings of the faith. “A lot of people think religion is about being a good person,” he said. “And most people are okay with God as long as someone else does it.” The practice of evangelization, he said, remains a challenge.

Rice presented the example of the rich young man in Matthew 19 as the antithesis to modern-day ministry. “That’s what the world wants us to be: rich and young, an anonymous consumer. The religion of America is stuff. It’s buying stuff, and being owned by stuff,” he said.

Conversely, the distribution of the gospel necessitates an emptying of self, Rice said. He repeatedly referred to sharing the faith as a worthy sacrifice, one that connects the experience of faith with its distribution.

“The greatest thing we can have is Jesus,” said Rice in conclusion, asking those in attendance to understand the gravity of evangelization. “(Christ) wants 100% in return. And everyone here can afford 100%.”

In attendance to the event was Meg Hruz, a junior theology and catechetics major, who commented immediately on the effect which Rice’s musical talents: “It’s one thing to talk about evangelization. It’s another thing to bring in an accordion and sing about it.”

Said Lucas Comeau, a senior theology and philosophy major: “We often feel like we have to argue the faith into someone’s heart. It’s much more of letting the Holy Spirit enter someone’s heart.”

The evening began at 7:00 p.m. with an hour of informal fellowship and refreshments, items characteristic of each Theology on Tap event hosted by Franciscan University’s Graduate/Non-Traditional (GNT) Outreach.