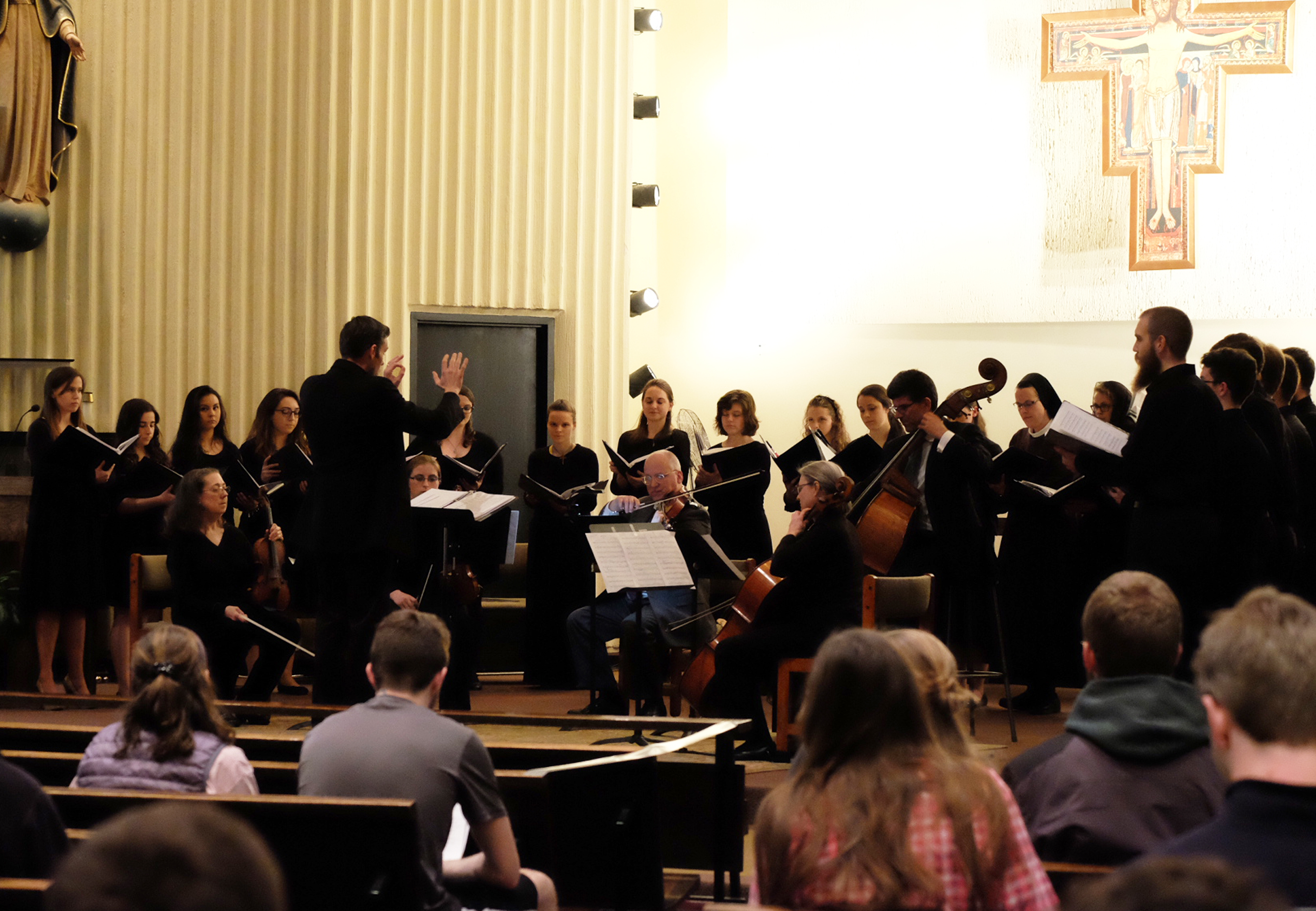 The Schola Cantorum at Franciscan University held its audience spellbound at its evening concert given in expectation of the beginning of one of the biggest celebrations in the Catholic Church, the Triduum.

The Schola featured several pieces of Lenten music, including the “Stabat Mater” by Josef Rheinberger and “St. Mark Passion” by Charles Wood.

The “Stabat Mater” portrays the sufferings of the Blessed Mother at the foot of the Cross, and the “St. Mark Passion,” written by Charles Wood, is the story of Jesus Christ’s suffering and death as told in the gospel of St. Mark.

While the “Stabat Mater” was a moving piece, including the harmonious tones of soprano voices floating from the women and the deep bass tones from the men, the Passion narrative highlighted more of a story, with the different voices and talents of choir members emphasizing the characteristics and emotions of each character in the narrative.

Taken from the gospel, the Passion was narrated by several members of the Schola, each as a character of the narrative.

The voice of Jesus, performed by Joseph Andreola, a graduate of the 2016 class, brought to life the humble yet strong voice of Jesus Christ through his baritone voice, which lent much to the emotion of the narrative, especially in his exchange with the chief priests and Pontius Pilate.

The performance was marked with many solemn moments, which climaxed into when Christ died, when everyone present in the audience as well as the choir knelt for a few moments of silence.

Students who attended the concert said they were incredibly moved with the Schola’s interpretation of the Passion narrative.

Cameron Erickson, a theology and catechetics major, said, “To hear the emotion in a story that I’ve heard all my life … just to hear the music elevate you to such a spiritual and emotional place was absolutely breathtaking.”

“It’s just a beautiful, prayerful experience of the Passion,” said James Monsour, a senior humanities and Catholic culture major. “It’s maybe not for Mass, but it’s got its own place as an art form that still lifts you up.”

Having a first experience hearing something like this concert, Monsour said, “It was tremendous and really (a) lifting up of the heart and soul.”

2017-04-10
Previous Post: Speaker reflects on the reality of God and the Church’s understanding of evolution
Next Post: News Briefs – National and International