SEEK 2017 students return to campus with a missionary spirit 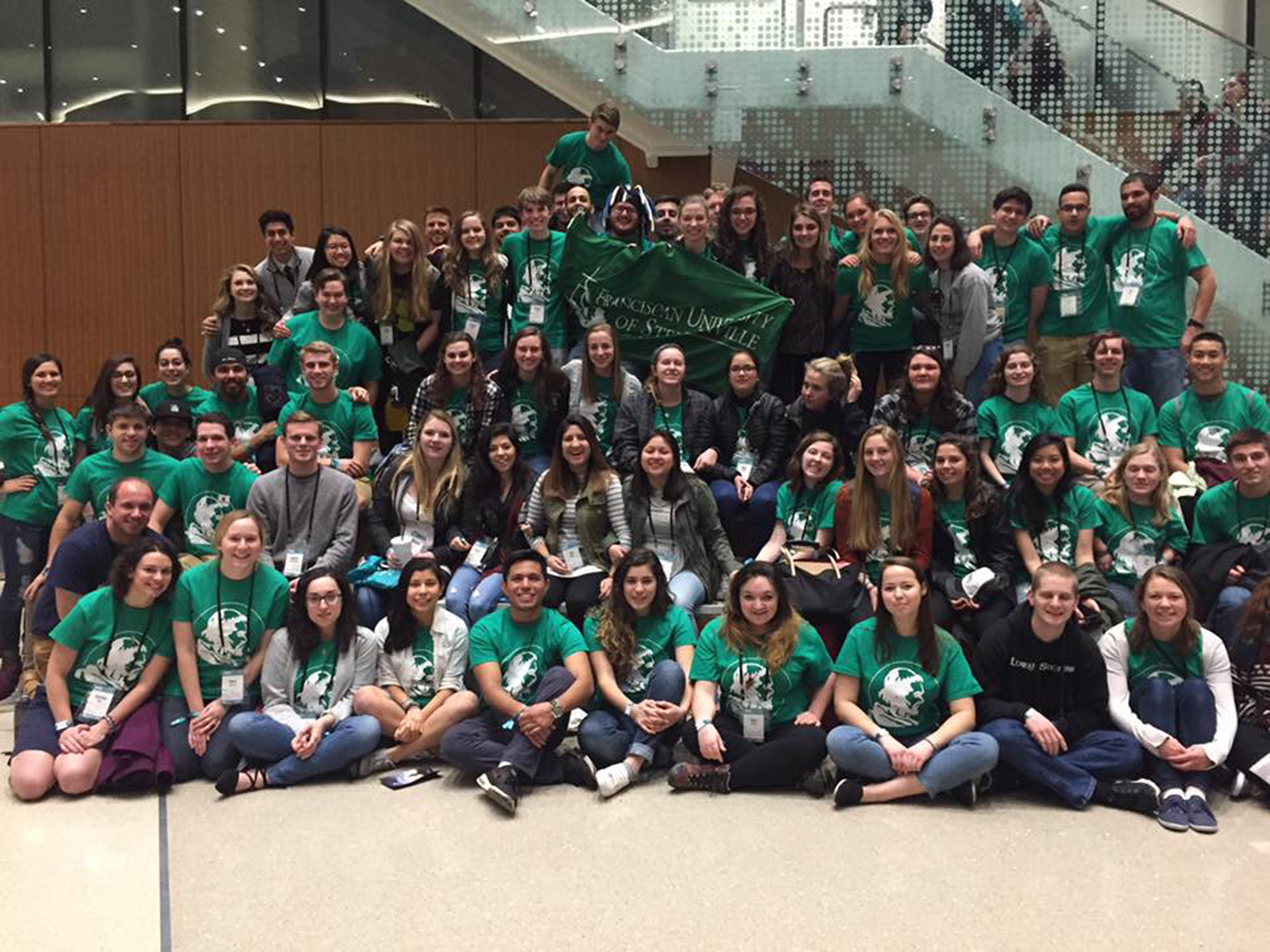 Along with over 13,000 people from all over the country, a group of 100 Franciscan University students experienced a radical call to mission at Catholic conference in San Antonio, Texas.

SEEK 2017, which is a week-long conference for Catholic university students, is put on by the Fellowship of Catholic University Students, which is an organization that ministers to college students on their campuses all across the country. Because of their role in SEEK, the missionary spirit of FOCUS pervaded the conference.

According to the conference website, SEEK, a biannual conference, is an outreach of FOCUS.

After the week-long conference, thousands of students traveled back to their universities, bringing with them a heart on fire for Christ and His mission. Over the five days at the conference, students heard talks and joined in praise, worship and adoration of the Lord.

Nathaniel Binversie, Mary Adam and Erin Sarotte were part of a group of FOCUS missionaries from Franciscan who joined students at the conference.

For FOCUS missionary Nathaniel Binversie, seeing thousands of students come together in adoration of Christ in the Eucharist was at the heart of his experience of SEEK.

Binversie said during adoration one night, multiple priests began processing around the arena with the monstrance and, unprompted, students started to follow the Eucharist.

“To see the pride of place they put on Christ,” said Binversie, “their desire to be close to Him.”

FOCUS missionary Mary Adam was also impressed by the sight of the huge crowd gathered for the sole purpose of praising the Lord.

Adam said it was striking to see the group of students, priests and campus ministers as one group of faithful.

Courtney Bonty, a junior theology major, said SEEK helped a lot of students see the importance of FOCUS’ mission, which is to make disciples of all nations and to prepare students to evangelize both during and after college.

“It’s unique to see all these students come out wanting the same thing and realizing the need to grow in that way, with authentic friendship, divine intimacy and spiritual multiplication,” said Bonty. “A lot of people are on fire and ready to share the mission of what FOCUS stands for and what they got out of SEEK. And SEEK honestly brought most of us to the realization of the need to be together, to grow together in an authentic way.”

Bonty said the conference called students to realize their primary vocation is not to be students, but to be saints. SEEK called students on to authentic friendship as a way to bring others on the journey to sainthood, she said.

Bonty said many of the talks challenged students to address the need for authenticity and deeper relationships.

“A lot of the talks were raw and gave us a purpose as students to see that we have a lot that we can offer, but we have to want it,” said Bonty. “We can be like everything’s fine, but it’s not, and to be able to see that need is really unique.”

To Binversie, SEEK was a call to realize that the Catholic world is on fire for the faith. He said that it was striking to see the depth of faith in students from universities across the country, whose faith grows in response to daily adversity.

Binversie said that the opportunity to be challenged and grow in faith exists at Franciscan, even though it is harder to see.

But SEEK gave many students the eyes of a missionary, which reveal that the primary mission field isn’t across the globe, but right here at home, said Binversie.

FOCUS missionary Erin Sarotte said that SEEK’s call to mission is difficult, but there is an easy way to practice this call.

“As students, it’s hard to be open to opportunities like this, but a simple ‘yes’ can go a long way,” said Sarotte. “So just always remind yourself to say ‘yes’ to the little things, because they may go a long way, and SEEK is the perfect example of that, and I think it’s going to show on this campus.”