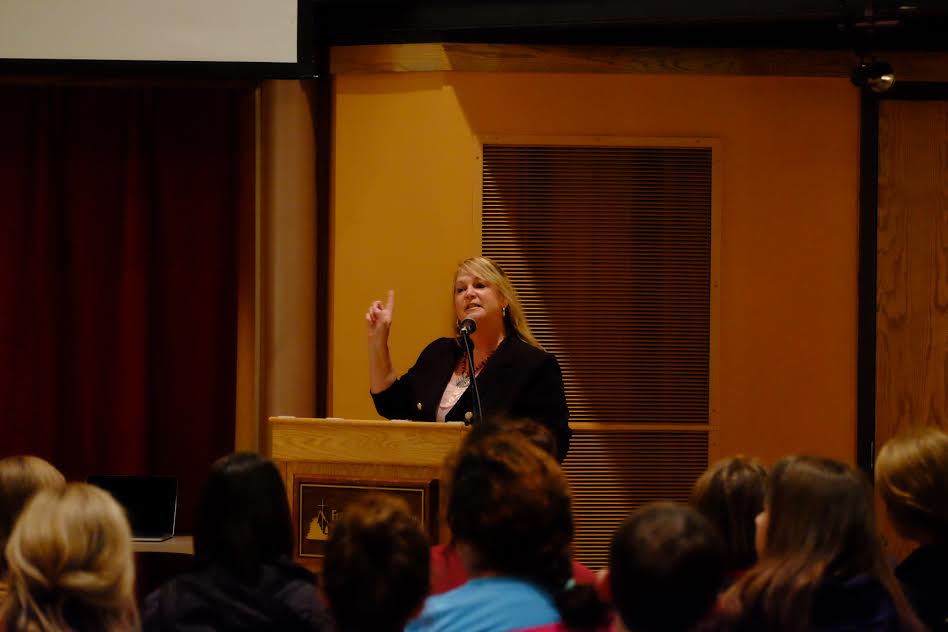 Theresa Flores, founder of TraffickFree and Save Our Adolescents from Prostitution, or S.O.A.P., gave her personal testimony of surviving human trafficking to raise awareness of the human rights issue. The event was coordinated by Joanne Kersten, a senior social work major, as part of her Center for Leadership Senior Capstone Project. Kersten was assisted by Noe Carrasco, a senior philosophy major, who helped with the planning of the event and with the technical work.

Flores explained that any type of forced labor or any use of minors for commercial sex is considered human trafficking. She said that it is widespread in the United States and that Ohio is the fifth leading state in the nation for human trafficking.

“This is not a small problem,” said Flores. “I can almost guarantee this is happening in every ZIP code.”

Flores shared her own story of being tricked into human trafficking in high school in an upscale Detroit neighborhood. Flores said that she was a “good Catholic girl” and had a happy life, but “none of that protected me.”

Flores said after two years of sex slavery, she had a moment of despair. It was then that she had an encounter with a stranger whom Flores called her angel. Flores said for the first time, someone asked, “Can I help you?”

Flores said that it was years before she told anyone what had happened.

She explained that by removing demand for victims, human trafficking could be ended. She said this means going after things like pornography, magazines like Cosmopolitan and video games like Grand Theft Auto that contribute to a culture of demand.

“We need to take the initiative and get out of our comfort zone,” said Flores.

Sophomore Kateri Spencer said, “I liked how she didn’t beat around the bush for any of it.”

“She just said it straight out, even the gruesome parts,” said Spencer. “Her honesty really opened my eyes.”

“I just appreciated her vulnerability,” said senior Sarah Miller. “She was very honest about her experience and gave good advice.”

Junior Teresa Majerowicz said that she was glad that the issue is being brought to light.

Majerowicz said that she thinks the Capstone Project on human trafficking is good because the issue “really needs to be talked about.”