Serious drama invites reflection on responsibility to justice in community 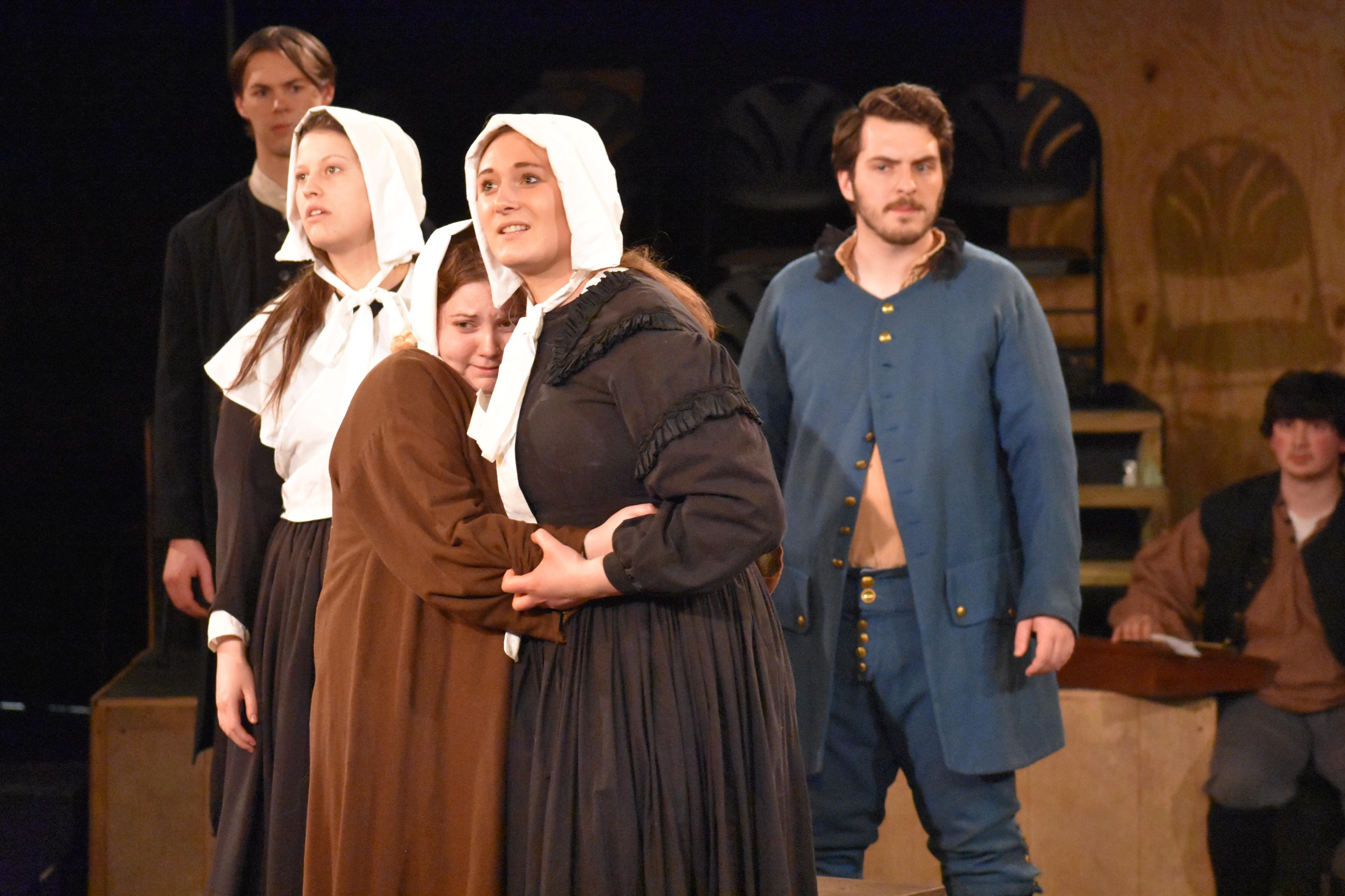 Stark white posters asking major life questions, such as “Will the truth ever be told?” are hung around Franciscan University’s campus as Anathan Theatre’s first introduction to its spring production, Arthur Miller’s “The Crucible.”

While most people are vaguely familiar with the show as having something to do with witchcraft and Puritans, Director Monica Anderson, who holds a doctorate in theater from Bowling Green State University and is chair of the department at the university, claims that the show is in fact not focusing on witchcraft at all. Instead, she maintains that the focus is communal culpability in the face of injustice.

When deciding on a show for the semester, Anderson said she kept “finding instances in our world today where I was seeing people play fast and loose with the truth.” The play demonstrates this unfortunate reality by highlighting instances of “suffering injustice at the hands of those abusing their power for personal profit.”

The story of one community’s guilt during the Salem Witch Trials “challenges us to consider the lengths that people in the play are willing to go to,” said Anderson. People ought to “consider how far they’d go to see that justice is done and truth is spoken,” she said.

One of the most interesting and challenging elements of the show is that it will be performed in an arena setting, with 30 seats on the stage around the action. Anderson said she “enjoyed coming up with ways to highlight the common responsibility,” giving members of the audience an “opportunity to be much more intimately involved.”

As “this was a play that was insistent regardless of who I might have at my disposal,” Anderson said she was “taking a risk,” since she didn’t pick it based on the skill sets of the actors. However, she seems to have found just the right people.

Senior Jeremy Seal, playing John Proctor, has found the experience of playing someone completely different from himself to be challenging but rewarding.

“It’s a challenge because I’ve only played one-note characters,” said Seal. “I’ve found the more difficult thing is balancing the big angry outbursts with a kind of level-headedness and sweetness, trying to make him seem like a reasonable person who has a temper. … He is such a non-conformist person.”

Senior Rachel Rudegair, playing Elizabeth Proctor, described a similar experience in developing a character she described as “staunch yet fragile.”

“The most exciting thing is playing someone so different from myself,” she said. “She has all these emotions but she doesn’t wear them on the surface. … She does so many things that I struggle to understand.”

However, Rudegair has found incredible support from the director as well as the cast.

“Dr. Anderson has the ability to make you feel free to experiment and ask questions and mess up,” she said.

Rudegair shared that with the heavy subject material, it’s often good to “laugh through rehearsal to break up tension.” She has benefited from the positive atmosphere of her fellow cast members, because “working in an environment where you’re not confronted with judgement or critique from your cast members is a rare thing.”

One major obstacle during production, according to Anderson, was the dismantling of the set halfway through the semester while Physical Plant took on the long-awaited project of tearing down the elevated stage, which led to a loss of access to the space for a week as well as a different perspective from the audience, so that much of the show had to be re-worked.

“We went back to the beginning with blocking and much of the early work was lost,” said Anderson. She appreciated the cast’s “willingness to adapt and do the repair work.”

Rudegair, however, found the temporary shift in location helpful, calling it “less intimidating.” She said that being in a smaller space was helpful to focus on communication between actors and their personal intentions.

Though the subject matter of the show is dark, Rudegair said that it is “stories of suffering and trial where there isn’t always a right or wrong answer” that are the most impactful.

For Rudegair, the play is a reminder that “any ideology can be used as a vehicle for petty grievances and resentment instead of the Christian search for truth and charity.” She said that

it speaks to Franciscan students because “it’s easy to get caught up in a way of thinking, that your opinion of someone is justified and righteous.”

“People love comedy,” said Anderson. “I hope they won’t be deterred by a modern tragedy. The purpose of theatre is to prompt reflection on important issues … Especially at a university, people should regard theatre as more than a chance to escape. I’d like to see people embrace the opportunity to change in a serious drama and consider what it means to them.”

“It bears on how we think about other people,” said Seal. “It’s a great human story and I’d like for people to be moved by it.”