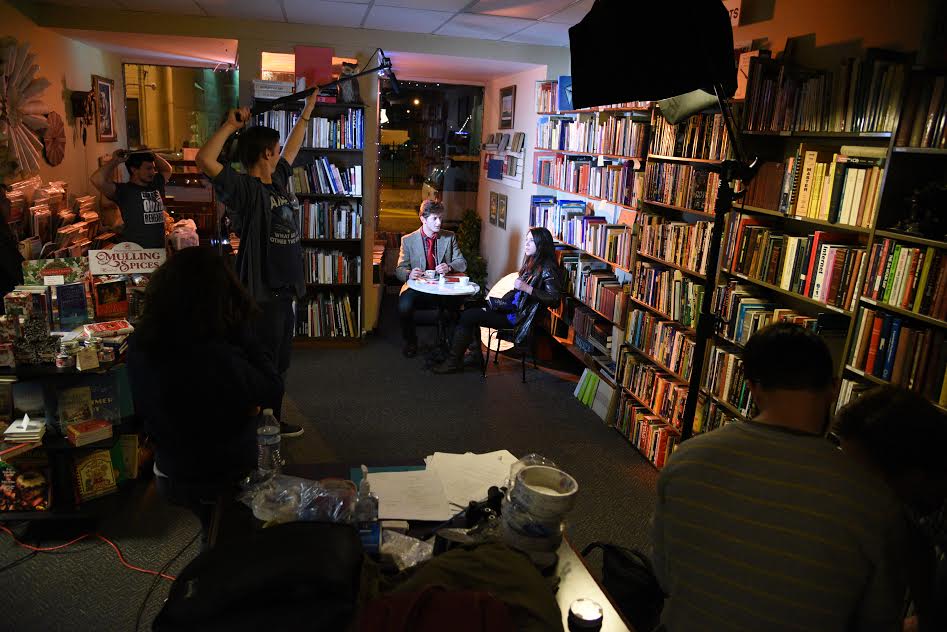 In the words of sophomore Patrick Neve, “nothing like this has been done at Franciscan University in recent history.” He was referring to a recently produced student-run short film.

Directed by sophomore Giovanni Stroik, the president of Franciscan’s Student Creative Arts Network (SCAN), and produced by senior Hank Meldrum, SCAN’s vice president, the short film “Under the Flower” is still in the editing phase.  However, Meldrum said that it will be finished in time for the Student Film Festival, to be held in Anathan Theater Dec. 9 at 7:00 p.m.

Because of Stroik and Meldrum’s intimate involvement with SCAN, the film was made in association with that organization. According to Meldrum, “this was the first semester we had a budget for filmmaking (from SCAN).”

Neve noted the time and care put into each scene, citing that “70 hours were spent shooting a 27-minute film.”

Meldrum conceived the idea of making a student-run short film last June.  According to Neve, Meldrum simply “sent out an e-mail (to all interested) at the beginning of the semester” since he viewed making a short film as “provid(ing) students with an opportunity to work on a project” in a controlled “environment as close to an actual film set environment as (possible).”

The film’s title comes from a line in Shakespeare’s “Macbeth,” when Lady Macbeth says, “Look like the flower, but be the serpent under it.” When applied to the film’s plot, the title implies the notion of “conflict beneath the pleasant appearance” of “an average week in (a character’s) life,” in Meldrum’s words.

According to Meldrum, the two major characters in the film, Celeste and Simon, “personify the concepts of depression and anxiety,” respectively.

Simon, played by senior Nick Vicinanzo, who will be attending graduate school for acting, spoke about his role as “comical, but somewhat true to life,” because anxiety “is something we all experience … in different ways.”

Vicinanzo said his character “wasn’t quite as negative as anxiety generally is when it hits us” since he exaggerated his character’s real-life counterpart. All in all, Vicinanzo described how he played his role as “over-analyzing and obsessive-compulsive, but in a comical way,” so “we laugh about it (and more deeply realize) it’s a serious issue.”

Senior Caroline McCaughey, who played Celeste in the film, summarized her role as “playing the kind of straight character against anxiety,” as a counterpart to Vicinanzo.

Alumnus Philip Buss, who graduated in May, played the supporting role of Ellison, rounding out the acting staff.

Franciscan faculty were especially proud of the professionality of the scenes shot. In fact, Meldrum hired a professional musician, Jessie Villa of Music City East, a music company based out of Nashville, Tennessee.

Junior Josh Cash, the audio director, emphasized that no media project at Franciscan has matched this film in quality.

To further the film’s publicity, Meldrum said that he might make a trailer for YouTube, eventually uploading the whole movie to YouTube. Meldrum also possibly hopes to submit the film to film festivals, such as the New York Film Festival.

Meldrum’s sister, Lilianna Meldrum-Serbicki, who graduated from Franciscan in 2009, wrote the film’s screenplay.

2016-12-07
Previous Post: Ultimate Frisbee team on FIRE for the sport
Next Post: First Franciscan University student to be featured at major conference