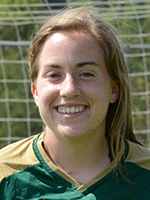 The Franciscan University women’s soccer team is off to a positive start, thanks in large to junior nursing major Clare Kennedy. A transfer from Creighton University and current Baron of the Week, Kennedy recently recorded two goals and an assist in a 4-2 win over Thiel College.

Describing her recent achievements against Thiel, Kennedy first credited the Lady Baron backfield. “I don’t think defense gets enough credit. It’s a build from the back end effort.” After facing Chatham at home on September 17, the women traveled off campus to face Waynesburg University on September 19.

The Lady Barons will need to build on Kennedy’s success, as September 24 marks their first conference match. “All the games leading up to conference we’ve tried to improve, regardless of what the score is,” she said.

The right forward’s adoration for the team dynamic is as obvious as her on-field ability. “Now that I have this, I don’t think I could play for any other team….We play for each other and we play for God” said Kennedy, identifying a motivation deeper than athletic victory. “The team is very close and what unites us is our faith.”

2016-09-18
Previous Post: Of Goats and Faith
Next Post: Cardinal Newman expert explains the importance of tradition in understanding truth