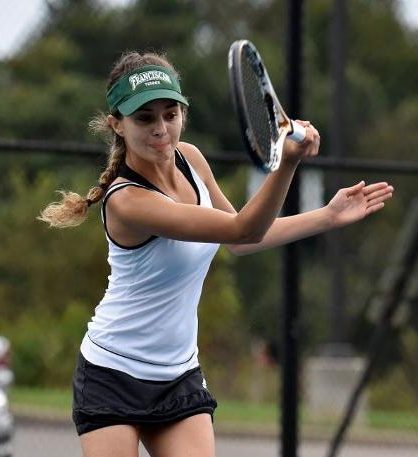 Sophomore finance major Julia Razook has been making things happen for the Lady Barons ever since her return from a semester abroad. During her freshman year, she was named AMCC Second Team All-Conference, finishing 9-2 in singles play with a 7-1 conference record. Now a year older, she looks to pick up where she left off.

In just her second year with the program, Razook has in 2017 provided an instrumental singles victory against Ave Maria while in Florida for spring break. She said the experience was a highlight of her semester: “We got to play a lot of tennis, the weather was beautiful and I enjoyed quality time with my teammates after my fall semester in Austria.”

Despite her successful campaign this far, she’s still returning to form.

“This season has been all about getting back to my pre-Austria game,” said Razook. “I think I’ve been getting closer and closer to it with each practice and match.”

She cited consistent groundstroke depth and an improved mental game as two visible improvements in her game since the season’s onset but said her service returns are still a work in progress.

She said she intends, over the course of her remaining seasons, to stay undefeated in remaining conference play and to record a second consecutive AMCC championship title for her team next year. And if she continues to notch singles and doubles victories at the pace she’s proven this season, the team is likely to watch those goals and more transition into reality.