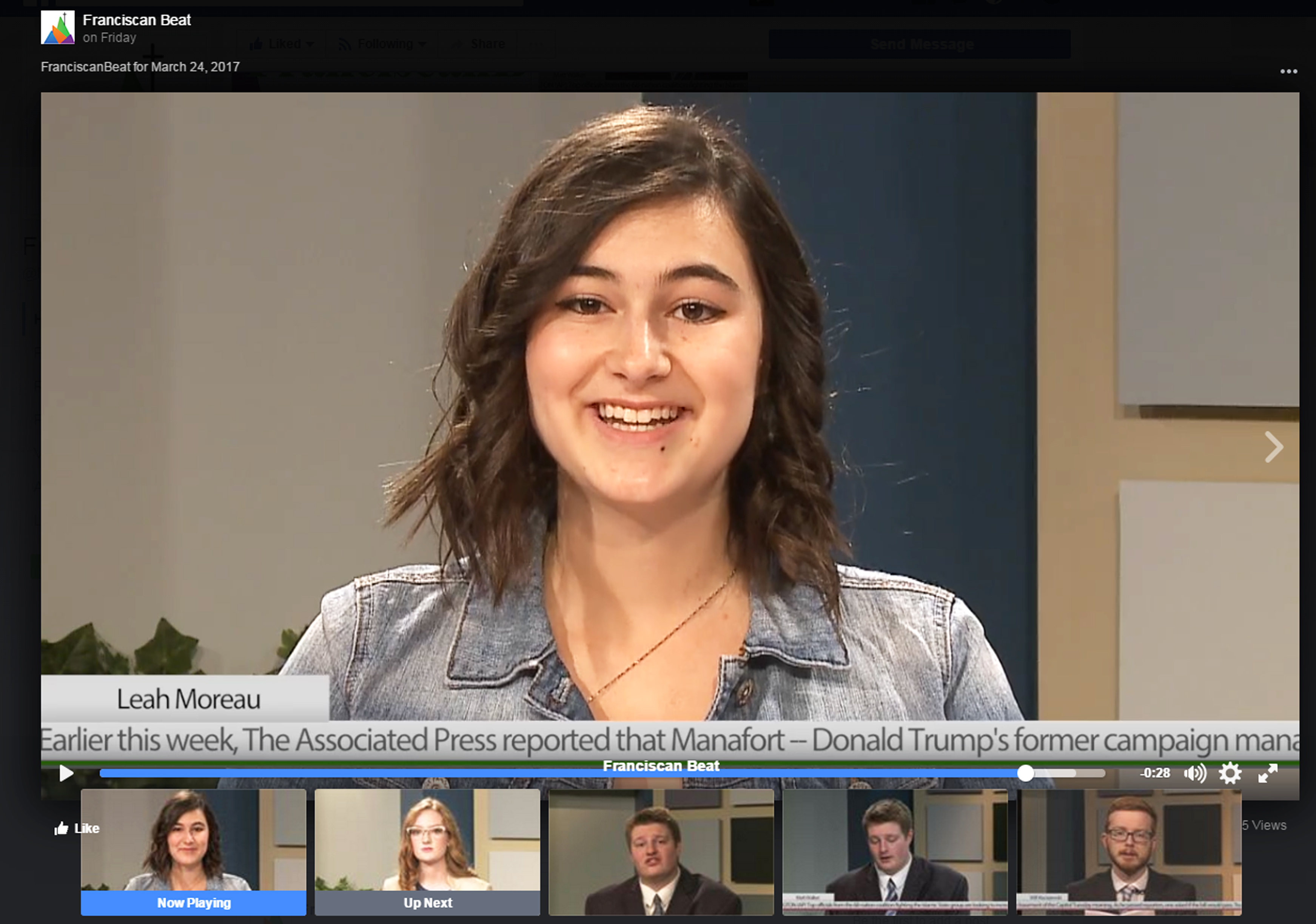 Doors are opening wide for new opportunities in the communication arts degree.

No longer will students just be able to be heard on radio through Franciscan University of Steubenville’s station, Franciscan Effect, but now they can be seen on television through the recently established newscast, Franciscan Beat.

Communications department head David Schaefer, who holds a doctorate in communications, said, “The idea of this has actually been percolating in our minds for many years … probably 20 years ago (Professor Emeritus) Dr. (James) Coyle and I talked when we started the radio station Franciscan Effect (formerly Franciscan Spirit).”

The reason for this initiative was so that students could get practice in daily video and audio production. Schaefer said the university’s broadcast “Franciscan University Presents” prevented the department from boosting the audio part of the plan.

Though a long time in coming, the brainstorming for the specific format of Franciscan Beat began about three weeks ago, said Schaefer.

“Last year, we talked about it and we were looking at our schedule and thought this would be a good semester to implement this,” said Schaefer.

The department decided to begin halfway through the semester as a trial run in order to work out the procedure. The newscast includes a news summary consisting of 10 stories and a weather report each day, approximately 4-6 minutes long.

“We have a crop of students that is interested,” said Schaefer, “and we have the equipment and software.”

Auditions for news anchors were held before spring break, and candidates had to perform a one-minute newscast. The result was five regular anchors. Students are producer anchors, while video lab assistants can work as assistant producers.

Schaefer, who is an executive producer along with Professor Andy Bonjour, said that the Franciscan Beat will be an asset to giving Franciscan students an edge in the career field.

“You have to get practice on a regular basis if you want to complete the degree and get a job—not just one time only for a class project, but something you can do on a regular basis to develop that skill over time,” Schaefer said.

Schaefer said he hopes that the work experience can serve as a news incubator. After spending at least two hours a day over the past week training the new staff, and he foresees that “in a week or two I won’t even have to show up. They can do it on their own and they’ll have this machine well oiled and be able to crank it out … It’s exciting that they want to produce this, and we want them to be independent.”

Ultimately, the goal of Franciscan Beat is to give students an experience like the “real world” of news. Schaefer said he wants students to overcome the idea that they have a whole semester to work on a newscast.

“You have crank out stories every day, you have to have a routine to be able to produce professional and reliable content,” said Schaefer. “You don’t start off that good. It’s not about making the perfect television show.”

Students in the major need to be “outgoing and excited enough to be open to potential criticism,” said Schaefer.

Leah Moreau, freshman communication arts major, said, “We’re very excited because it’s a new opportunity for us as majors and we get more experience in every area: camera operating, anchoring, having that speaking practice. It’s a good starting point and we can grow it in the future.”

The department, which has an Associated Press Affiliate Account that it is allowed to use for campus newscasts, uses Facebook and YouTube as its outlets of production since there is not a television station on campus. Franciscan Beat can be found at both sites under its name.

“It had always been my dream as a child to be a reporter,” said sophomore Rachel Rander. “Getting to have the practice is setting me up to possibly be able to achieve something like that.”

The department has only optimism for the future of Franciscan Beat and the effect it will have on furthering the careers of many students. The commitment of the particular students involved at its genesis will establish a foundation on which it can grow and flourish.