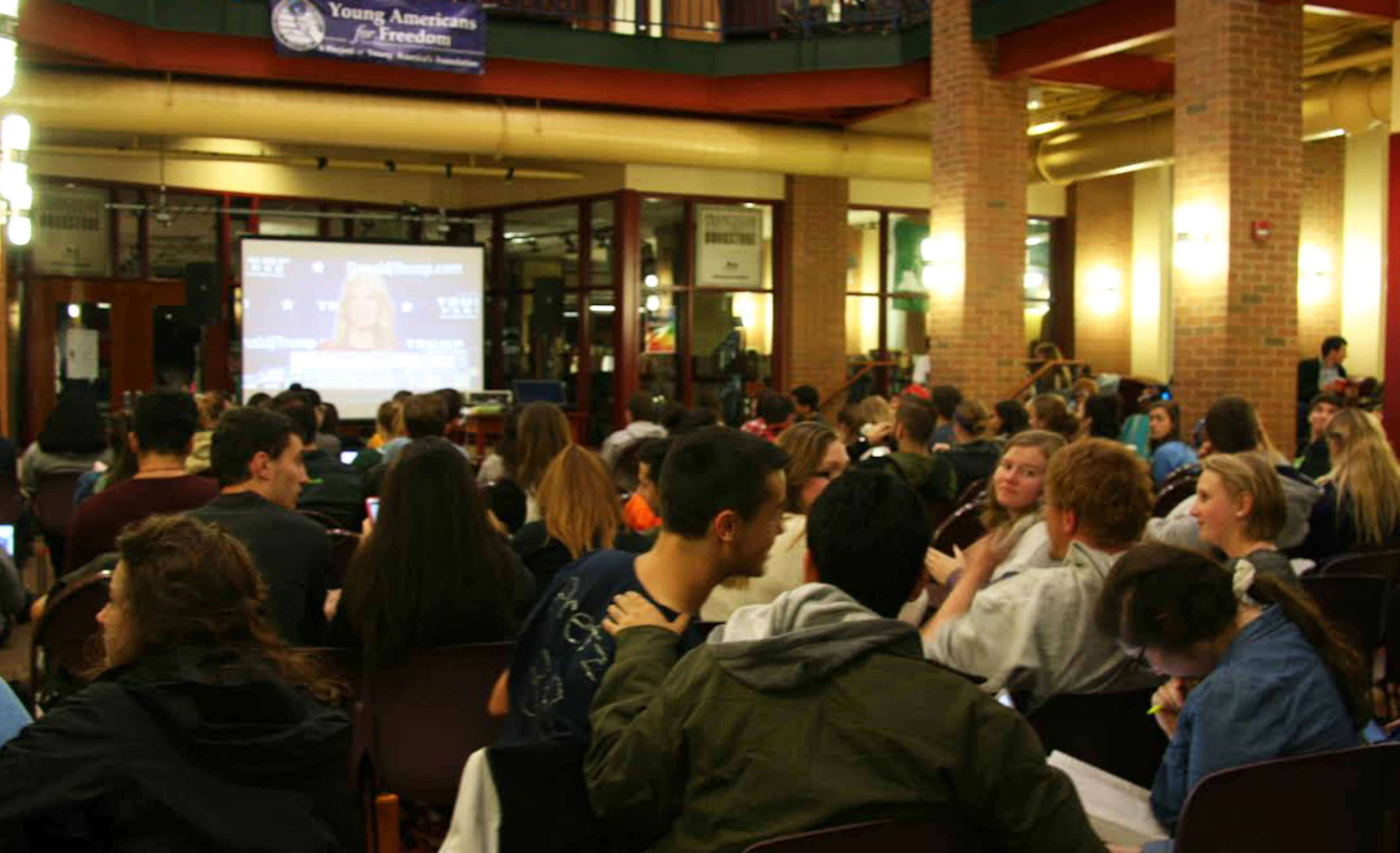 Donald Trump was elected President of the United States in an incredible upset victory this past Tuesday, defeating former Secretary of State Hillary Clinton.

Witnessing the event at Franciscan University were hundreds of students across campus, many of whom were gathered in the J.C. Williams Center at the election night watch party hosted by the Young Americans for Freedom club.

An estimated five hundred students made their way in to the J.C. at various points throughout the evening, enjoying refreshments while following Fox News live coverage of the election night results.

By the time the watch party started, Trump had already jumped out to a 23-3 lead over Clinton in the electoral college vote tally, with Indiana, Kentucky, and West Virginia being called for Trump and Vermont for Clinton. As students streamed in over the next hour or so, several of them talked about their feelings on the election and how they thought the evening would play out in terms of the presidential election.

Many thought that the decision came down to a choice between the lesser of two evils. As senior Stephen Shaw put it, they were left with two less-than-desirable candidates to choose from.

“Sec. Clinton poses a threat to national security,” said Shaw. “And Trump has a severe lack of experience that, combined with his behavior during the campaign, leads many to question his ability to hold the highest office (in America).”

Shaw voted for conservative independent Evan McMullin and was one of a few students who said that they voted for someone other than Trump or Clinton. Graduate student Tom Hornbeck also felt disappointed in both candidates and said that he voted for Michael Maturen, the American Solidarity Party’s nominee.

And while some Trump supporters only voted for him to avoid a victory by Clinton, others had specific reasons for their vote.  Freshman Anne Sweeney said that she was looking for the most pro-life candidate, and freshman Danny Bagely voted for Trump with potential openings on the Supreme Court in mind.

There was a mixed consensus as to who would come out on top when all was said and done, with some students saying that they thought Clinton would win despite having voted for Trump.  Freshman Genevieve Pinkowski said that she hoped Trump would win, but it looked like there was too much support for Clinton to allow a Trump victory.

“This was a pretty crappy election to have for my first,” she said with a laugh.

As more students streamed into the JC Williams Center, so did more election results.  While Trump continued to maintain a healthy lead over Clinton, most students who supported Trump didn’t get up their hopes up since many of the large states such as Ohio and California hadn’t submitted their results yet.

But the changing point in the attitude of the students seemed to come around 9:45 p.m. when Montana was called for Trump.  The entire floor of the JC erupted in cheers at the announcement.  And from then on, almost every state seemed to be going to Trump, including key swing states that had the potential to decide the election.

According to senior Tommy Valentine, president of the Young Americans for Freedom club, Trump was doing much better than he and many others expected.  Trump’s successes continued as the entire JC roared when the crucial swing state of Ohio, with its eighteen electoral votes, was called for him.

Freshman Peter Pinedo, who originally thought that Clinton would win, remarked that these new developments were “very exciting.”

At this point, many started believing that Trump would end up winning, and they all sat on the edge of their seats as they awaited the results from Florida, which had been too close to call.  Their belief was solidified even further when Fox called Florida and its twenty-nine electoral votes for Trump.

Soon enough, all eyes were on Pennsylvania and Michigan as the states that would be the ones that could push Trump over the 270-vote threshold required to win.

But students were not able to watch the final results in the JC, as it closed at midnight.  As soon as they were told to leave, students dispersed to common rooms all over campus to finish watching the results.  Many were still up and following coverage at 2:45 a.m., when Fox called Pennsylvania and the election for Trump, designating him the forty-fifth president-elect of the United States.

At this announcement, cheers and car horns could be heard all over campus.  Alumnus David Macdonald, who watched the results in the JC with hundreds of others, said that this result was, “absolutely surreal. It feels like it’s out of a movie or a dream.”

Even though he didn’t vote for Trump, freshman Anthony Batalla said that he remains optimistic about the country’s future.

“I have faith that our government, from that federal to the state level, will use logic and democracy to better our nation in any event,” said Batalla.

Freshman John Mayer summarized the election results, saying, “Trump may not have been the perfect candidate, but now that he’s in office, we need to hold both his feet and our feet to the fire, so that we can make this country truly great again, respecting all human beings and fighting for the right to life at all stages.”

2016-11-15
Previous Post: Drink and discuss seeks to bring out masculinity
Next Post: Students spend fall break campaigning for the unborn