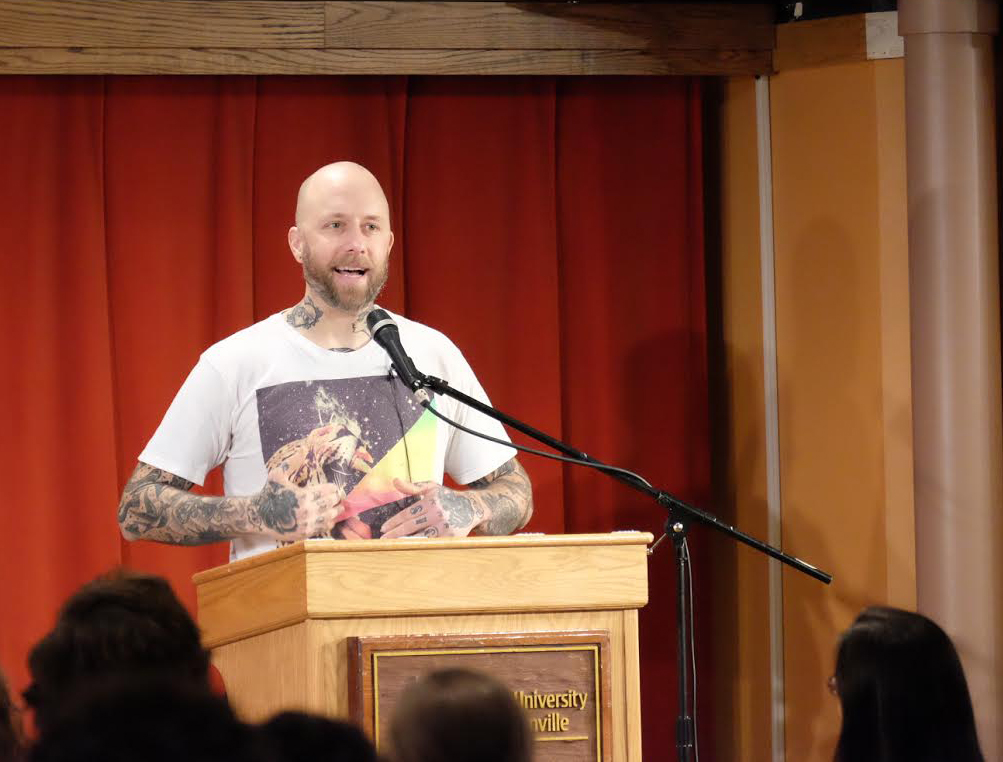 The 2017 Leadership Summit hosted in the Gentile Gallery on Jan. 21 offered students advice on how to lead with their faith clearly in mind using the past, present and future as their guides.

A capstone project put on by the Center for Leadership, the 2017 Leadership Summit lasted from 8 a.m. to 2:30 p.m. and was based around three talks given by Sister M. Johanna Paruch, FSGM, Stephen Giordano and Bob Lesnefsky. Using examples and sound advice, the speakers encouraged students to use examples from the past, pay attention in the present, and look toward the end goal in the future to prepare themselves in their faith journey.

The first talk was given by Paruch, who is an associate professor of theology at Franciscan University and who holds a doctorate in theology. Paruch talked about the role that the past has in leadership today and how leaders have the responsibility to blend aspects of the past with modern ideas to make them both more influential.

The author of the musical “Hamilton” did this well, said Paruch, because he blended history with modern music and made both more understandable and appealing.

Christian leaders, and all Christians, should look to the saints as their role models in history and work their example into their own leadership styles, Paruch said.

“Image our power as Christians to convert people to the Gospel,” said Paruch on the power of integrating Christian ideals into how a leader interacts with those they are leading.

The second talk of the day was given by Stephen Giordano, president and founder of Day One Group, an organization that works with leaders to pursue excellence. Giordano talked primarily about how to interact with others in the most productive, positive and constructive way.

Giordano said it is important to focus on the facts of what happened instead of your perception of what happened, especially when addressing others. Doing so will produce a more cooperative and understanding environment, and lead to more solutions, said Giordano.

Giordano illustrated this point by acting out a scene in which he arrived at the talk for a second time, but seemed to be late and unprepared. He then asked those in the audience to list what they perceived as happening and then the facts of what happened.

Giordano then explained how he could have explained the facts positively given the chance, and that because of this they should be what is expressed in conversation.

“Don’t have squirrel moments,” said Giordano. Giordano said “squirrel moments” are when the listener becomes suddenly distracted during a conversation and derails it, like a dog getting distracted by a squirrel.

The last talk of the summit was given by Bob Lesnefsky, director of Household Life at Franciscan University and founder of Dirty Vagabond Ministries. Lesnefsky spoke on how to lead with the future, which he said at the end of the day is death and eternity.

Lesnefsky introduced his talk as “Jesus can save you from the American Dream.”

Lesnefsky asked those present to think about what is most important to them, or what is their “ultimate thing.” This, Lesnefsky said, is what one chooses to spend the most time on and give the most effort to, which at the end of the day should be God.

Often everyone gets distracted from this goal by focusing on worldly things they wish to accomplish, even if these distractions can be goods, such as the “American dream,” said Lesnefsky.

Lesnefsky illustrated his point using a long piece of rope with a small portion taped at the end. He said that the rope is a person’s existence and the taped portion is that part spend on earth.

People often worry so much about the taped portion that he forgets to prepare for the rest of the rope, said Lesnefsky.

Lesnefsky said the eternal should be kept in mind and considered when making of every decision because it is what will matter more.

Lesnefsky ended his talk and the summit by asking those present to think about what role they want to say they played in the war of earthly life once they reach heaven, and how this will affect how they live their life.

Students who attended the talk said it was very helpful advice in their own lives.

“I thought over all that it was very insightful, it was a good reminder to bring every decision to prayer, even the ones that seem insignificant,” said junior Danna Hamilton, who is the coordinator of Gaudete in Via Crucis household.

The summit included breakfast and coffee, a break for Mass in Christ the King Chapel, time for independent lunch and a hot cocoa social. The summit was free and open to all students.

2017-02-03
Previous Post: Addition in the J.C. to help students realize dignity
Next Post: Franciscan University’s beloved friar passes away at 85