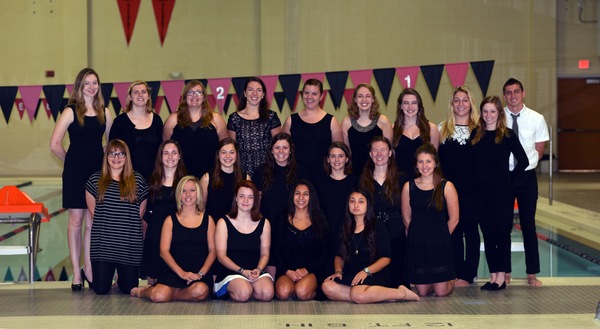 The Franciscan University women’s swim and dive team has accomplished much this year, stretching the girls both spiritually and physically as they formed a larger team bond over the course of the season.

The university swim and dive team had an exceptional season, taking fourth place in their conference finals. The team has shown outstanding improvement in comparison to the previous season, from coming in last place and receiving only 49 points to a high 282 points this year.

Head Coach Cassandra Pyle said, “Being able to work with the girls everyday is so rewarding, to just watch them grow in their events, in their personal lives, just being able to experience them in the joy that they bring into the sport.”

However, Pyle felt that the most challenging aspect of the sport was how isolated the team can feel because they are not able to have a presence on campus.

“It’s a sport where you don’t see us, we’re down at Big Red, you don’t know that we’re up at six, you don’t hear us chanting like the rugby team,” said Pyle. “We’re down there doing our thing and coming back, and have eaten breakfast and changed for the day before most kids have even gotten up.”

According to Elizabeth McNulty, junior and team captain, waking up at 5:30 every morning to then jump into a frigid pool is not the easiest sports commitment, but the team effort helps.

“The fact that we’re all doing it together forms a special bond,” said McNulty.

“We just see the best and worst days in each other because we spend so much time together every morning,” said McNulty.

As a third-year returner, McNulty described the team as a family.

“I would do anything for anyone on the team and I honestly feel like they would do the same for me,” said McNulty, “and that’s such an awesome mentality for a team to have for each other.”

Throughout her time at the university, McNulty has shown complete dedication to the swim team. McNulty said last season the team only had four girls, which would have been too small to compete, so she and her teammates took it upon themselves to recruit 12 new swimmers in a matter of one week.

“(Elizabeth) is a phenomenal leader,” said Pyle. “She is the most gifted, fun-loving person and she’s always pushing everyone to do better. She’s not somebody who is so good that she sees herself as above others, she’s right there with everybody else.”

Freshman swimmer Victoria Marshall found that the most rewarding aspect of the sport was the strong friendships she was able to build throughout the season.

“We’re all friends with each other,” said Marshall. “It’s very much about holding people up before and after their event, whether they did good or bad.”

“We all stand at the end of the lane and just scream our lungs out for whoever’s racing,” said McNulty.

Because swimming is such an individualistic sport, the girls make a conscious effort to really encourage each other as they know how mentally challenging a race can be.

“The sport is different than playing soccer or lacrosse or another team sport in the fact that you’re always competing with yourself,” said Pyle.

All the encouragement seemed to help freshman swimmer Rachel Solomon, who at finals was able to drop 12 seconds in her 100 meter fly.

Pyle said the girls do “Secret Sisters” throughout season (an exchange of little notes and gifts) in order to encourage each other. They also have accountability buddies during the month leading up to championships to help them stay focused and do their best.

The team also relies on spiritual support with morning prayers, team Masses and 15-minute adoration in the Portiuncula before leaving for each meet.

Junior captain Abby Commarford also made an effort to read a scripture passage to the team each week, which she would then relate to swimming.

Reflecting on the past two seasons, Pyle spoke of her plans for next season.