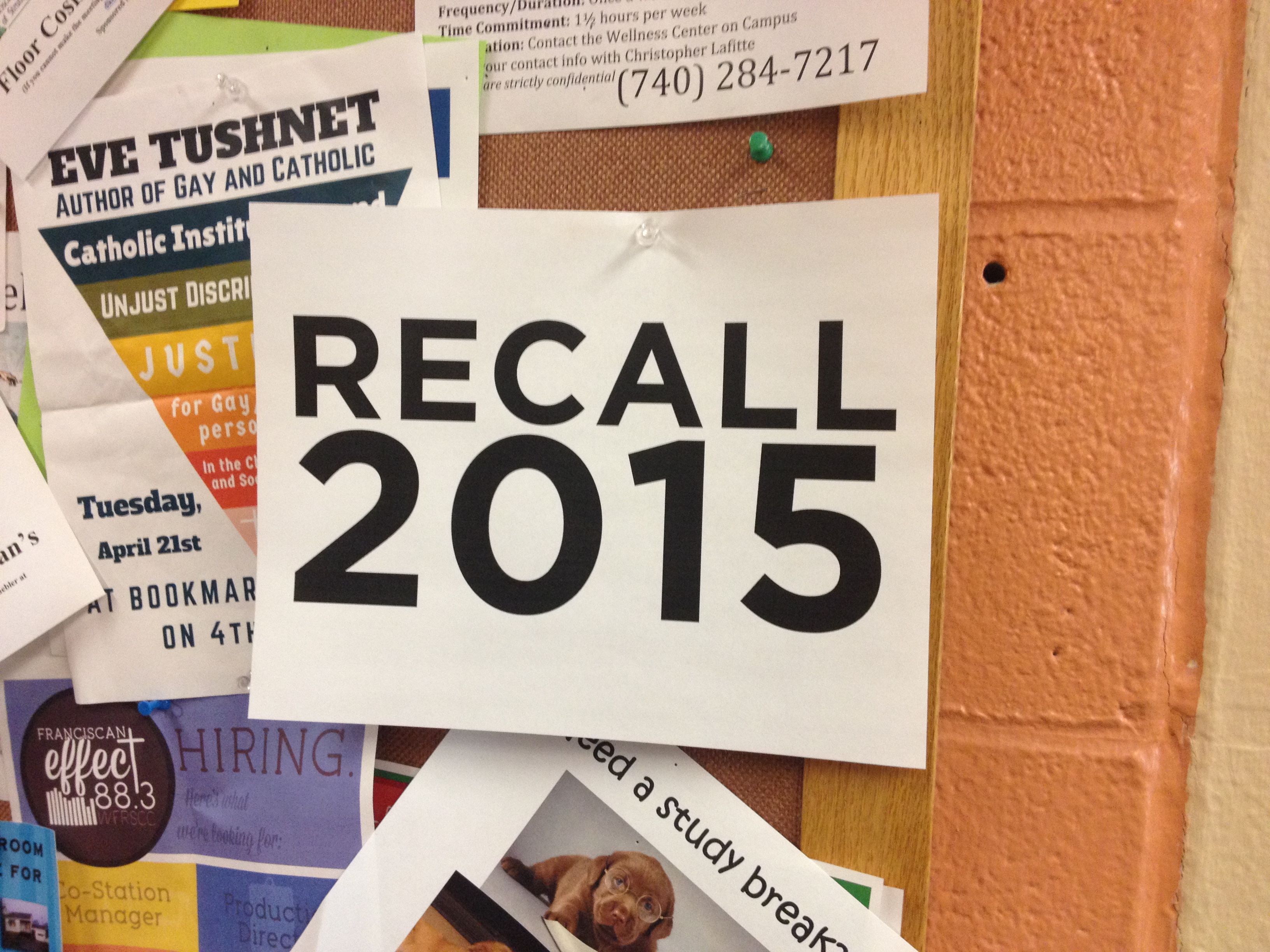 In an official statement, Thomas Gaudet, chief justice of Student Government’s supreme court, said he made the decision to disqualify Drew Pultorak and Joe Dantona because of “gross and willing infractions of the election code” and that the decision “was made with great hesitance, reluctance and regret after hours of difficult deliberation and discussion.”

According to the bylaws of Student Government, “all materials must be in good taste in compliance with university policy” and “no campaign materials or campaigning shall be allowed on or in the building housing the ballot box on election day.”

In a written interview, Gaudet said that he warned the candidates multiple times about having fliers in prohibited areas and that he found “countless pieces of campaign materials” around the J.C. Williams Center on election day – including fliers that named a member of the student body and a candidate in a negative light.

“This was explicitly prohibited at our candidates meeting a week prior to the election and smear campaigns/negative attack ads will not be tolerated,” continued Gaudet. “Overall, the bylaws stipulate that fines may be levied against candidates for these infractions, however, they surpassed $200 in the case of these candidates. The bylaws state that in cases of gross and willing infractions they may be disqualified.”

Pultorak said that he and Dantona were not aware that they had broken any bylaws.

“In the morning, we got here at 8 a.m. and we had until 9:30 to take down all the fliers … we were working to make sure everything was out,” said Pultorak. He continued that they had one thousand business cards in circulation that he believed some people may have accidentally taken into the J.C. on election day. “I don’t know how that can be willful,” he said.

Pultorak said that he called Gaudet to inform him of other candidates’ posters still hanging in the J.C. past the allotted time. Pultorak also said that no action has been taken against them.

In his official statement regarding the election, Pultorak wrote that after he was asleep on the night of the election, he was woken up by a call from Gaudet asking him to come to the J.C. as soon as possible because it could not wait.

“As I walked in the room, they all seemed upset and informed me that because of ‘campaign dishonesty’ and that flyers that were still in illegal location, we would be disqualified from the race and removed from the Austrian ballot,” wrote Pultorak. “It was not a trial, but I was found guilty before I had the chance to prove myself innocent. Even though I was able to explain certain things they saw as ‘dishonest’ they were not willing to change their position.”

He continued that there was no unified argument, just two complaints that did not seem serious enough to constitute dismissal. One complaint was filed by Brian Kirby, current president of Student Government. The author of the other complaint was not disclosed.

“The complaint was that my list of endorsements was dishonest,” said Pultorak, in his statement. “Everyone on the list agreed to support us and I have witnesses who can attest to this. The second was for 20+ fliers that were in illegal locations. I was not aware of these. The Chief Justice had texted me earlier in the week once about some fliers, and we removed the ones that we found immediately.”

In an interview, Pultorak said, “I really think … Kirby was afraid that we were going to win because he knew the numbers because he was in there talking to the justices. He’s the one that filed the complaint, and he’s the one that followed through on everything and really made sure that we got disqualified.”

Megan Tucker, sophomore senator and chair of the rules and order committee, did not agree with the final decision made by the supreme court.

“(T)he by-laws of student government state infractions must be of a ‘gross and willing’ nature in order to be considered for disqualification,” she stated in a written interview. “I do not agree with this decision as chair of the rules and order committee because I did not find the complaints and evidence presented or lack thereof ‘gross and willing.’”

Daniel Smith, who ran for junior senator in this election, said that he fully supports the actions taken against Pultorak and Dantona. Smith said he originally endorsed Pultorak within 48 hours of the announcement that Pultorak would be running for president.

“I have been disappointed by it all,” said Smith. “I don’t think there is really a need to get dirty in Student Government politics. There are so many different things that we could be doing with our time as opposed to creating campaign fliers and slogans that go after another person’s character.”

Kirby also voiced his support for the final decision in a written interview: “I fully support all actions taken by Chief Justice Tom Gaudet during this very difficult election process. Tom has served with dedication and I have great respect and appreciation for the work he has done.”

After the announcement was made concerning the disqualification of Pultorak and Dantona, the student body expressed its concerns on Facebook while other students took action.

Franciscan University student Ryan Adams spent the majority of Friday collecting signatures from the student body to petition Student Government to request a recall election with all of the candidates on the ballot once more.

“We do not agree that the disqualification of Andrew Pultorak and Joseph Dantona was justified,” said Adams, in a written interview. “It appears to me to be a clear conflict of interest for one of only two formal complaints to come from someone in a position of authority who has given his support to an opposing candidate.”

He continued, “That aside, it does not appear that Pultorak and Dantona were treated fairly, in fact the disqualification proceedings may not have even followed the Student Government bylaws. As such we ask that a new election be held to better represent the student body.”

Ben Stroka, president-elect of student government who won 56 percent of the student vote, urged the students to refer to Gaudet’s official statement concerning the event.

“I think it is unfortunate that infractions were made by Pultorak’s campaign,” said Stroka. “I wish it didn’t have to come to stuff like this. So it is unfortunate, but I am excited to see what me and Christian will bring forward to the table next year.”

He affirmed that Student Government followed all of the proper procedures despite what other rumors may be circulating: “Obviously there has been a lot of conflict on Facebook; there have been some minor protests here and there, but … I hope at least the student body can get over this and reunite again.”

Stroka said that he heard about the complaints filed against Pultorak-Dantona, but that he “can’t say who made those allegations whether I know who did it or not.”

He said that his campaign followed the bylaws to the letter and that the student body should “trust student government; trust the faculty and the administration at Franciscan.”

“(W)e went out of our way several times to uncover other people’s posters,” she said. “I mean, it seemed to us that we were running a completely honest campaign.”

She said that on election night Pultorak and Dantona were called out of bed at 11 p.m. to come to the J.C. where they were informed of their disqualification because they had “supposedly run a negative and malicious campaign.”

Finger said that it was not proper procedural action to make this decision “in the middle of the night without a lot of people’s knowledge and approval.”

She said that right now it is not about winning the election for Pultorak and Dantona: “Right now it is about clearing someone’s name because it is not just that their names have been dragged through the mud in this way when it is not founded on anything legitimate.”

In his written interview, Gaudet commented on the actions taken by the student body: “I am also saddened to see the complete lack of respect for Student Government coming from people who are jumping to false conclusions, making judgments, and frankly being uncharitable. I hope that people realize how hurtful this entire process has been to not only me personally but to all those involved.”

While some students signed petitions and hung signs on campus with the words “Recall 2015,” many students took to Facebook to express their concerns about the situation. Many hashtags were used throughout the day following the announcements including: #Recall2015, #ImpeachKirby and #DealWithIt2015.

On the “Vote Pultorak for Franciscan Student President” page, Joshua Lee Thérèse McKenna said that item IV.B.2.b of the bylaws “seems elastic enough for the justices to act against a candidate solely according to their discretion.”

The talk began on “Overheard at Franciscan,” a public Facebook group for Franciscan students where the word spread rapidly.

“Having not lived on campus for a good while, I had no idea anything like this was happening,” wrote Nate Richards, “but it’s good to see students taking a widespread opinion on issues with higher-ups.”

Annie Babcock also commented on Overheard. “If one gets disqualified for breaking rules and Pultorak/Dantona got disqualified, then we can logically conclude that they broke the rules,” she wrote.

On its Facebook page, Student Government told students that any questions should be brought in-person to Chief Justice Gaudet.