The man among the masks 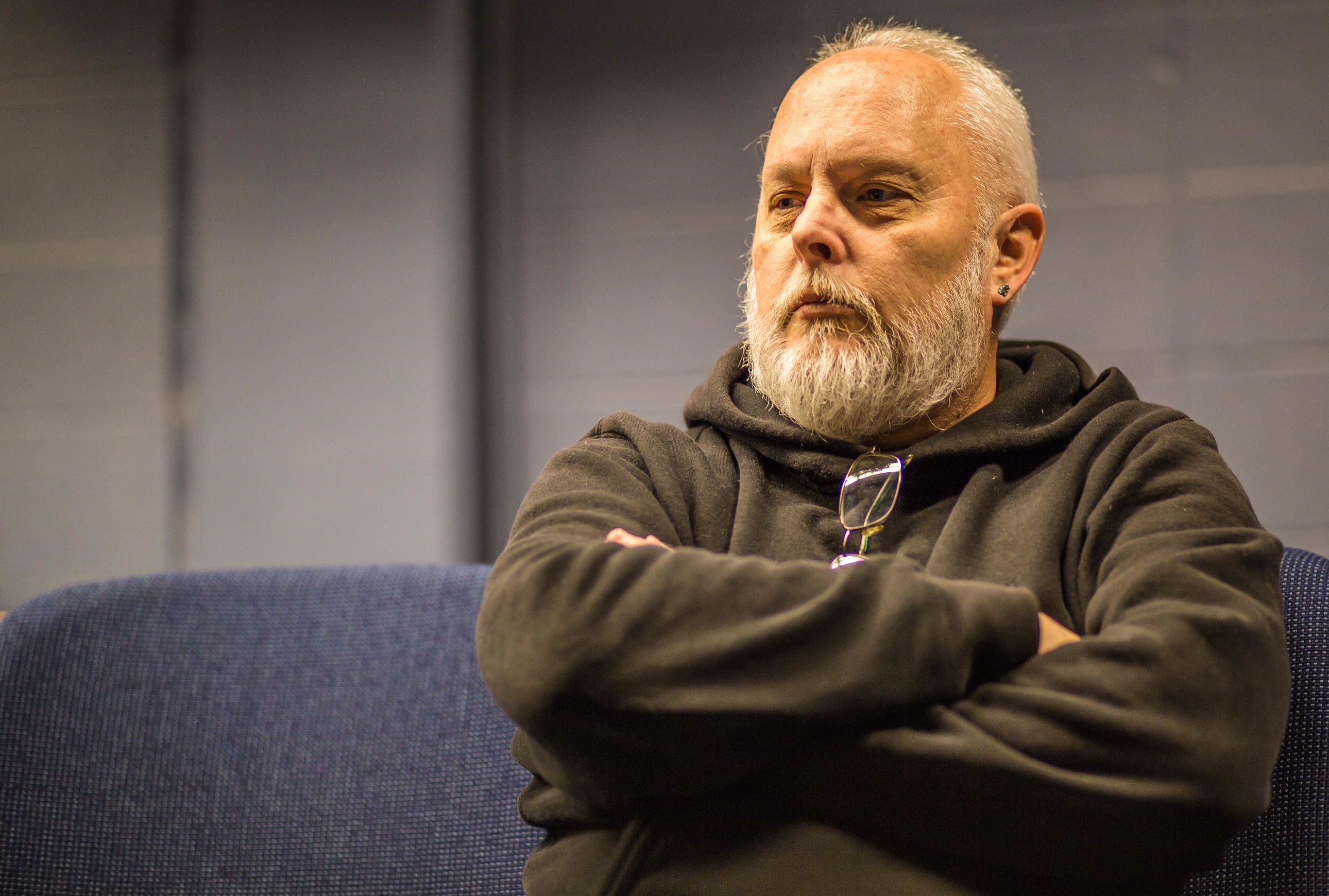 The last time his computer contracted a virus, it was in Arabic. He finished his law degree in the Netherlands. He can fashion chair coverings from sheep’s wool. He assigns computer games for homework. And though he may very well be the most interesting man on Franciscan’s campus, one defining characteristic outweighs all others.

Dale Prey, Anathan Theatre manager and technical director, does not want to be remembered.

“That’s not really the goal,” said Prey. “There are some really well-known, established professors at this institution,” he said, citing established individuals like Scott Hahn, who holds a doctorate in systematic theology. “Each class has a slightly different goal, but I’m not what they should remember.”

Tucked away in the Egan Hall costume shop, a space equal parts controlled chaos and haphazard trove, Prey works. He constructs by hand the Drama Department’s latest costumes and props, behind a nondescript door protecting the Drama Department’s many treasures: among them a working Darth Vader mask, lemon juice from concentrate, plastic swords, angel wings, costumes of performances past and enough untethered rope and string to bind all but Prey’s own personality.

Perhaps the greatest treasure the Drama Department possesses is the man himself, although the part-professor, part-manager, part-director, part well-informed lover of research would be the last to support such an attitude. “I prefer to be in the background,” he said. “I’d much rather be anonymous.”

Said Prey, “I’ve lived a fairly interesting life. I’ve lived many lives. And I’ve always had an interest in theatre.” This interest was fostered at the University of California, San Diego, to which Prey credits with acquired employment at the Scripps Institution of Oceanography. This was where he discovered a drive for hands-on learning which far outweighed a necessity for class attendance.

Unrealized or not, Prey exists in a niche all but made for a man of his ingenuity. “I always tell people that this is the longest I’ve ever done anything without getting bored,” said Prey. “Every semester, we have a new production, a new show.” Like always, this semester’s upcoming performance of “The Crucible” will send him back to his books, this time in an effort to familiarize himself with a culture unique to 17th century Massachusetts.

An academic placement in Steubenville, which Prey describes as a complete “fluke,” came about when Prey came on as a temporary replacement during the sabbatical of Monica Anderson, who holds a doctorate in theatre. His presence 16 years later has students nevertheless thankful; Prey’s impact is enhanced by a unique spiritual perspective, one he’s never afraid to discuss.

“I’m not Catholic,” said Prey. “It’s a fact I often bring up in my classes. Everything I know about Catholicism, I learn from watching (students).” His self-described outlook “outside” of traditional Catholic spheres makes for curriculums and for teaching opportunities unique in both application, often dedicated to dispelling perceived misconceptions.

“Computer games are not necessarily evil,” said Prey, with a knowing smile. This semester marks the first characterized by his “The Survival Genre: Important Lessons Encapsulated in Literature, Film and Interactive Media” class, an upper-level course dedicated not only toward the development of survival as genre, but toward its investigation in commercial material, anything from Robinson Crusoe to role-playing computer game Darklands.

“We trace the survival crafting genre, starting with Odysseus, going through some of the novels of the 1960s, moving into film and then how we see those ideas in some computer games,” said Prey, describing his class two years in the making. His syllabus looks largely to provide those otherwise dismissive of computer games with enough evidence to perceive the benefits for themselves.

Class after class, production after production, Prey remains in the background, solely by choice. He doesn’t know what drove him to Franciscan, and he can’t say how long he’ll remain onsite. He won’t even go so far as to admit to his own importance, despite a readily identifiable, underlying joy.

Amid so many intangibles, one fact remains – tucked inside the Egan Hall costume shop, between last semester’s costumes, among spools of cord, tape measures, closets on wheels and entire boxes of dusty props only he can identify, Prey is prepared to take another semester as it comes. He’s never admitted that this is where he truly feels at home. He’s never had to.

2018-02-05
Previous Post: Catholic Values: Ascending the mountain of the pro-life movement
Next Post: Altoona proves too much for Franciscan down the stretch