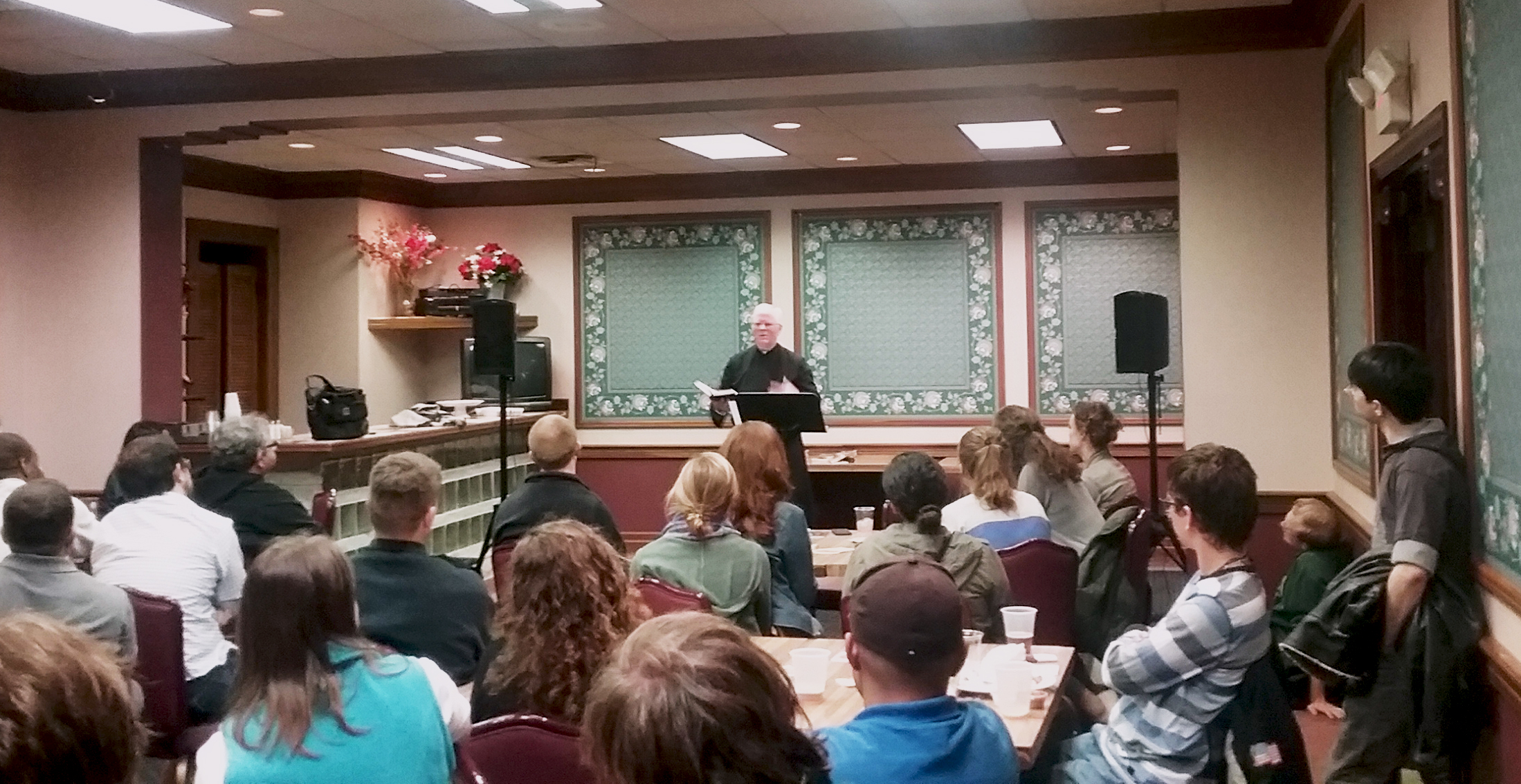 A visiting priest opened the eyes of students gathered at Froehlich’s on Oct. 19 as he shared the importance of our guardian angels, pulling from biblical sources.

The guest speaker was the Rev. William Wagner, OA. Wagner studied in Rome and taught in Portugal for 10 years. The talk tonight was on angels.

Wagner began his talk focusing on stories of angels in the Old Testament and stories from more recent times, such as World War II.

“We have never done anything in our lives without our guardian angel,” said Wagner.

Pulling from examples, especially of the story of Raphael and Tobias in the book of Tobit, Wagner said, “This is not just about the relationship between Tobias and Raphael; it’s also the story of our relationship with the angels.”

Wagner told the story of Tobias, focusing first on the cry of both Tobit and Sarah to God for aid, which shows our human tendency to cry for God in our distress.

“People struggle and wrestle with God; then finally they achieve holiness,” said Wagner.

Wagner pointed out that when Raphael spoke to Tobias about being a fellow Israelite, he was telling the truth because both men and angels worship God.

Wagner also revealed that the story of Raphael and Tobias is proof that our guardian angels will always be there, even when no one else is.

“The only one who will always be with you throughout your life (is) your guardian angel,” said Wagner.

Kate Greenhalgh, a senior theology major, said, “I came because I love the topic of angels, but also because it’s really cool that they have a program for 20s and 30-year-olds.”

“I loved how he compared Raphael with your guardian angel and how much you’re in it together, in the spiritual sense,” said Greenhalgh.

Jacob Konkolics, senior, said “I really liked the environment; the majority of the people here are grad students, and they are a really cool crowd.”

“I love storytelling,” said Konkolics. “(Wagner) grasped my attention, and he told the story, relating the importance of our relationship to the angels and saints.”

“Everyone walked away knowing so much more about the angels because (Wagner) told a great story,” said Konkolics.