To repeal or not to repeal? 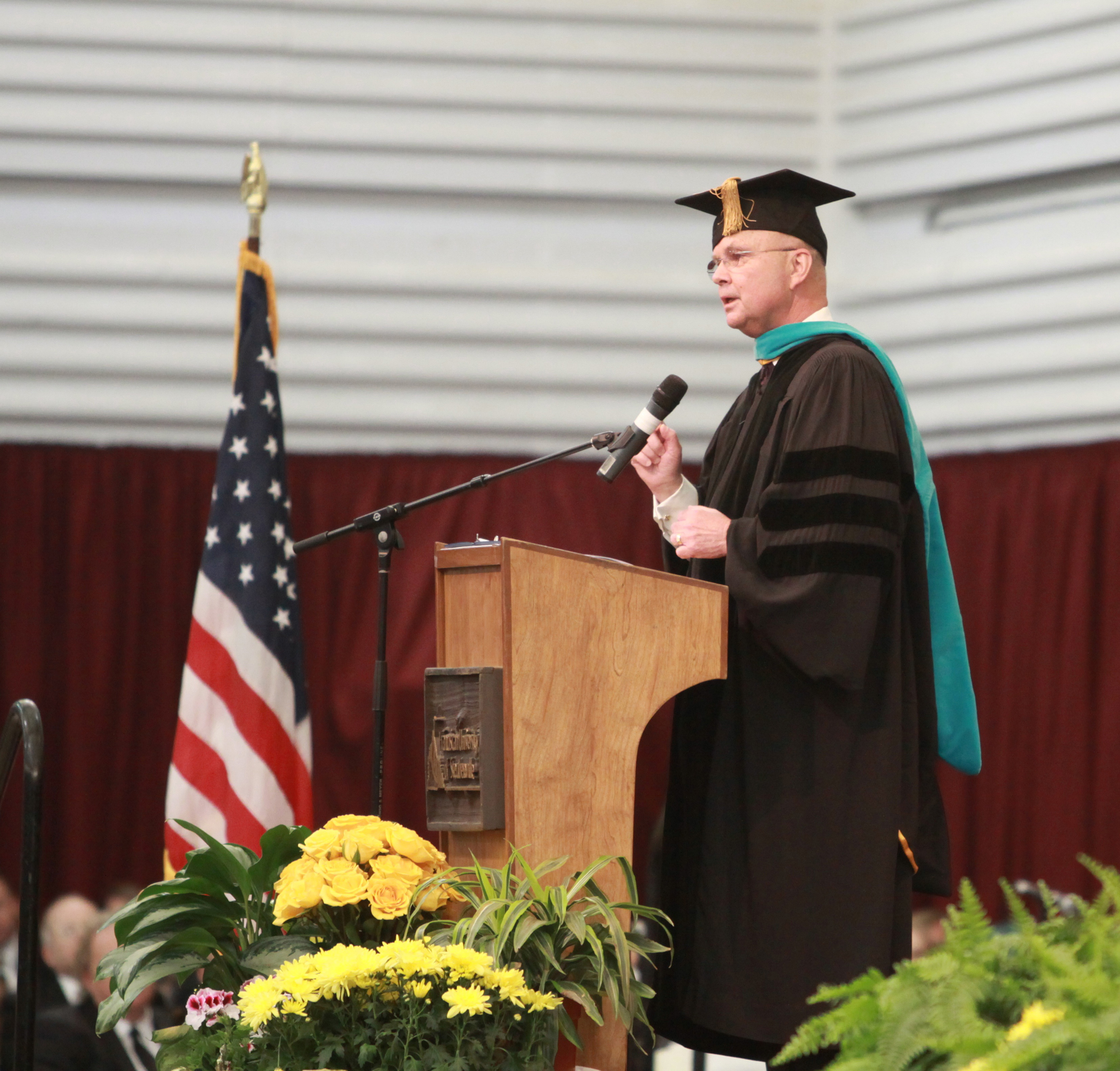 Students for a Fair Society has written a petition asking Franciscan University of Steubenville to rescind an honorary degree conferred on a former director of the CIA, due to moral and ethical concerns.

Students for a Fair Society’s (SFS) petition, “Rescind Michael Hayden’s Honorary Doctorate,” was published Dec. 10, 2014, on www.change.org in light of a recent Senate report on the CIA’s torture procedures.

In its petition, SFS denounced Franciscan for scandal and inconsistencies with the Catholic faith for supporting retired Gen. Michael V. Hayden and the actions of the CIA, which was under his directorship from 2006 to 2009.

Part of the petition states: “By conferring an honorary doctorate upon Michael Hayden, a man who has promoted torturous activity, the type of activity that resulted in the death of at least one person and contributed to the permanent psychological damage of those detainees, it seems the University has promoted sinful activity and the occasions thereof, i.e. scandal.”

Joseph Antoniello, spokesman for Students for a Fair Society, said, “This needs to be addressed by the university. While (Hayden) himself did not probably personally torture anyone, his support of it was why we wrote the petition.”

In a nut shell

Franciscan University conferred the honorary doctorate in public administration on Hayden at its commencement exercises in May 2012.

At this time, there was not much discussion surrounding Hayden or questions of the university’s actions, aside from an email correspondence between SFS and the university in regards to why Hayden was honored.

On Dec. 9, 2014, the Senate Select Intelligence Committee released its torture reports on the past 13 years of the CIA’s programs in their secret prisons.

The investigation of the CIA’s secret interrogations of terrorism suspects revealed “brutal and dishonest” reports on the CIA’s part, according to a Washington Post article published Dec. 9.

The one death by torture mentioned in the petition and detailed in the Senate report occurred in 2002.

Following the report, Hayden was spotlighted in the media and accused of providing misleading and false information of the CIA’s actions.

The question of the honorary degree resurfaced for SFS and the Franciscan community with varied responses.

In 2012, Keith Michael Estrada, founder of SFS and 2013 Franciscan alumnus, sent an email to Tom Sofio, associate director of Marketing and Communications at Franciscan, questioning the prudence of the university’s actions, Estrada said.

“If the torture (Hayden) was publicly defending at the time,” Estrada said, “is the same torture, legal or illegal, that we Catholics call intrinsically evil, this alone seemed reason enough to step back from such a decision.”

Sofio sent a response via email on behalf of the university, stating: “Franciscan University is honoring General Hayden for his service to the country that he loves and served so selflessly, for protecting our way of life and protecting us from those who would want to harm us, for service in defense of innocent human life, which is part of the military’s mission, and for his message of unselfish service to others he will deliver to the Class of 2012.”

SFS took no further action in 2012 except conversing individually with faculty and students about the issue.

In 2014, the information from the Senate reports rekindled the question for SFS of whether Franciscan should have honored Hayden with a degree.

“That was the impetus for our action with the petition,” Antoniello said.

SFS decided that because there was now documentation of the CIA’s actions from the Senate report, it was the best time to write a petition, he added.

Antoniello said SFS deferred to Church documents as the authority on the matter.

The petition cites Pope Emeritus Benedict XVI and the USCCB on the intrinsic evil of torture and the call to refrain from any punishment that would compromise the human dignity of prisoners.

“Our hope is that the degree be rescinded because there’s such an outcry by Catholic people to hold all public officials accountable for their actions,” Antoniello said.

On Dec. 17, 2014, Franciscan University wrote an official statement expressing its pro-life stance in response to public debate and speculation generated by the Senate report.

It states, “The political infighting generated by the report is ongoing, and only time will tell what the full truth is surrounding this situation.”

Quoting church documents about the infamies of violating the integrity of the human person through mutilation, torments or coercion, the university restated its mission to remain in solidarity with church teaching.

“As always,” it states, “Franciscan University of Steubenville stands with the Catholic Church in affirming the sanctity and integrity of all human life.”

The document noted that Franciscan has taken an active, public stance on integrating Catholic teachings on pro-life principles throughout its curriculum and academic disciplines.

The statement ended with the intent to seek new and better ways in responding to the sanctity of human life upheld by the university’s patron, St. Francis of Assisi, and the Catholic Church.

Sofio said, “Franciscan University remains unapologetically committed to the pro-life principles that are expressed in our statement.”

The document, titled “The Sanctity of Human Life,” was not publicly circulated, but is used as a statement for inquiries and is available upon request, Sofio said.

When asked for further commentary on the statement, Sofio said, “This issue has become politicized with multiple opinions across the spectrum.  The university is focused on moving forward in a positive fashion and to that end, we will be hosting a discussion on torture and the teachings of the church sometime in the spring.  In addition, we are not going to be drawn into the politics of this issue; our focus will continue to be on the core teachings of the Catholic Church.”

Antoniello said SFS plans to close the petition soon and present a hard copy with the signatures and comments to the Rev. President Sean Sheridan, TOR.

“We pray that (Sheridan) doesn’t do anything as a political move and that he works as he is, a faithful son of the church,” Antoniello said.

Among the Franciscan University community and beyond, the responses to the petition have varied.

Online in the comments section of the petition, Scarlet Biberstein from Downey, California, wrote she was ashamed to call Franciscan her alma mater.

Tim Shipe from West Melbourne, Florida, wrote: “Rescinding the Honorary Doctorate may be asking too much but at minimum Franciscan University should distance themselves from this full embrace of the CIA’s leadership by making clear the Catholic teachings on torture and the universal common good.”

On campus, Tommy Valentine, sophomore and president of Young Americans for Freedom (YAF), expressed his personal views on the issue, though he did not speak on behalf of YAF’s members.

“We need to be careful,” Valentine said, “because I think the effect of this petition is basically to accuse (Hayden) of war crimes, crimes against humanity.”

Valentine did not think this could be properly addressed by a petition.

He said SFS has a legitimate concern. However, the issue at hand is not as black and white as it has been made out to be.

If the degree were revoked, Hayden would be accused of war crimes, Valentine said. If it were kept, Franciscan could be seen as condoning torture.

Patrick Lee, who holds a doctorate in philosophy and is the director of the Veritas Center for Bioethics and a philosophy professor at the university, expressed the same concern about the nuances of the issue.

He said there did not seem to be good evidence of Hayden’s authorization of or complicity with the reported torture and to accuse him without that evidence would be calumny.

“Torture is gravely evil,” Lee said. “But calumny is objectively wrong also, though not as gravely wrong as torture.”

Valentine said, in spite of the Senate report, not all the facts are clear about Hayden.

“I’m just personally very hesitant to make a judgment when it concerns (Hayden’s) soul,” Valentine said. “That’s on his conscience.”

Lee added that while torture is intrinsically and morally evil, there are some acts that are clearly torture, some that are not, and some about which there is still reasonable disagreement.

He defines torture as intentionally physically mutilating or destroying the prisoner’s self-integration.

The talk or panel discussion on torture to be held this semester will be sponsored by the Veritas Center for Bioethics and the theology department, Sofio said.