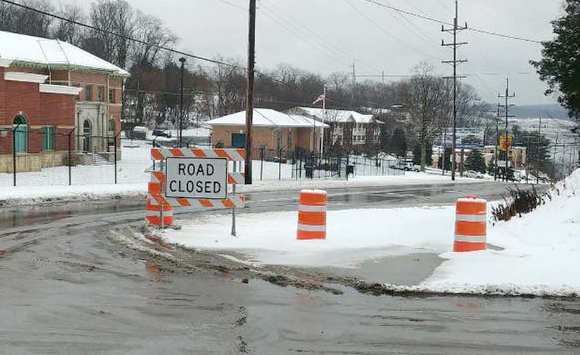 The answer is probably clearer than the solution.

Franciscan University and the residents of the city of Steubenville have both been subjected to more water breaks than perhaps desired. These water breaks shut down the school twice: the first time in the fall and the second in January, a week before the semester began.

The leak in January was particularly bad, flooding all of University Boulevard and icing it over as the Steubenville Water Department worked to find the cause.

Some of the breaks have been easier to deal with than others, according to Joe McGurn, the director of Physical Plant.

“Our own experience on campus when we’ve had breaks (has been that) it depends on where the break is and how easy it is to get to it,” said McGurn.

Concerning the break which flooded University Boulevard, McGurn said, “I think the trouble was getting it isolated and shut off.”

“In that section, the line is fed in two directions,” said McGurn, explaining that one is fed to the water tower, and the other to what is known as the “tear well” at the filtration. “So isolating that break took longer than anyone desired,” said McGurn.

Utility Director Chuck Murphy elaborated on the break which took place in January, flooding University Boulevard and making access to the university almost impossible. The line break on the golf course required a 10-12 foot piece of pipe to be replaced, said Murphy. The line sloped downhill, which was the cause of the flood. “It took the water tower on the hill from 20 feet of water to seven,” said Murphy.

It also drained some of the sister tower, Raybell. “It was an extremely significant leak,” said Murphy. “We put in a new piece, working around the clock all night.”

These breaks have not just affected the students and staff at the university, but various breaks have caused havoc in the downtown Steubenville area, the newest break only just happening on Friday near Sunset Boulevard.

“We’ve not physically seen the break, but we’ve seen the result,” said Murphy. During some of the breaks, the pressure of the water has been measured at 200 gallons per minute, but when the valve was opened, it was found to be over 213 gallons per minute.

The only fixture now for the crew is to replace the valve and close it up.

“That would allow us to close up the brand new 20-inch valve, then the break would no longer leak,” said Murphy.

Both McGurn and Murphy believe that it is not necessarily weather related, but age related, some of the pipes being close to 80-years-old.

“To say it’s weather-related, it’s probably not,” said McGurn. “It’s probably just age. The pipes have reached that age, and it’s just that time,” said Murphy. “Just like the human body doesn’t work as well in your 40s and 50s as it did when you were young, the pipes have a life expectancy, and then they expire.”

Murphy said the Steubenville City Council is looking forward to replacing the pipes throughout the city, but it’s a slow process because of the massive endeavor.

“There are 76 miles of pipe in Steubenville,” said Murphy. “(So) we are trying to do our best – even before these leaks came up, and we will continue to do our best even if need be around the clock.”

Murphy said the first priority of the department is the public’s health and safety in the event of a breakage.

“We go from the most critical, such as hospitals, nursing homes and schools, making sure they have water, to the least critical,” said Murphy.

McGurn explained the hard work that goes into these intense experiences of leaking with water pipes breaking and keeping the city with water.

“The city always gets fingers pointed at them,” said McGurn. “I personally know those guys who’ve been working 12 hours shifts around the clock in very, very cold weather, and working in intensive water, they really deserve our accommodation.”