Visiting bishop speaks of hope and fortitude on election night 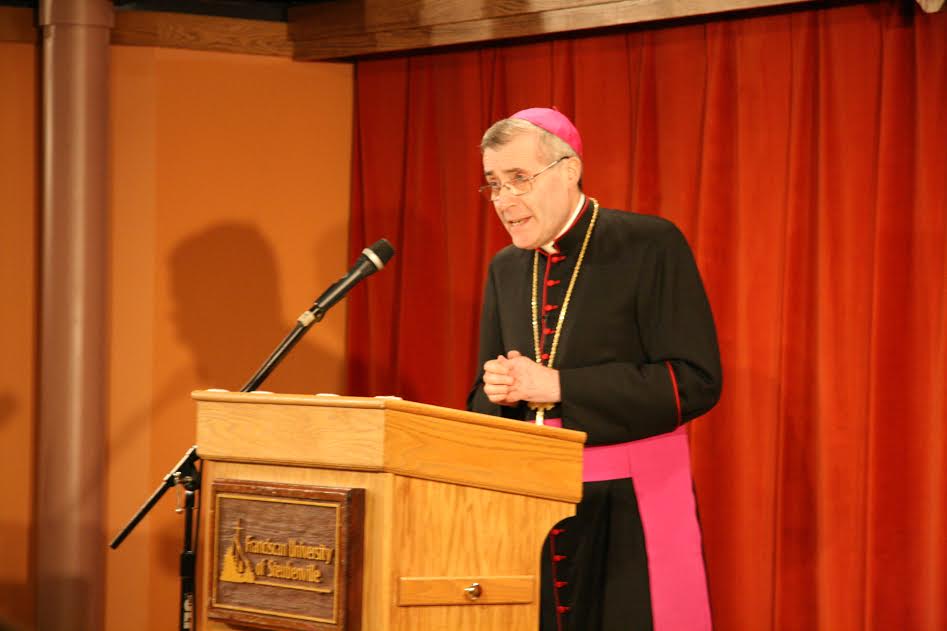 The Rt. Rev. Mark Davies, Bishop of Shrewsbury, England, gave a talk entitled “The Real Victory to Be Won” at the Gentile Gallery on Tuesday, Nov. 8.

“What is an Englishman doing here on the night of an American election?” he asked to begin his lecture. He answered with his intent to offer a Catholic perspective.

“I will mention only one politician tonight,” he added, “Winston Churchill…who could offer his people only a grievous victory…” He went on to quote Churchill’s address to the British people on the eve of World War II: “We are fighting for nothing less than the survival of Christian civilization.”

Bishop Davies’ message was one of hope and consolation, even in the face of the ugly conflict of values in the Western world which threatens to only get uglier. He quoted St. Paul’s exhortation to the Philippians: “Let all men know your forbearance. The Lord is at hand” (Phil. 4:5-15).

“(This passage) gives us our whole Catholic perspective of history…which sustained the Catholic people of my country through three centuries of persecution, even unto death,” he said.

Davies said that he was prompted to make this speech in response to proposed bills that would legalize euthanasia in Great Britain. He described England as an increasingly secular country where agnostics and atheists outnumber self-proclaimed Christians and “religion…is a private luxury.” He sees a similar situation developing in the United States.

But Davies encouraged his audience to keep up their courage. “(History) will have no end but the reign of Christ…the Church has survived tyrants and (evil) ideologies.”

Davies went on to describe in brief how the Catholic Church, an integral part of English society throughout the Middle Ages, was almost uprooted by Henry VIII and persecuted, sometimes to the point of martyrdom, until three centuries later when the gory excesses of the French Revolution turned the British back to the faith.