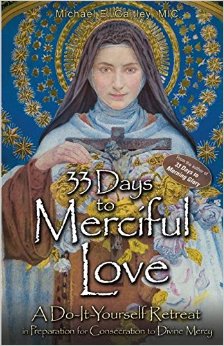 While many Franciscan University students can be seen with the book “33 Days to Morning Glory,” a new work has emerged that is preparing these students and all Catholics to consecrate themselves to Divine Mercy.

The Rev. Michael Gaitley, MIC, a popular speaker and writer, is known for his do-it-yourself retreat as a preparation for the Marian consecration found in his well-known book, “33 Days to Morning Glory.”

Now Gaitley has come out with a new book promoting the Divine Mercy. Titled “33 Days to Merciful Love,” this latest effort of Gaitley’s is a preparation for consecration to Divine Mercy.

“‘33 Days to Morning Glory’ is a book that prepares us to consecrate ourselves to Mary, so she can, in fact, bring us to that fountain (of mercy),” wrote Gaitley.

Gaitley continued, “This book, on the other hand … is about drinking from that fountain. And while we can get to the Fountain of Mercy without making a Marian consecration, such a consecration enables us to drink from it so much more deeply and easily.”

Murphy also said there is a similar pattern in the structure of the two books but a different focus.

Organized almost exactly like “33 Days to Morning Glory,” “33 Days to Merciful Love” consists of daily reflections and prayers, focusing mainly on the writing of St. Thérèse of Lisieux, as well as some meditations of St. Faustina, the foundress of the devotion to Divine Mercy.

Students at Franciscan have jumped enthusiastically into Gaitley’s new book.

Elizabeth Philipps, a senior theology and catechetics major, said, “I really love everything that Fr. Gaitley writes, so I was really excited when he came out with this one.”

Philipps said that although the structure of Gaitley’s books on Marian consecration and on Divine Mercy is similar, there are some differences.

The book also states that the main focus of “33 Days to Merciful Love” is on the writings and life of St. Thérèse, especially her Little Way.

In his book, Gaitley writes, “Therese’s Offering to Merciful Love is based on her profound insight into the love of the Heart of Jesus. Specifically, she recognized that Jesus’ Heart is full of mercy and that he longs to pour out his Merciful Love, especially on sinners.”

Philipps said, “Recognizing our littleness and our need for God’s mercy, I think if anything it kind of just opens your eyes to see that.”

Gaitley’s book is broken into almost five weeks, each week focusing on a different aspect of Divine Mercy.

According to the book, the first week is focused on the structure of St. Thérèse’s teaching, and how this structure was found throughout the Scriptures, especially in the life of the Mother of God, who found trust in the Lord.

The second week is focused on The Little Way, with the main focus being the life and teachings of St. Thérèse, stated the book.

The third and fourth weeks are focused on merciful love and the darkness of the world, with the last few days being a review, and according to the book, it is all written in very easy bite-size portions, given in daily doses.

2016-04-11
Previous Post: From high school cheerleader to head sports writer
Next Post: AUSTRIA ADVENTURES: Discovering the universality of the church through Mass