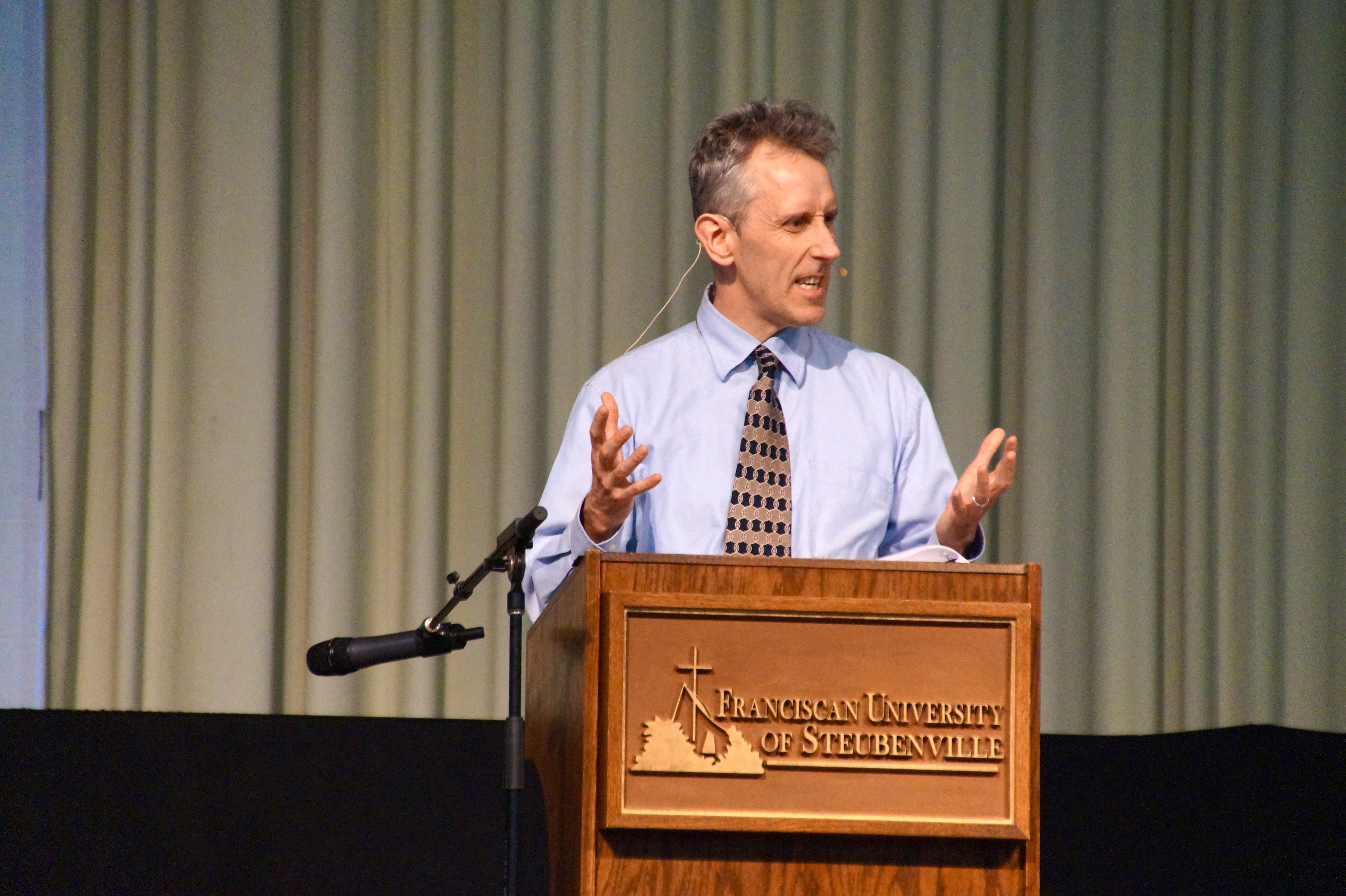 Franciscan University students experienced insight into the gift of woman in the church and the culture through talks by theologians April 15-16 at a conference organized by students and the university.

Newton, professor of theology at Franciscan, was the first keynote speaker. In his address, he explored the ecclesial vocation of woman in society and in the church.

“Women can read inwardly the truths of the human person,” said Newton. “Women evoke love, they kick start the process of love … and that softens a man’s heart.”

Newton compared men and women using the people who aided Christ in the crucifixion. Simon, he said, helped Jesus carry the cross as a task. Simon did what he had to do.

“Veronica,” Newton said, “is able to cut through the noise to get directly to the person at the center of the canvas.”

He noted how she was not told to approach Christ, she did it out of compassion and desire to know him. This is what women are able to do in their day-to-day encounters, he said.

He also noted that women have a particular “capacity for motherhood.”

Pope Francis has called every Catholic to do one spiritual work of mercy a day; however a mother, Newton said, does one “every five minutes” giving women a unique role in the church. The only people Christ praises in the gospel of Mark are women, Newton noted. One is the woman who broke the perfume jar to anoint him; the other is the one who leaves two coins at the temple.

“Ladies,” Newton said, “you are called to be snails; they always bring the home with them.”

Those who attended the talk took this humorous message to heart.

Freshman Kateri Mooney agreed, saying, “The first role for woman is in the home hit home for me. I want to be successful with a good job and career, but I also want to raise good kids and a good family. It hurts when other women don’t want to fulfill the role.”

Solenni, associate dean of the Augustine Institute, spoke on women in the body of Christ and in society. She acknowledged the role of women in the Bible and how their role extends to the modern view of feminism.

“Why is it that femininity is a dirty word?” she asked. “At the end of the day, the church is feminine She is the body of Christ.”

During the Crucifixion, John was the only apostle who stood at the foot of the cross. Solenni said that John would not have been there if Mary, the mother of God, was not there to comfort and strengthen him. She noted that the only person to whom Jesus revealed himself as the Messiah was the woman at the well, and she was not Jewish either.

“Women have the ability to see the person,” she said. “I think that’s what this woman did.”

The third keynote speaker was Waldstein, Max Seckler professor of theology at Ave Maria University. Waldstein translated the work of Pope St. John Paul II’s “Man and Woman He Created Them: A Theology of the Body.” His talk was titled “Where the Order of Love First Takes Root: Woman as Help.”

Waldstein pulled from the works of John Paul II’s “Mulieris Dignitatem” as well as writings of Joseph Matthias Scheeben and the book of Genesis. He also analyzed the painting of the Assumption by Italian Renaissance painter Titian.

Waldstein said the woman is seen as the ‘ezer,’ which means “fitting,” “right” and “just,” according to the book of Genesis.

Waldstein said she is the companion of the man, and he illustrated through seven points what her role is in relationship to the Holy Spirit, her prophetic mission, being the sincere gift of self and the gift of self and sacramental sign.

Waldstein said that by analyzing the painting of the Assumption, you can see the absolute depth and mystery of Mary’s relationship with God and her role as a woman.

Senior theology and catechetics major, Jeremy Duo said that “definitely the most obvious thing is the depth of the art, and thought and precision but also definitely the renewed understanding that he has given me of woman as help. Interested in Scripture myself as I am, the translations of the word was helpful and insightful.”

Savage, director of the master in pastoral ministry program at the University of St. Paul, spoke on the genius of men and women and how they complement each other. She compared men’s and women’s differences, citing multiple studies on the difference between the two but acknowledging how they are able to bring each other closer to the kingdom.

“They are equally inducted with intellect and freedom,” she said.

Ketschke, senior special education and early childhood education major, said she was happy with the results of the conference.

“Going through the evaluations,” said Ketschke, “I was blown away by the response of the students. Everyone who filled out the evaluations had nothing but positives to say.”

Ketschke said over 300 people registered for this event, and the largest attendance at one talk was 150 people.

Ketschke said the largest attendance was for Newton’s talk. Although the topics were very deep, and each speaker did a phenomenal job unpacking their topics, Newton told it in a way to which it was easy to relate, she said.

“The topics that we talked about this weekend are very philosophical, theological (topics),” said Ketschke. “And Dr. Newton just has a special charism of being able to take something that is so intellectual and make it relatable and understandable for the students.”

Ketschke said this whole conference was a group effort of students and the university.

She was honored and humbled by how Franciscan adhered to its mission statement in supporting students’ projects, said Ketschke.