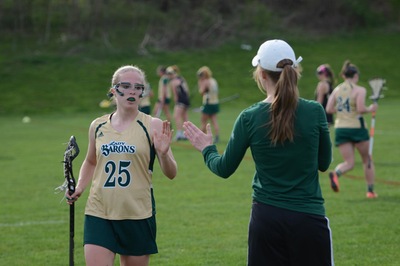 The Franciscan University women’s lacrosse team began their quest to best last year’s 8-5 record with a 10-4 defeat by Ohio Northern University in their Feb. 25 season opener.

This game was on the home field of the Ohio Northern Klondikes. The Klondikes got on the board first, scoring less than four minutes into the opening quarter. The Lady Barons, still obviously searching for the right defensive adjustments, would surrender four more goals within a span of just nine minutes. Franciscan would commit 20 turnovers in the first half alone, as they continued to search for the right combination of players offensively.

With 9:14 to play in the first half, junior midfielder Elizabeth Dawyot caused one of Ohio Northern’s 16 first-half turnovers. Sophomore attacker Carly McDonald, assisted by fellow sophomore attacker Treise McCarthy, successfully converted the advantage into the first goal for the Lady Barons this season, cutting the Klondike lead to 5-1. Franciscan would allow one more goal, a free position shot, with 6:29 to play, entering halftime down 6-1.

Defensive mismatches and a turnover margin which favored Ohio Northern would see the Klondikes increase their lead to 9-1, with just 6:21 gone into the second half. Sophomore midfielder Elizabeth McEntee would net an unassisted goal for the Lady Barons, adding another point to Franciscan’s 9-2 deficit.

With 17:16 left in the second half, ONU registered another goal to go ahead 10-2, in a lead they would not relinquish. A free position goal by junior midfielder Mary Krolicki and an unassisted score from Dawyot would conclude the game on a positive note for Franciscan.

Following the game, Coach Maura Conant commented on the positives on the first competition of the Lady Barons’ promising season.

In a statement published by the university athletic department, Conant said, “Today was the first time we got to really play together as a team. There are definitely things we need to work on but today was a good first step.”

The Lady Barons lacrosse team next takes the field Wednesday, March 1, against Muskingum University, at 4:00 p.m.

2017-03-06
Previous Post: Letter from the editor: I disagree with you, I don’t hate you
Next Post: The art of not listening