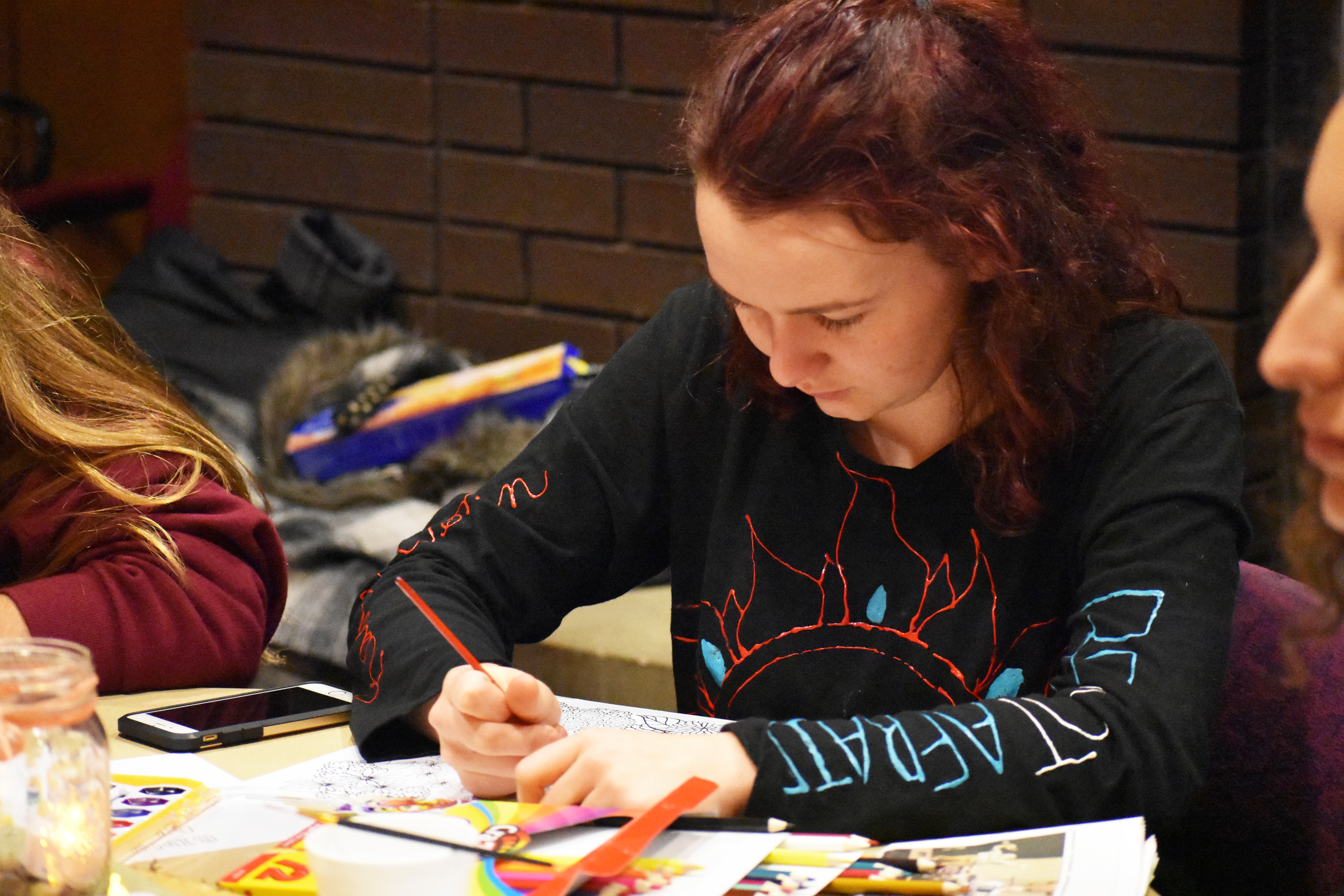 Wednesday night at the Fireside Lounge, dozens of women colored, painted and prayed at Women’s Ministry’s “Art with Edith” event.

The event, another installment of the ministry’s Wednesday’s Women at the Well, gave students the opportunity to create artistic designs while learning about St. Edith Stein. As the women doodled, members of the ministry spoke about Stein’s teachings on femininity.

The focus of the talks was what Stein described as the five qualities of a woman’s soul: warmth, clarity, quietness, expansiveness and emptiness of self. Specific quotes from Stein’s teachings were taken from the book “Embracing Edith Stein: Wisdom for Women from St. Teresa Benedicta of the Cross” by Anne Costa.

The Women’s Ministry Core Team began by discussing warmth, which the women said was “the power to melt hearts.” In her writings, Stein referenced the Holy Spirit, who is often depicted as a flame; she said that one finds the Holy Spirit in “all works of womanly love and compassion.”

Clarity was described as the knowledge and understanding of the self in the light of Christ. The goal of clarity, Stein said, is “being mistress of oneself so as to fully give of oneself.”

The Core Team said that quietness is the “natural state our soul seeks.” It is the inner peace women experience in Christ. The women leaders quoted Stein as saying that, when searching for this, “the best way is before the tabernacle.”

Expansiveness was defined as openness to all people. Stein taught that all women should be spiritual mothers and that their principle interests should be directed towards others.

Finally, the evening stressed emptiness of self. Stein held that women have a natural ability and desire to give themselves to others. Stein said that a woman should be a “handmaid” for God and for all those that God desires she serve.

Born into a German Jewish family in 1891, Stein was inspired to convert to Catholicism by the writings of Saint Teresa of Avila. Stein was a philosopher and a teacher, and she eventually became a Carmelite nun, taking the name Teresa Benedicta of the Cross. She died in a World War II German concentration camp on Aug. 2, 1942.

The women in attendance were very pleased with the event, and they left with both personal artwork and the life advice of a saint. “I like being able to talk about Edith Stein. … It was interesting to be able to relate her life to what we’ve done with our lives,” said alum Dorothy Sewing.

Sophomore Emma Konizeski commented on how well the Women’s Ministry presented the information. “They really allowed their own personalities to shine through that, which I think was wonderful,” she said.