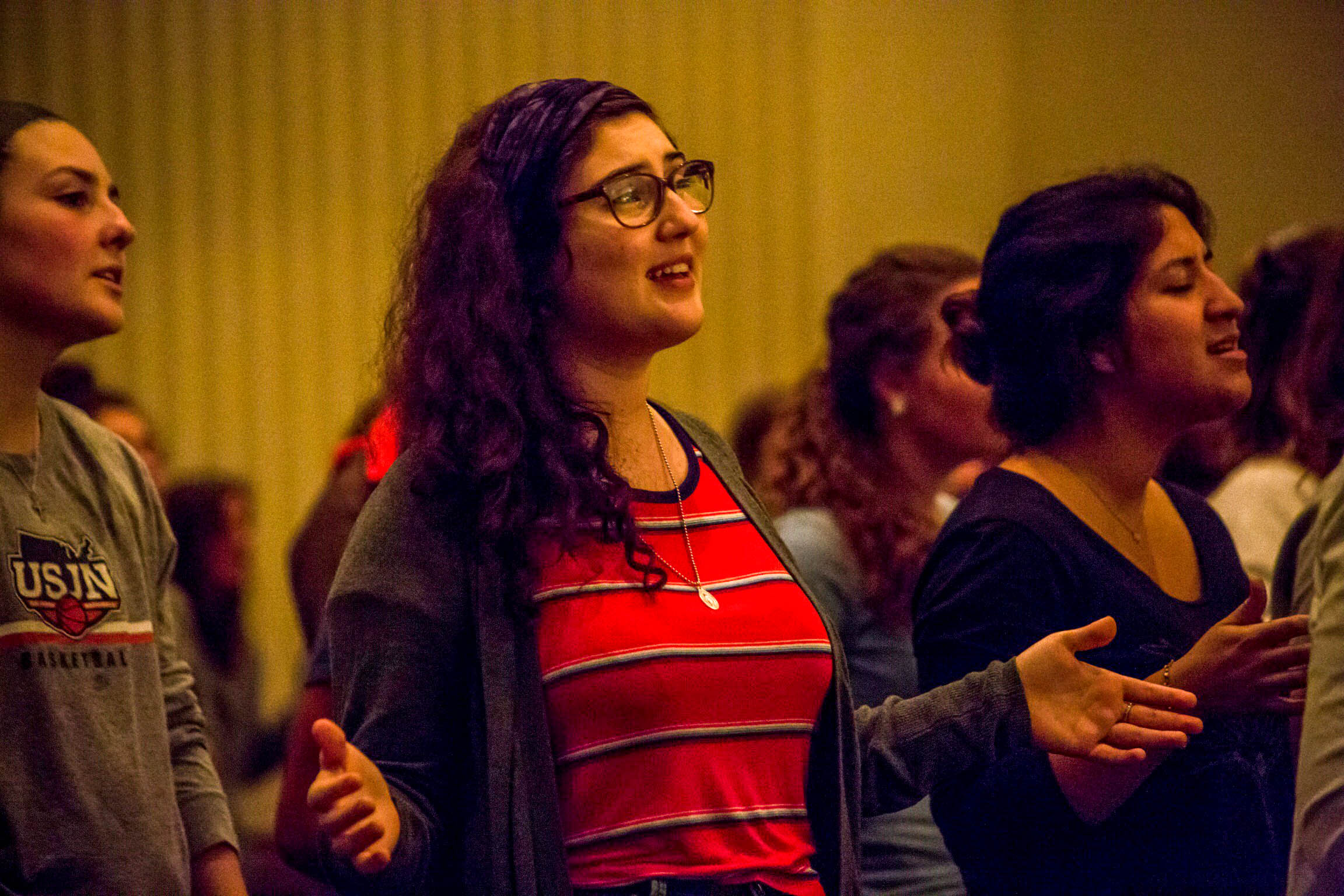 On Oct. 5, over 100 women gathered in Christ the King Chapel for a special Eucharistic procession and holy hour for women put on by Franciscan University of Steubenville’s Women’s Ministry.

At 9 p.m., Sister Maria Pio Wiggins, TOR, head of Women’s Ministry, opened the night with a welcome and rundown of events, then introduced the Rev. Nathan Malavolti, TOR, who read from the Gospel and led the Eucharistic procession.

Malavolti read the Gospel account of the hemorrhaging woman, who was healed after touching the cloak of Jesus, from Chapter 8 of the Gospel of Luke.

Wiggins offered a meditation on the story; she encouraged all the women to picture themselves in the place of the hemorrhaging woman, asking them what their own burdens and sufferings are. The women then wrote these reflections on paper hearts and dropped them into a basket at the foot of the altar, which represented giving their own hearts and problems to Jesus.

“Jesus, You can heal me with Your mighty power,” Wiggins said as part of her meditation. She encouraged women to approach Jesus with love and faith, asking for his mercy and healing.

Malavolti processed around the chapel with the monstrance, and women gathered at his feet to get as close to the Sacred Host as possible, many even grasping at the humeral veil in imitation of the hemorrhaging woman.

Malavolti proceeded with the traditional prayers of exposition and benediction, including the singing of the “O Salutaris Hostia” and “Tantum Ergo,” as well as the recitation of the Divine Praises. In addition, the women sang modern worship songs, including “O Come to the Altar” and “How He Loves.”

The event lasted nearly two hours and left many women in the audience feeling deeply moved. “I … prayed that I’d be able to feel God’s presence … and I did,” said sophomore Brookelynne Schnurpel. “It was beautiful.”

Freshman Tonianne Zottoli also attested to the powerful effects of the adoration. She said, “I know the Lord definitely put on my heart, and literally on the hearts that we had written on, the things that I had been meaning to pray about … He really just weeded them out of me, and I really needed that.”

This event was one of many put on by the Women’s Ministry, which hosts weekly Women at the Well events on Wednesday evenings and periodic special events on Thursdays.

2017-10-16
Previous Post: Liberal Column: War between the DPRK and the United States
Next Post: Testament of faith: looking back at history of stations