Women’s tennis team fights back into running for championship 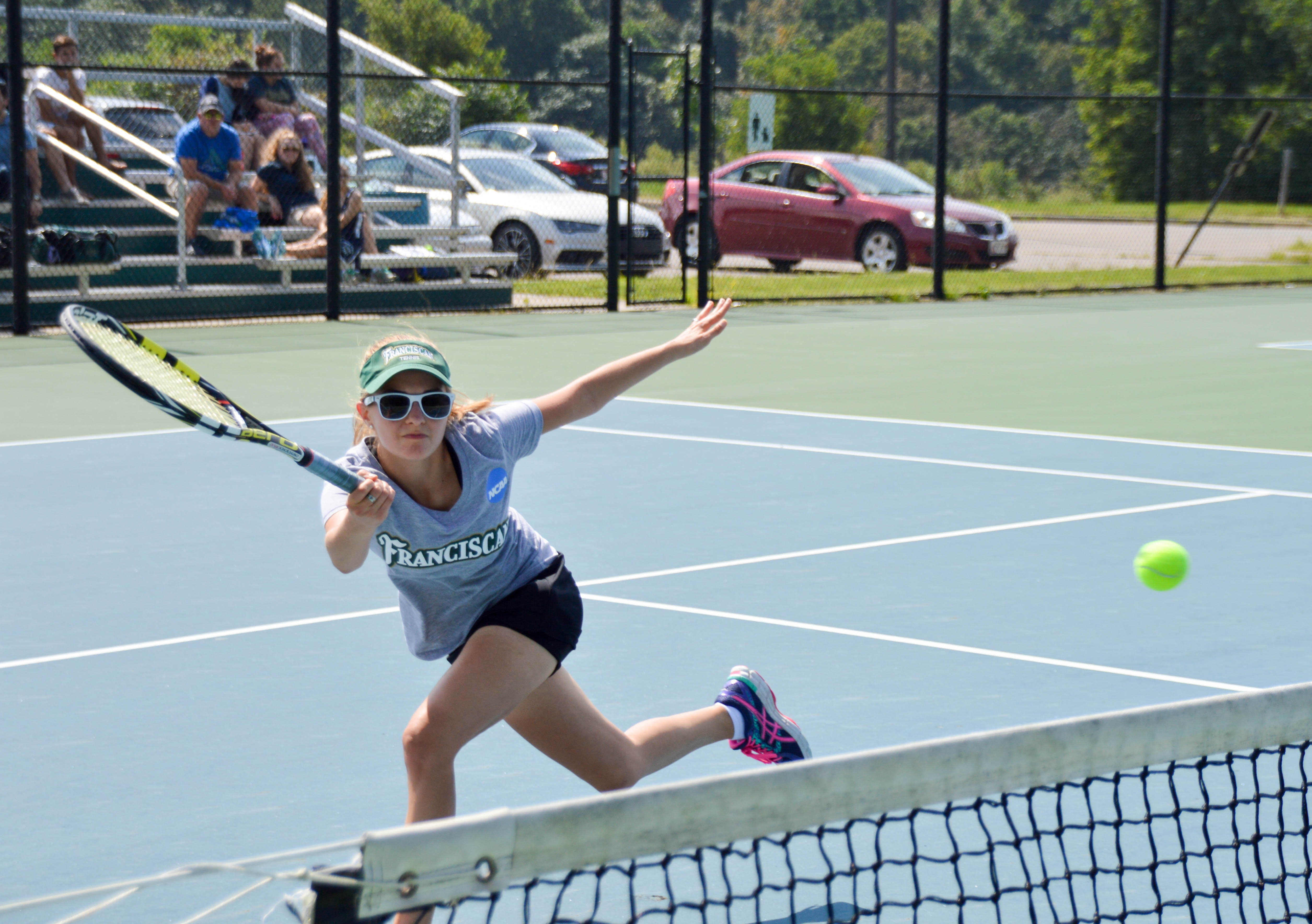 After a nail-biting 5-4 loss to Westminster College on Saturday, the Franciscan University women’s tennis team put their campaign for a second-straight AMCC Championship back on track, via a decisive 9-0 win against conference opponent Penn St.-Altoona on Monday.

Windy conditions tested both teams as doubles play commenced, just after 1 p.m. Seemingly resuming from where they left off against Westminster, No. 1 doubles duo Madelyn Conrad and Maria Binette never wavered during an 8-0 victory on court one. The sophomore-junior tandem kept points short, finished at the net and broke serve early and often during the win.

Head Coach Scott Greve elected to alter the No. 2 and No. 3 doubles lineup for the match, and the results were overwhelmingly positive. Junior pair Julia Razook and Taranee Karimpour were the picture of consistency at their 8-2 No. 2 doubles win, especially at the net. Their Altoona counterparts never found an answer for penetrative volleys.

After senior captain Emmy Mathias and sophomore Gracie Hammel overwhelmed their opponent’s with a combination of groundstroke velocity and service consistency for an 8-6 victory, the Lady Barons took the courts for singles play, already up 3-0.

At No. 1 singles, Conrad capitalized on an immediate break of serve to accrue a 2-0 lead. She kept her points quick, dictating her will from the baseline, never allowing her opponent to find consistent footing. A 6-3 first set was quickly followed by a 6-0 second, as more deep ground strokes and punctual volleys put the match away.

Two courts to her left, Razook anchored the No. 4 singles spot, forcing her opponent to hit off-balance shots and finishing points on her own terms. The junior has effectively returned to form after a hiatus in Austria, as evidenced by her dominant 6-0, 6-0 win.

No. 6 singles was a constant battle that ultimately went Franciscan’s way. Seeing her first action of the season, senior Marisa Pinto retook the momentum down 2-1, to take a 3-2 lead, keeping her rallies shorter and dictating points from behind the baseline. Down 5-6, Pinto brought the first set to a tiebreaker, a contest she won 7-2. Her 7-6 first set opened the match wide open, and Pinto registered a much quicker 6-0 second set for the win.

Mathias ran her opponent from sideline to sideline at No. 5 singles. She demonstrated a willingness to finish rallies at the net and made her opponent fight for every point. Mathias’ 6-4, 6-3 victory was a testament to her ability to outlast opponents.

At No. 2 singles, Binette continued to show improvement over a successful sophomore campaign. She sent topspin-laden ground strokes deep into her opponent’s backcourt, taking advantage of short returns to rush the net. Maria was all over the court during her 6-1, 6-4 win, despite brief service inconsistencies at 5-2 in the second set.

Hammel fought both groundstroke consistency and a solid opponent at No. 3 singles. Down 4-1 in the first set, the sophomore found her footing, and rattled off five straight games to take the set 6-4. Serving first in the second, she fought off high backhands and rode strong service games to a 6-3 set win and a match victory.

The dominant 9-0 win against a quality conference opponent seems to be an indication of great things to come for the Lady Barons. After two crucial away matches against La Roche and Pitt.-Greensburg, respectively, the Franciscan women’s tennis team will take to its home courts again on Tuesday, September 12, at 4 p.m. against Allegheny College.