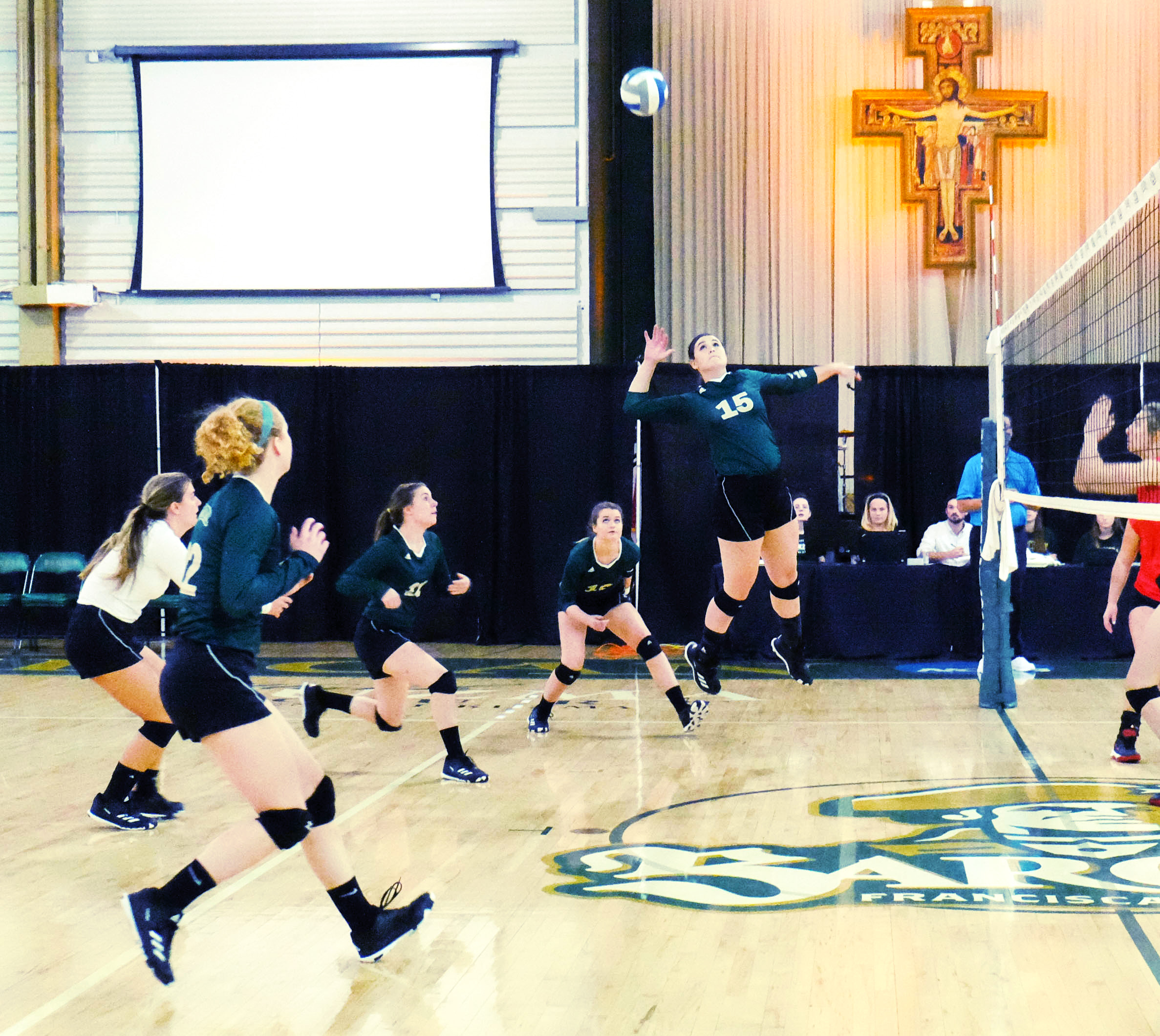 In one of the most anticipated events of Franciscan University’s Homecoming Weekend, the Lady Barons volleyball team took on visiting, non-conference opponent Washington & Jefferson College. The women impressed packed bleachers, despite a 3-0 loss.

With parents in attendance at Hank Kuzma Court in Finnegan Fieldhouse, play began just after extended lineup introductions at 2 p.m. The Presidents quickly accrued a 6-1 lead, backed by four Lady Barons’ attack errors and dominant play from the front row. A kill from junior outside hitter Maria Ciola briefly halted the Washington & Jefferson scoring barrage, before the Presidents stretched their lead to 10-2.

The Lady Barons came alive down eight points, adding a kill from sophomore outside hitter to back-to-back Washington & Jefferson attack errors. Now within five points, the Lady Barons found themselves on the wrong end of a six-point scoring run from the Presidents, before adding another Ciola kill for a 10 point, 16-6 deficit.

The Lady Barons were unable to close the gap down the stretch in the first set, though two successive three-point scoring runs briefly minimized the deficit to single digits. A solid front row block from senior team captain Monica Rigaud erased one set point, but an attack error on the ensuing point by freshman defensive specialist Lauren Betar put a 25-16 first set into the books.

After switching sides, the Lady Barons kept things close at the onset of the second set. Quite obviously bolstered by the spectators’ collective energy, Franciscan transformed a 6-4 deficit into a 9-8 lead, courtesy of five kills in as many minutes. Freshman outside hitter Anna Telepak’s dominant kill, together with a kill from sophomore outside hitter/defensive specialist Maddie Raffa, helped to provide Franciscan the lead, before kills from Rigaud, Raffa and sophomore right hitter Meghan Bayer kept the Lady Barons on top.

The teams traded points to 11-10 in favor of Franciscan, until Washington & Jefferson’s four-point run provided the visiting team a second set lead they wouldn’t relinquish. The Lady Barons kept things close as the second set neared its conclusion, with kills from Ciola and stellar freshman setter/defensive specialist Sydney Riley, and a timely service ace from defensive specialist/libero Maddy Demos.

Crown support and another Rigaud kill were overshadowed by inconsistent Lady Baron front row hitting, allowing the Presidents to add another set to their lead. A Washington & Jefferson service ace sealed the second set in their favor.

The third set was statistically the best for the Lady Barons. The women led 11-9 halfway the set itself; team captain Monica Rigaud was all over the court for the Lady Barons, anchoring Franciscan’s defensive efforts with renewed effort. Though the Presidents assumed an 18-14 lead, the Lady Barons took their visiting opponents the distance, subsequently erasing their opponent’s set lead and adding a Ciola kill for the 19-18 lead.

Down 24-21, the Lady Barons erased their first faced match point, as Bayer sent a dominant kill past outstretched Washington & Jefferson fingertips. The Presidents responded a point later with a kill of their own, etching their 3-0 victory in the record books.

The loss drops the Lady Barons to 4-13 on the year; Ciola led the squad with 12 kills, while Demos registered 15 digs.