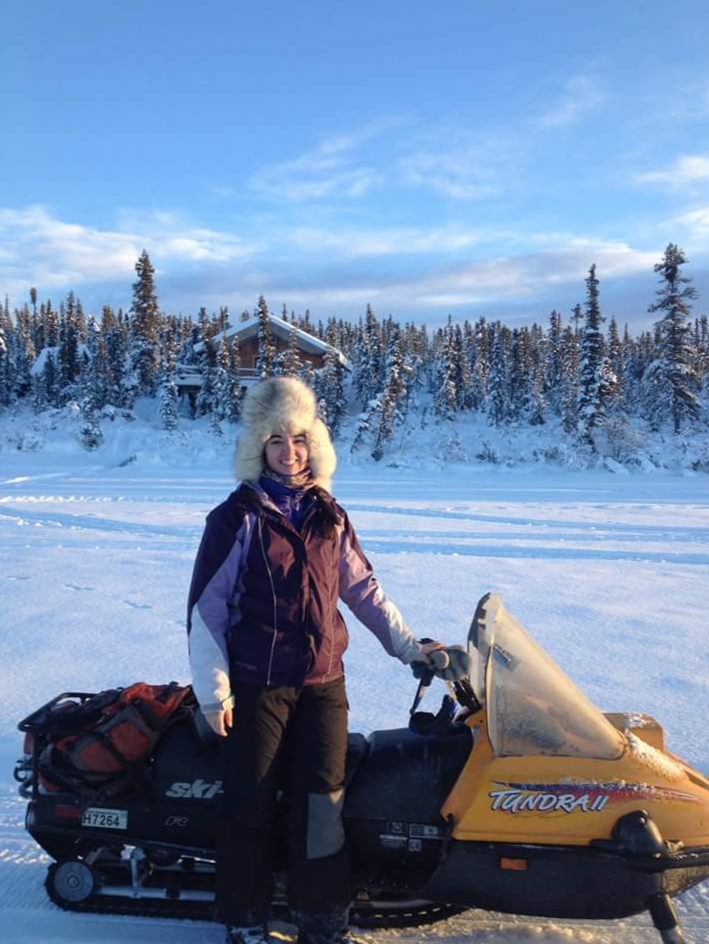 Franciscan University students are familiar with spending a week over spring break in a place like Haiti or Arizona doing various mission work such as visiting the sick, bringing fresh water to those in poverty and teaching the faith. Very few ever consider a full-year mission trip, and even fewer think of spending it in Alaska.

One student has this vision.

Melody Doudna, a senior education major and native of Alaska, wants to give back something to her home state and feels she will accomplish this through mission work and bringing the Catholic faith to those in the isolated communities of Alaska.

“There’s just so much that I can see growing up as an Alaska Catholic, on fire for my faith, that these people are missing out on,” said Doudna. “They see a beautiful mountain, but they don’t see the God who created it.”

Doudna said her vision for this mission is to gather together a small group of Franciscan students and bring them up to the Fairbanks diocese, where she is from, and begin catechizing the local parishes.

“We’re going up there to work with the priests, to work with the bishop of Northern Alaska and to bring the Gospel to the different bush communities out there (as well as) to the town community of Fairbanks,” said Doudna.

A bush community, Doudna said, is all parishes that are off the road system. There are a total of 46 parishes in Alaska, but only eight on the road system. Many of the parishes can be reached only by flight and ice roads in the wintertime.

“So that would be a huge part of mission,” said Doudna, “going out to those isolated areas and really bringing catechetics and the Gospel out to them.”

Doudna said she realizes this mission work looks slightly different from most mission trips students are familiar with.

“There are different types of poverty, and many people think of Alaska as the oil fields, (but) there is poverty, and there is more poverty of the faith,” said Doudna.

“The people of Alaska have a form of old paganism and new paganism, which is not real faith and is more of a cop-out,” said Doudna.

Doudna, being herself an education major, has opened up this mission work to anyone who is interested, not just catechetics majors, and has partnered with the Catechetical Institute at Franciscan University to help with the training.

“All students, whether studying catechetics or not, will be trained through the Catechetical Institute on campus for three weeks after graduation in June,” said Doudna.

This has not been Doudna’s vision alone, but has been partnered with the Ad Gentes mission house in Steubenville, that opened in September.

The Ad Gentes mission house has also funded and facilitated mission trips such as Russia, Ukraine and Ireland, said Doudna.

Doudna said Heather Perry, who runs the mission house, has reached out to Petroc Willey, who holds a doctorate in sacred theology, and the Rev. Michael Shields, a missionary priest who has participated in Russia mission with Franciscan students in the past, to help fund this mission.

Alaska is the first mission to bring catechetical mentors out from Franciscan to people out in the world, said Doudna.

“There will be catechetical mentoring–both online and in person–and there will be working with families, children, visiting sick and homebound, and putting on different retreats,” said Doudna.

The mission has been advised by Rhett Young, director of Missionary Outreach, but is not directly connected to the office, said Doudna.

“The Mission Outreach Office has been so helpful in many ways,” said Doudna. “We’re getting a lot of advice how to fundraise, how to form people, but it is in no way connected to the university.”

Doudna said the missionaries will be working closely with the bishop to understand the needs of the diocese.

As of right now, Doudna said she is only reaching out to Franciscan students, but hopes to eventually open up to other young adult groups outside of the Franciscan circle.

Doudna said, “It’s made the most sense to recruit Franciscan students, because there are so many young Catholics here who have a heart for mission, and I just want to give them first opportunity at this mission.”

Doudna said she only plans to be involved the first year, and hopes to see it continue on after that.

“Talking with Heather, working with the Ad Gentes mission house, we want to see this mission keep on going,” said Doudna.

“It’s not only great for Alaska, but also great for young adults to learn not only how to do mission work, but how to do it in your own country,” said Doudna. “So I see it going for a very long time.”

“It’s where my heart is,” said Doudna. “These last four years (at Franciscan) have been amazing, and they’ve helped form me so much intellectually and spiritually, but I really received the base of that through the beauty and dangerous life of Alaska.

“I want others to experience that, whether it’s being missionaries, or even helping Alaskans to really love their state,” said Doudna.